Sun is an abundant source of energy that is capable of supplying sustainable energy to all of humanity. After you have familiarized yourself with the material in the "Review" section of this lesson, you can see that Solar energy can be used for different types of applications that range from a basic solar cooker to photovoltaic technology. A summary of the most common usages of solar energy is shown in Figure 1.1.

There are various applications of solar energy conversion systems. The first is seen in conjunction with photovoltaic technology and directly converts solar radiation into electricity. The second converts solar energy into heat for such applications as solar hot water, passive solar heating, solar space heating or cooling, and solar cooking. Finally, there is the conversion of heat into electricity, or solar thermal electricity, which utilizes concentrating solar power (CSP) devices such as reflectors and concentrators. 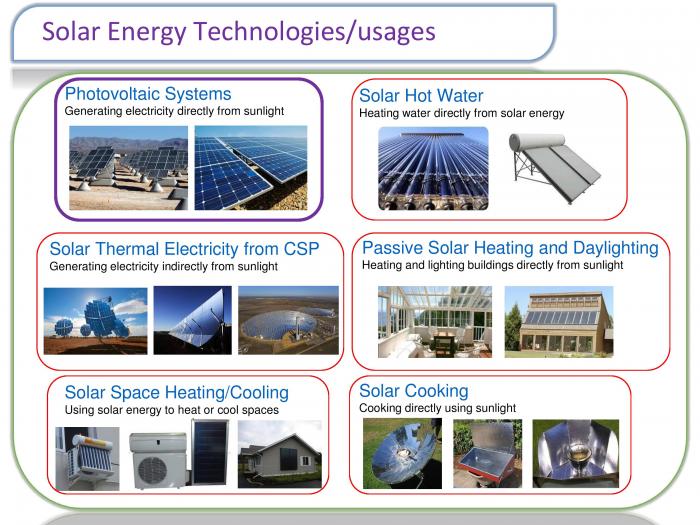 Since solar energy seems to be a valid option for most of our everyday needs, why don’t we use solar to electrify the entire world?

As can be seen from Figure 1.1, Photovoltaic (PV) and Solar Thermal Electricity (STE) are the main technologies that are widely used to generate electricity from the sun and which utilize receivers and concentrators, as discussed earlier in other classes found via the Review page in this course. STE uses Concentrating Solar Power technologies (CSP) to focus direct light and convert it into thermal energy and then finally convert it to a usable Electrical Energy, while Solar Photovoltaic systems (PV) directly convert solar radiation (both direct and indirect) into electricity. Finally, there is a new trend in PV utilizing lenses to concentrate solar radiation for higher efficiency while using more advanced PV technology to convert sunlight into electricity. That technology is referred to as Concentrating Photovoltaic, or CPV for short.

To learn more about the CPV and CSP please refer to "EME 812 (5.1. What are concentrating photovoltaics?) and EME 812 (7.1 Introducing Concentrating Solar Power)." (Note: links are also located on the Review page of this Lesson.)

Let's return to the question, "Is solar energy considered a valid option for electricity generation?"

In order for us to answer that question, we need to take a look at some data gathered by the International Energy Agency (IEA). In their Photovoltaic roadmap and Solar Thermal Electricity roadmap in 2014 (links available under "Required Readings" on the first page of the lesson), IEA discussed the potential for electricity generation from solar energy in large scale. Recently there has been a significant increase in the share of solar electricity installations that contribute to the global electricity grid. Some countries are more progressive and others are trying to follow the lead. For the purpose of this class, we will start with some facts about one of the fast growing and emerging solar markets in the world, which is the US market, and the factors that affect the development of such new technology in the energy market. But why are we saying solar in the U.S. is a growing market?

Observing the added capacity percentage of different energy sources within the period from 2010 to 2020 in the US, we can see that Solar is gaining more of a percentage share (an increase from 4 percent in 2010 to 43 percent in 2020) when compared to traditional fossil fuel sources, such as coal or natural gas, as illustrated in Figure 1.2. The promising news about renewable energy and Solar in particular is that the majority of the recently added electricity comes from renewable resources including Solar. Recently, most utilities are retiring their coal plants and more are interested in Solar power. As we can tellThat said, the next few years will witness more solar installations, and the target expected by the IEA by 2050 can be achieved.

Readers are encouraged to read more about the market insights from the GTM Research website linked below the figure. 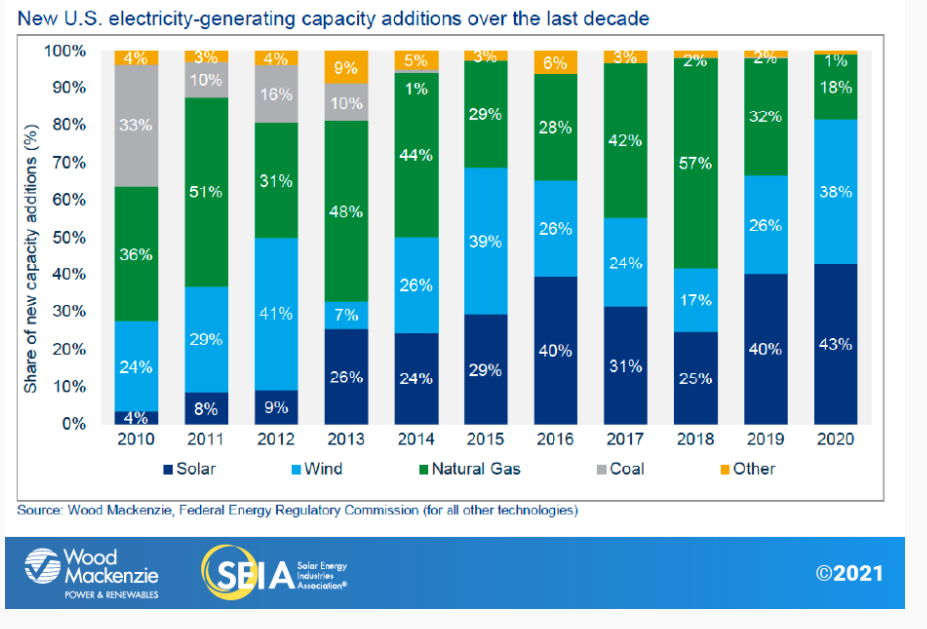