Improving module efficiency is only one way to extract more energy from the module. However, what matters ultimately is the energy yield of the PV at the system level.  So the question is: What can we do at the system level to increase the yield of PV systems?

Besides the semiconductor material used for PV modules, there are only two parts that play roles in improving the performance of a PV system: electrical and mechanical. The electrical part is responsible for tracking the maximum PowerPoint (MPP), which is a tool to ensure that the PV module operates at the MPP on its I-V curve under a given set of irradiance and temperature. This unit is not something a designer can optimize or change to improve performance during the design phase of a PV system. For those who are not familiar with MPP tracker, you may refer to EME 812 (6.2 Main components of the PV systems) and EME 812 (11.3 DC/DC Conversion).

The other piece is the mechanical part of the PV system that indeed can be optimized by the designer to improve the amount of light falling on a PV array.  The simplest way to maximize the solar utility is done by physically changing the orientation and tilt angle of the module, as discussed in EME 810 (Lesson 2: Collector Orientation) and EME 810 (Lesson 6: Project Locale).

As a result, we see the need for tracking the sun using a mechanical tracking system.  You may refer to EME 812 (Lesson 3: Tracking Systems) for details about the types and technologies of tracking systems.   As the majority of PV systems are fixed mounted, a single choice for orientation and tilt throughout the year changes depending on the geographical location, as discussed in EME 810 (Lesson 6: Project Locale).

The question remains, how does irradiance affect the PV output? We learned in our review of EME 812 how irradiance and temperature affect the output of a PV cell. A quick recap will tell us that when all parameters are constant, the higher the irradiance, the greater the output current, and as a result, the greater the power generated. Figure 2.7 shows the relationship between the PV module voltage and current at different solar irradiance levels. The image illustrates that as irradiance increases, the module generates higher current on the vertical axis. Similarly, we can observe the voltage and power relationship of a PV module at different irradiance levels. We can see that as irradiance increases, the module is able to generate more power, represented by higher peaks on the curves in Figure 2.8. 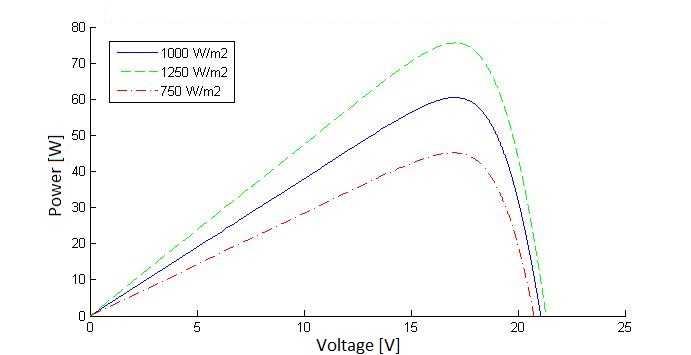 The relationship between irradiance and modules’ current and power can be expressed as the following:;

Where G1 and G2 are the irradiances (in W/m2), I1 and I2 are the modules' corresponding current (in A), and P1 and P2 are the resultant power when irradiance changes (in W).

The following example illustrates how to find the optimal tilt angle for a fixed mount PV system.  If we go to State College, PA and use the chart that was developed in EME 810 (Lesson 2: Sky Dome and Projections) we can see that State College, PA has a latitude around 40.79° in the Northern Hemisphere. In this case, the lowest elevation angle of the sun at solar noontime is around 26° and the highest is around 75°. If we have a tilt tracker, it would vary the range of angles throughout the year between 26° to 75°.

How can we find the tilt corresponding to the maximum yield? This is done using tools developed to calculate the annual energy generation from a PV array given the design tilt and azimuth angles. Some references and designers prefer to set the tilt angle to match the latitude of the selected location as a rule of thumb. However, that does not necessarily maximize the annual energy production of the PV system, as discussed in EME 810 (Lesson 6: Project Locale).

In general, a lower tilt angle helps improve production in the summer months, whereas higher tilt angles favor lower irradiance conditions in the winter months. Designers should take into account the cost of racking and mounting hardware, which can be minimized by lower tilt angle and also minimize the risk of wind damage to the array. So without tedious mathematical calculations, and in order for us to find the optimal tilt and azimuth angles, solar designers can use simple tools developed by NREL. As you were exposed to in Lesson 1, PVWatts is a freely available online design tool and it helps designers calculate the annual energy production using simple parameters to maximize the solar utility for the location.

Going back to State College, PA, and since we have fixed panels oriented towards the South, the optimized tilt angle that will give the maximum energy yield is around 30-35 degrees.