Pluto and the Kuiper Belt

We know that the Sun contains the vast majority of the mass in the Solar System. When we studied Kepler's Laws, we found that we can calculate the orbit of the planets just by figuring out how much the gravitational force of the Sun pulls on each planet. It turns out that this is mostly true. In reality, the gravitational pull of every planet does make minor perturbations on the orbits of the other planets. For example, Jupiter slightly alters the Earth's orbit (and vice versa), Saturn slightly alters Neptune's orbit (and vice versa), and so on. After the discovery of Uranus, astronomers noticed that its orbit was being perturbed by a larger amount than could be accounted for by the other planets known at that time. Thus, they predicted that another massive planet must exist beyond Uranus. Neptune was discovered based on these predictions. Even after this discovery, though, astronomers felt that perturbations in the orbits of Uranus and Neptune meant that another planet must still exist beyond Neptune.

Based on these predictions, Clyde Tombaugh carefully studied photographs of the sky and found a faint object that was moving compared to the background stars. The object discovered was not massive enough to perturb the orbit of Neptune, so its discovery appears to have been accidental! This object was named Pluto and was determined to be the ninth planet in the Solar System. However, as we have learned more and more about Pluto since its discovery, it appears to be different from our expectations in a number of ways.

The story of the discovery of Pluto and the controversy over its current status is summarized very well in the book, Is Pluto a Planet?

Another excellent book that discusses the discoveries of other, massive objects in the same part of the Solar System is How I Killed Pluto and Why it Had it Coming. This is my personal favorite astronomy book, and I recommend it highly.

First of all, you should realize that Pluto is, by far, the most difficult of the nine historical planets to study. It is very distant and very faint, and so, prior to July 2015, no satellite had visited Pluto. The NASA New Horizons mission performed a flyby of the Pluto system in mid-2015. The Hubble Space Telescope is not powerful enough to reveal much about the planet Pluto. Compare these Hubble Space Telescope images of Mars (top image) and Pluto (bottom two images) to see the difference in the quality of data on the two planets. 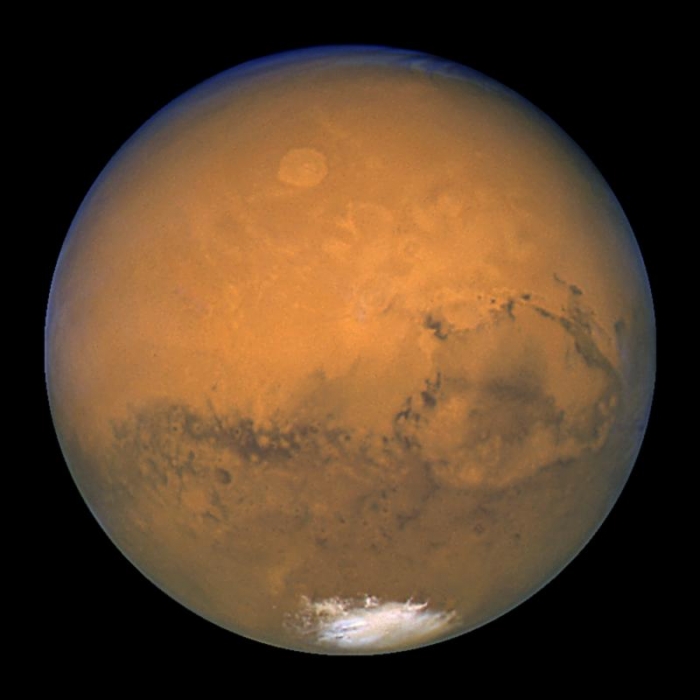 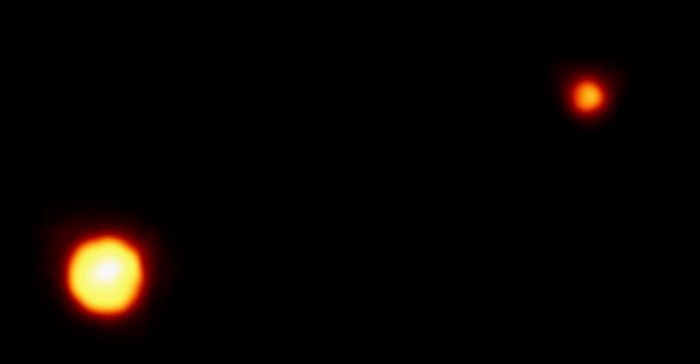 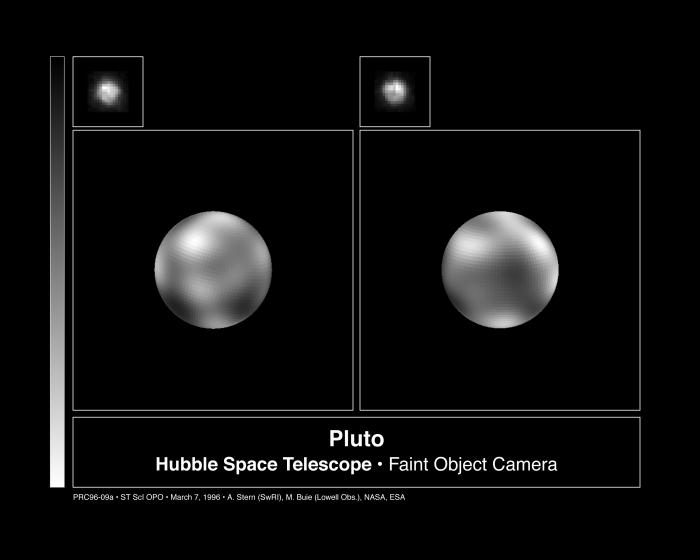 Now that New Horizons has provided us with much higher resolution images of Pluto and Charon, it is clear how fascinating these worlds are. The scientific work in analyzing these images is not yet done as of your time working on this course, however, many surprises have already been discussed by the New Horizons team. In particular, Pluto's surface appears to be much more active than was expected. 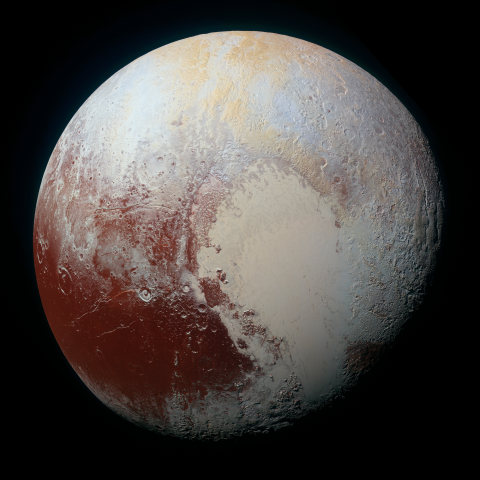 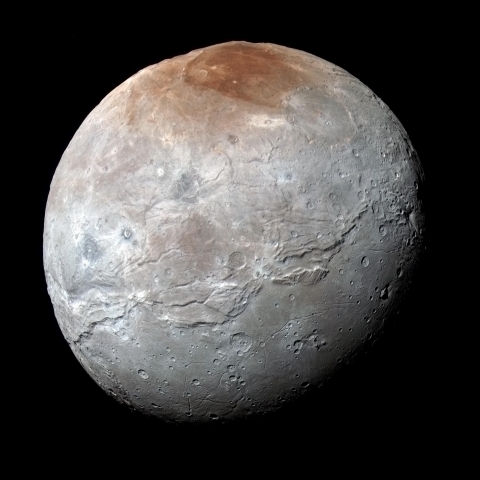 Prior to New Horizons study of Pluto, we discovered from the ground that Pluto has one large moon, called Charon (pictured above), which is roughly half the size of Pluto. Pluto is approximately 2300 kilometers in diameter and Charon is approximately 1300 kilometers in diameter. By observing the two objects orbit each other, we can also calculate their masses using Kepler's laws. We find that Pluto contains less than 1% of the mass of the Earth, and Charon is about 10% of Pluto's mass. Combining our knowledge of the mass of these two objects and their sizes, we can calculate their density, which comes out to approximately 2 g / cm3 and suggests that these objects are a mix of ices and rock. 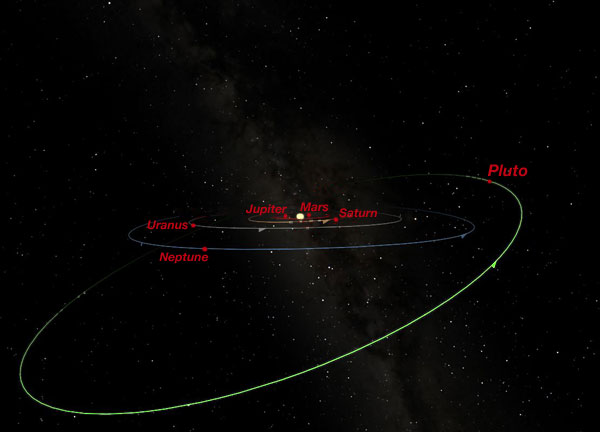 Figure 11.29: Schematic of the orbital planes of the objects in the Solar System
Credit: Penn State Astronomy & Astrophysics; Created with Starry Night

In recent years, there has been some controversy over the classification of Pluto as a planet. It is much smaller than the outer planets, and in fact, it is smaller than many moons, including Io, Europa, Ganymede, Callisto, Titan, and Triton. Its peculiar orbit also suggests that it may have had a different origin than the planets. Some astronomers suggest that perhaps Pluto is not a planet after all, but a different class of object. Recent discoveries of other, similar objects suggest that Pluto may be just one of a family of objects outside the orbit of Neptune.

Beyond Neptune, astronomers have discovered a large population of objects with sizes of about 100 kilometers or so up to more than 2000 kilometers. These are called “Kuiper Belt Objects” or KBOs, after the astronomer Gerard Kuiper. There is some controversy about whether or not Kuiper predicted the existence of the objects that are named after him, so sometimes the class of objects are more simply referred to as trans-Neptunian objects or TNOs.

The Kuiper Belt is a region of space in the Solar System that is donut-shaped. Its inner radius is just past the orbit of Neptune at 30 AU, and it extends out to perhaps 50 AU or farther. The thickness of the Kuiper Belt is approximately 10 AU. Inside of this region perhaps up to 100,000 KBOs orbit the Sun!

Recently, several large objects have been discovered in the Kuiper Belt that has sizes similar to Pluto's moon, Charon. Some have formal, approved names, and others have informal names. The largest of these objects include: Quaoar, Haumea, Makemake, Orcus, Ixion and Varuna. There is an excellent, well-maintained image of these objects to scale at Wikimedia Commons. To get a general idea of the properties of this class of objects, you can investigate further Quaoar as an example.

The discovery of these objects in the Kuiper Belt with sizes comparable to Charon suggests that there are more large KBOs left to be discovered. Because these objects are small and extremely distant, they are difficult to observe. The brightness of many of them is comparable to some of the faintest stars in the Milky Way and to some of the faint galaxies in the Hubble Deep Field. Although several groups of astronomers have searched the sky for KBOs and found many of them, they expect that perhaps a few dozen more 1000 kilometer size KBOs remain undiscovered. There may even be several Pluto-sized KBOs, too. In 2016, it was suggested that there may be a planet similar to Uranus and Neptune in the Kuiper Belt based on evidence from the motion of several unusual KBOs. This object is being referred to as "Planet 9" by the researchers who proposed its presence, but it has yet to be found if it does in fact exist.

In 2003, an image taken by the team that discovered many of the other large KBOs included an object that was provisionally named 2003 UB313. Initial estimates revealed that it was perhaps larger than Pluto. For this reason, its discoverers and many in the community were expecting it to be named the tenth planet. The International Astronomical Union (the IAU) is the organization that approves the names of newly discovered objects in the Solar System. In 2006, they took on the task of defining the word planet. Instead of adopting a definition that would classify 2003 UB313 as a planet, they created a category of objects called dwarf planets. A side effect of this decision is that Pluto no longer fits the definition of a planet, but is classified as a dwarf planet too. After this decision, 2003 UB313 was given its official name of Eris, and we now know that it is more massive than Pluto, although the objects have been found to be quite closely matched in diameter.

While the new definition of a planet is firmly grounded in science, the names of classes of objects is really an issue of semantics. The point I impress when I'm teaching about the Solar System is that Pluto is still as large and as massive as it was when it was discovered. It follows the same orbit, and all in all, it is identical to the object it was before it was demoted from planet status. I think the terminology of dwarf planet is unnecessary. Instead, I prefer to point out that Pluto was the first large KBO discovered, and rather than being an oddball of a planet, it is the prototype of the class of large KBOs.  I like to flip this particular question around with my undergraduate students.  In classes where I have time and the resources, I ask students in groups to research and study the properties of all of the large, round objects in the Solar System.  Then, I ask them as a group to answer the question, "How can we organize the large, round objects in the Solar System by their properties?".  Planetary scientist and writer Emily Lakdawalla maintains an excellent image of all of the round objects in the Solar System less than 10,000 km in diameter, which can be used as a resource for students pursuing this investigation.  If you study the properties, you do find that the terrestrial planets (Mercury, Venus, Earth, and Mars) have very similar properties and the Jovian planets (Jupiter, Saturn, Uranus, and Neptune) share properties.  However, the other objects in the Solar System can be grouped in various ways, and Pluto shares properties with many other objects, but not with the planets.  Often this leads to a discussion that the names we have traditionally used -- planet & moon -- are insufficient for categorizing these objects.  It really does seem like we need to either call many dozens of objects planets, or only 8.  There is no clean, scientific categorization of the large, round objects in the Solar System that leads to 9 planets with Pluto being the 9th.

Pluto has a larger albedo than most KBOs, making it appear brighter on Earth and easier to observe than most KBOs. However, in all other respects, Pluto is probably very similar to Eris, Quaoar, Ixion, and Varuna. So, while we now only recognize 8 planets, we have a number of new interesting objects to study in addition to Pluto. We continue to learn more about these objects. Eris is now known to have a small moon named Dysnomia, and Pluto was found to have two more moons, Nix and Hydra, in 2006, and two other new moons, Styx and Kerberos, in 2011 and 2012. These were also imaged by New Horizons, but in far less detail than Pluto and Charon. 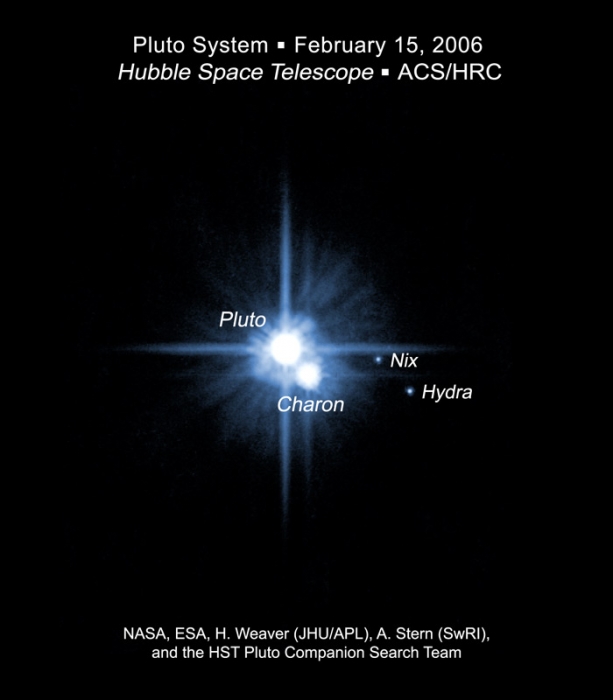 The story of the status of Pluto is likely to change, and I expect astronomers to continue to identify large KBOs. The story to date has been exciting, and I recommend investigating it much more deeply than we have here.

‹ Rings and Jovian Moons up Comets ›
ASTRO 801: Planets, Stars, Galaxies, and the Universe