Among the objects that you may have seen in your lifetime or may expect to see in your lifetime besides the Sun, Moon, stars, and planets, are a class of objects called comets. Comets appear to us very differently than all of the other objects that we have seen. Instead of points of light or disks of light, these objects appear to have a long, narrow tail of diffuse light extending from a bright nucleus. One of the best recent examples of a naked eye comet was Comet Hale-Bopp.

Observations of comets have shown that the object itself is usually a quite small, irregularly shaped body. It is mostly made up of some rock and some different kinds of ices (water ice, dry ice or carbon dioxide ice, methane ice, etc.); so, many astronomers refer to comet nuclei as "dirty snowballs." Like Pluto, a comet nucleus was just imaged in much higher resolution by a recent robotic mission called "Rosetta". This image of Comet 67P Churyumov-Gerasimenko shows in great detail what one of these dirty snowballs looks like underneath the bright obscuring light. As comets approach the Sun, however, they undergo significant changes. As a comet absorbs heat from the Sun, the ice and rock particles that make up the nucleus heat up, and they form a large atmosphere around the nucleus, which is called the coma. As the comet moves through space, some of the solid particles in the coma trail off behind, forming a long, curved dust tail. The charged particles in the gaseous coma get pushed away by the Solar wind along the magnetic field lines that point outward away from the Sun, and they form a separate "ion tail," or gas tail. In many pictures of comets, you can see both tails—the straight, sometimes bluish colored ion tail and the curved, white dust tail, which is seen in the following APOD image.

The nucleus of a comet is usually only a few kilometers in size, the coma can be hundreds of thousands of kilometers in size, and the tails can be about an AU (150 million kilometers!) in size. Although these objects are both large in extent and can be very bright, they are actually very fragile because they do not contain much mass (the tails of a comet are spread very thinly over a very large region of space). The tails of a comet are so thin that the Earth can pass through them with no problem whatsoever, and, as I will point out shortly, this does happen with some regularity. The nucleus of a comet is very loosely bound together, so they can break into many pieces, which may destroy the comet completely, or the comet may wind up actually colliding with the Sun, which is another method by which comets die. The most famous example of this phenomenon is Comet Shoemaker-Levy 9, which impacted Jupiter after fragmenting into a number of pieces. During July of 2009, an amateur astronomer observed what appeared to be an impact spot on Jupiter very similar to the ones left behind by Shoemaker-Levy 9, and it has now been confirmed that Jupiter just suffered another, similar impact. APOD has an image of the impact scar and the story.

The orbits of comets determine their fate, and they also tell us about their origin. The orbits of comets are very different from the orbits of the planets. Planetary orbits are close to circular, while cometary orbits are usually much more elongated ellipses. A comet's nucleus is only a small, dirty snowball, and when it is far from the Sun along its orbit, it will not have a coma or tail. However, if its orbit takes it close to the Sun, then the process of creating a coma and tail will begin. If the comet is big enough or comes close enough to the Earth, we can see it in reflected sunlight without the use of a telescope. The Windows to the Universe website presents an excellent simple animation of the typical orbit of a comet. Starry Night can show you the orbit of any known comet, so you can use it to follow Comet Halley, Hale-Bopp, 67P, or any of the many other well-known comets.

We can only see comets when they have visible tails and comas when they are near the Sun. However, we can trace their orbits into the outer Solar System to determine their place of origin. We have found that some comets appear to originate in the Kuiper Belt, the same region inhabited by Pluto and the KBOs. However, it appears that the majority of the comets that we observe come from a more distant region of the Outer Solar System that may stretch almost as far as 50,000 AU, most of the way to the nearest star. Unlike the Kuiper Belt, which we think is a donut-shaped region aligned with the planes of the planets' orbits, this outer region that is made up of comet nuclei is likely to be a spherical region that completely surrounds the Solar System. The reason that we expect this region to be spherical is because the comets that we think come from this region enter the inner Solar System on orbits that are not always aligned with the planets' orbits, unlike those comets that come from the Kuiper Belt. This outer region of the Solar System is usually referred to as the Oort Cloud because it was proposed by the Dutch astronomer Jan Oort. There are likely to be a very large number (perhaps trillions) of comets that live in the Oort Cloud, and only rarely will one of them be pushed out of the Oort Cloud into an orbit that will bring it close enough to the Sun to be visible.

Recently, astronomers searching for objects in the Kuiper Belt found a 1000 km sized object that appears to be on an orbit that takes it out past the boundaries of the Kuiper Belt and into what may be the inner portion of the Oort Cloud! This object, called Sedna, is the first larger-than- comet-sized object known that may be part of the Oort Cloud, lending some observational evidence to the existence of this region. Although the majority of objects in the Oort Cloud are expected to be small comet nucleus-sized bodies, the discovery of Sedna does suggest that perhaps there are other large bodies in the Oort Cloud.

Cal Tech has a nice website full of information about Sedna written by the team who discovered it.

Although comets are fragile objects and their tails are so thin as to be almost insignificant, the collision of Shoemaker-Levy 9 with the planet Jupiter has shown us that we should be wary about the possibility of a comet's nucleus colliding with the Earth. Telescopes around the world watched as each chunk of the comet's nucleus impacted Jupiter, releasing immense amounts of energy. 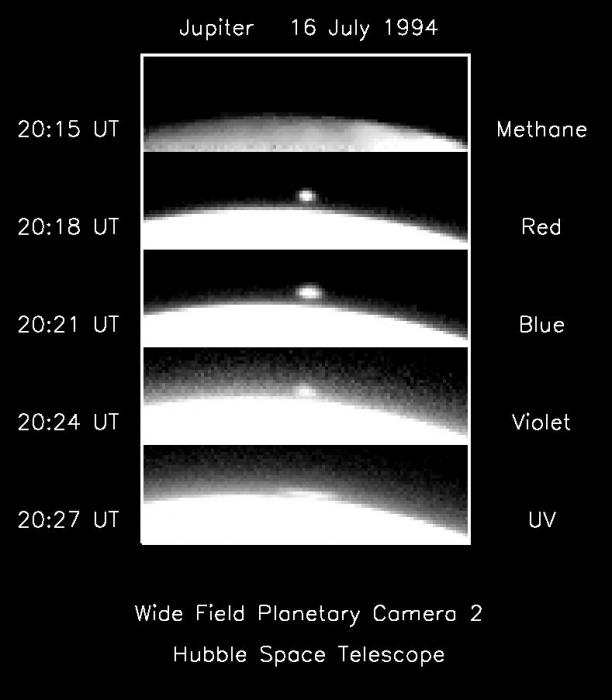 Impact sites in Jupiter's atmosphere were visible long after the impacts, as shown in the Hubble image below. Along with friends, I was able to see these dark spots through an amateur telescope with an aperture of 14 inches. 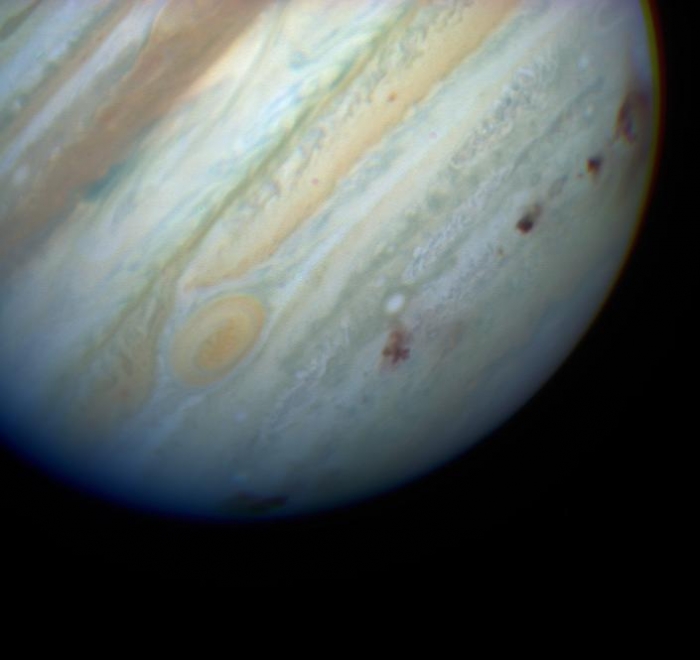 This next image, showing a crater chain on Ganymede, suggests that impacts like the Shoemaker-Levy 9 collision with Jupiter have happened before.

One important point to take away from the Shoemaker-Levy 9 impact on Jupiter is that the giant planets in the outer Solar System have a significant gravitational effect on comets. They can capture comets, redirect them, and even, as in the case of Shoemaker-Levy 9, destroy them. Jupiter has the largest influence on comets, and it appears that it is responsible for directing the orbits of comets into the inner Solar System where we can observe them. However, the other giant planets also affect comets. For example, observations by Cassini of one of Saturn's moons, Phoebe, suggests that it may be a comet from the Kuiper Belt that was captured by Saturn.