The Search for Planets around Other Stars

Another major area of emphasis in the study of astrobiology, aside from the search for life in our Solar System, is the search for planets around other stars. Prior to 1991, all searches for planets around other stars had been fruitless. However, in 1991, Penn State astronomer Alex Wolszczan first detected evidence for planets around a pulsar, which was surprising not only because of the discovery itself, but also because the planets, in this case, are associated not with a normal star but with a remnant of a supernova explosion.  Although many astronomers consider these to be the first planets discovered outside of the Solar System, there was evidence for a planet discovered in the late 1980s, but it was not confirmed until significantly later.

After the pulsar planet discovery, there were no other planets discovered until 1995, when a normal star called 51 Pegasi was discovered to have a planet orbiting it, too. Now, using the technique used to discover the planet around 51 Peg and a few other techniques, astronomers have discovered more than 2,000 planets (although you will see this number vary, depending on which source you use). You can find the current number of known planets around other stars, a table of the data on these planets, and an interactive tool for plotting the properties of these planets at the Extrasolar Planet Encyclopedia. You can also compare the data at that site to the data at Exoplanets.org. The latter database is maintained by a different group of astronomers, including a Penn State faculty member. The search for extrasolar planets is another area where NASA is currently investing a great deal of effort. Much of their work is summarized at the NASA PlanetQuest website.

While hundreds of planets are known to exist around other stars in our Milky Way, the large majority of these have been detected indirectly. That is, we do not simply take an image of a star and search near the star for planets. The reasons for this are:

Given the difficulty of directly imaging planets around other stars, astronomers have developed several indirect means for finding these objects. You can:

While the number of planets discovered using these techniques is large and is growing rapidly, no Earth-like planets have yet been discovered around a normal star (that is, not a pulsar). In fact, many of the planets that have been discovered are significantly more massive than Jupiter.

If you recall our discussion of brown dwarfs in Lesson 5, these failed stars are very low mass compared to the Sun. On the other hand, we are also finding planets that are very massive, much more massive than Jupiter. While the course author was discussing this with his colleagues, I realized that there is an interesting question that we have not yet answered now that we have so much data on massive planets. The question is, what is the difference between a low mass brown dwarf and a high mass planet? He created a video to discuss this in some more detail, and you can watch it on YouTube.

While direct imaging of a planet remains a significant technological challenge, many astronomers are working on this problem, and there have been some recent successes. There have been a few reports of planetary mass companions to stars being imaged directly, like the one shown below. 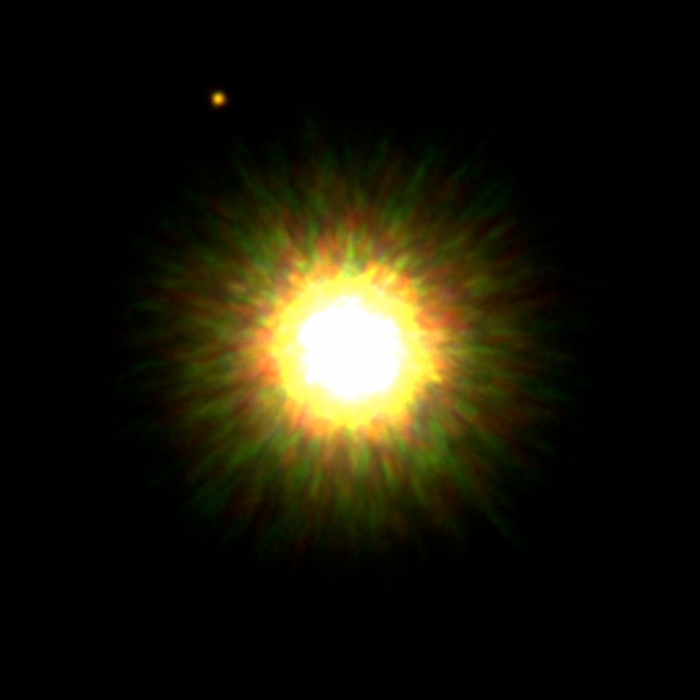 As our technology improves and we are able to discern more detail about objects like the one seen in the image above, how can we determine if there is life on these planets? The option that is available to us now is to use spectroscopy to study the planetary companions to determine the composition of their atmospheres if they have any. Recall the difference between the atmospheres of Earth, Mars, and Jupiter. Earth has an atmosphere rich in oxygen and water vapor. If we determine an extrasolar planet has these atmospheric constituents, that would suggest the planet has an atmosphere conducive to life, although that would not necessarily indicate that planet must be supporting life.

‹ Life in the Solar System up The Habitable Zone ›
ASTRO 801: Planets, Stars, Galaxies, and the Universe