The Search for Extraterrestrial Intelligence (SETI)

If intelligent, communicating civilizations exist in the Milky Way, how can we learn that they are there? While there are many reports of UFOs in the popular media, to date there has been no credible evidence that any alien civilization has ever visited the Earth. Since the distances to the nearest stars are a few light years or more, and since our current technology only allows us to build ships that achieve velocities that still require years to reach Pluto, the stars are unreachable to us. Even assuming that other civilizations might be capable of building ships that can fly much faster, a round trip to a star 20 light years away is at the very least 40 years, and likely much longer than that. Since physical travel between Earth and any nearby stars is improbable because of the lengths of time involved, if we are to find other civilizations in the Milky Way, we expect it will be by communication using light (that is, radio waves or optical light) rather than direct visits.

Light travels faster than any other means of communication, so a sufficiently advanced civilization may try to directly communicate with other civilizations using light. Beyond direct, purposeful communication, though, our planet is actually broadcasting signals out into space every day in the form of our radio and TV broadcasts. That is, when we broadcast radio signals around the world for you to listen to in your car, those same signals also travel through space, and so any civilization with a sophisticated enough detector can receive, say, the "I Love Lucy" show from decades ago. By the same logic, if we try, we should be able to detect signals sent directly to us from a distant civilization, or if they also use transmitters to transmit radio or TV type signals, we could detect those signals, too. However, the signal from a radio transmitter dilutes as it moves farther and farther from Earth, so the radio telescopes a distant civilization must have to detect TV or radio signals from Earth would have to dwarf our most powerful radio telescopes on Earth.

If you return to the lesson on the electromagnetic spectrum and review, there are a few considerations that we or another civilization might want to take into account when deciding how to communicate from planet to planet:

Since we cannot know ahead of time anything about other civilizations that may be listening for signals from us or who are trying to communicate with us, the best that we can do is take educated guesses at how we might communicate. Scientists who have been pursuing Search for Extraterrestrial Intelligence or SETI research have been, since the 1960s, using radio telescopes to search for signals from other civilizations. These searches have concentrated on a region in the radio part of the spectrum known as the water hole. In a part of the radio spectrum where the emission from the Galaxy and Earth's atmosphere is at a minimum, there is a wavelength associated with emission from Hydrogen (H) and another with emission from hydroxyl (OH). Since H+OH produces water, this part of the spectrum is referred to as the water hole. The assumption is that since this is a part of the spectrum that many astronomers already study and because the background is very low, it is a logical place for a distant civilization to try to communicate with us. Many of the SETI experiments that have been conducted over the years have tuned their radio telescopes to this part of the spectrum.

The next logical question is, if astronomers have been searching the water hole for a signal from another civilization, has one ever been received? The answer is maybe! In one of the earliest SETI experiments, the "Big Ear" radio telescope detected a signal that is now known as the "Wow!" Signal. The Wow Signal has the appearance of a real SETI signal, but it was never able to be independently verified: 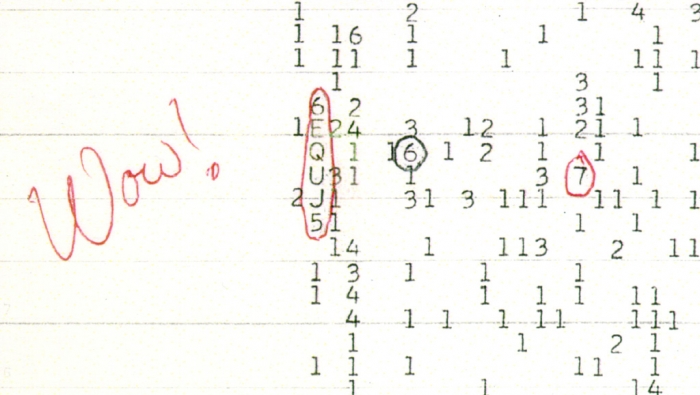 The translation of the numbers on the chart is that each represents the intensity of the signal above the background. The group that reads "6EQUJ5" corresponds to a strong signal that peaks at 30 times the intensity of the background. This is precisely the type of signal that SETI researchers expect to come from an alien civilization broadcasting a radio signal to Earth. Researchers did rule out that this was a terrestrial signal, and no known source of interference was ever discovered that can account for the strength of this signal. To be absolutely certain that this is a true SETI contact, though, researchers want verification by observing a repeat of the signal coming from the same part of the sky. Although a number of searches for a repeat signal were undertaken, none was ever successful.

There have been many different radio SETI searches using the Arecibo radio telescope, the National Radio Astronomy 140 foot radio telescope, the Big Ear telescope, and others. However, researchers have also proposed that optical light may be another option for communication. One thing that SETI researchers take into account is how likely it is that an intelligent civilization would be able to generate a powerful signal and would use their resources to do so—after all, would you be willing to put your tax dollars into a device to beam a signal to a planet in case there is life there? If it's cheap or free, you might be persuaded, but if it is expensive, fewer people are likely to see the benefits of such an experiment. So, part of the argument presented by SETI researchers is that, while you can assume that an advanced civilization may be better at generating high power light beams (optical or radio) than we are, they will still want to send signals out to other planets using as few resources (that is, energy) as possible. So, another possibility besides beaming radio signals in the water hole region of the spectrum is that they could shine a pulse of laser light in our direction. These pulses can be very bright, but if they are sent in short bursts, they don't use much energy. So "optical SETI" searches are being undertaken to look for short bursts of light from nearby stars.

The SETI Institute maintains a repository of resources related to the search for extraterrestrial intelligence. In particular, they have an excellent history of past SETI projects. Both the SETI Institute and I recommend watching the movie "Contact", based on Carl Sagan's book. Contact gives a fairly accurate depiction of SETI research.

More recently, astronomers, including several at Penn State, have been conducting other searches using different techniques that may reveal intelligent civilizations. One idea concerns "Dyson spheres", that is giant, artificial structures that a civilization might build around a star in order to capture most of that star's energy to power their civilization. These types of artificial structures should give off waste heat, and therefore, they might be detectable in the infrared. A highly detailed overview of a search for this type of waste heat is posted as a blog by Penn State Professor Jason Wright. Prof. Wright has also been involved with the study of a very odd star discovered in Kepler Data that is known as "Tabby's Star". In this case, it has been suggested that the highly unusual lightcurve for this star may be explained not by a planet transiting in front of the star, but an artificial alien "megastructure" that may be similar to a Dyson sphere transiting in front of the star. There is an excellent article in the Atlantic that will give you an overview of our current state of understanding of this star system, and Prof. Wright gave a public lecture on the discovery. It will be very interesting to see what eventual explanation we uncover for this unusual star.

‹ The Drake Equation up Astronomical Hazards to Life ›
ASTRO 801: Planets, Stars, Galaxies, and the Universe