Stars are not perfect blackbodies. However, the spectrum of a star is close enough to the standard blackbody spectrum that we can use Wien's Law

to get an estimate of its surface temperature. That is, if you observe the spectrum of a star and can determine the wavelength where the emission peaks , you can calculate that star’s temperature. Here is another copy of the plot that we studied in Lesson 3:

Figure 4.1: Two-dimensional plot of the spectrum of a blackbody with different temperatures. Reminder: the color of the curve on the plot is not intended to be indicative of the color of the object emitting that light.
Credit: Wikipedia

Measuring a star’s spectrum is not always easy, but astronomers can often measure a star’s color reasonably easily. To do this, they put a blue filter (B) on the telescope and observe the star. They then re-observe the same star with a visual (V), or yellow, filter. The B filter measures the star’s brightness in blue light, and the V filter measures the star’s brightness in yellow light. The difference between these two, B-V, is the star’s color. The animation below shows a plot of Frequency vs. Intensity, There is a yellow band showing the frequency range that corresponds to the V filter, and a blue band that illustrates the frequency range for the B filter. When you click the play button, you see an animated curve representing blackbodies of different temperatures, and it marks the B and V measurements through these two filters for the different blackbodies. Note how for the three different objects with three different temperatures, that for the coolest object: its B intensity is smaller than its V intensity, for the warmer object: they are roughly the same, and for the hottest object: its B intensity is larger than its V intensity.

In this animation, frequency of light is plotted on the x-axis (which, you should recall is related to wavelength and color of the light) while intensity of the light is plotted on the y-axis. When you click play, it shows the blackbody curve for a 3,000K object. Note the relative intensity of blue light (in the B band) is less than the visual, or yellow-green light (in the V band) for this object. It then shows a curve for a 10,000K object and how the relative intensities change for this hotter object to become nearly equal. Lastly, it shows the curve for a 30,000K blackbody which emits significantly more B-band light than V-band.
Credit: PhET and the Penn State Astronomy & Astrophysics

In addition, look at this image: Hubble Space Telescope image of star cluster 47 Tucanae. Astronomers took images through different colored filters (in this case, near-infrared, I, visual, V, and ultraviolet, U), and added the three images together to produce a close approximation of the colors we would see of these stars with our own eyes. You can tell that many of the stars are similar in color; however some stand out as being much redder than the others. These red stars have the coolest temperatures among the stars in the cluster.

Another good example is this color image of Albireo taken by students at the University of California, Berkeley. They adopted the double star system Albireo as the “Cal Star,” because the two stars (one blue and one yellow) match the school’s colors. Once again, we know from the colors of these stars that the blue star is hotter than the yellow star, because its apparent color indicates that the peak of its emission is in the blue, while the other star’s peak is in the yellow part of the spectrum.

At Hubblesite, they have an extended tutorial on the "Meaning of Color in Hubble Images." which includes a discussion of the filters used by astronomers to determine the color of astronomical objects.

Recall from Lesson 3 that the spectrum of a star is not a true blackbody spectrum because of the presence of absorption lines. The absorption lines visible in the spectra of different stars are different, and we can classify stars into different groups based on the appearance of their spectral lines. In the early 1900s, an astronomer named Annie Jump Cannon took photographic spectra of hundreds of thousands of stars and began to classify them based on their spectral lines. Originally, she started out using the letters of the alphabet to designate different classes of stars (A, B, C…). However, some classes were eventually merged with others, and not all letters were used. The original classification scheme used the strength of the lines of hydrogen to order the spectral types. That is, spectral type A had the strongest lines, B slightly weaker than A, C slightly weaker than B, and so on.

For more information on her life and work, visit the homepage for Annie Jump Cannon at Wellesley College.

Recall from Lesson 3 that the electrons in a gas are the cause of absorption lines—all the photons with the correct amount of energy to cause an electron to jump from one energy level to a higher energy level get absorbed as they pass through the gas. The absorption lines from hydrogen observed in the visible part of the spectrum are called the Balmer series, and they arise when the electron in a hydrogen atom jumps from level 2 to level 3, level 2 to level 4, level 2 to level 5, and so on. The strength of the Balmer lines (that is, how much absorption they cause) depends on the temperature of the cloud. If the cloud is too hot, the electrons in hydrogen have absorbed so much energy that they can break free from the atom. This is called “ionization,” and ionized hydrogen cannot create absorption lines because it no longer has an electron left to absorb any photons. So, very hot stars will have weak Balmer series hydrogen lines because most of their hydrogen has been ionized. Recall also that it takes energy to raise an electron from a lower level to a higher level. So, if the cloud of gas is too cool, the electrons will all be in the lowest energy level (the ground state, level 1). Since the Balmer series lines require electrons to already be in level 2, if there are no hydrogen electrons in level 2 in the gas, there will not be any Balmer series hydrogen lines created by that gas. So, very cool stars will have weak Balmer series hydrogen lines, too. Thus, the stars with the strongest hydrogen lines must be in the middle of the temperature sequence, since their atmospheres are hot enough that hydrogen will have its electrons in level 2, but not so hot that hydrogen becomes ionized.

This theory for the absorption by hydrogen was not understood until after much of the work on stellar classification had been completed. So, after the origin of the strengths of the lines was understood to have some dependence on temperature, the spectral classes for stars were reordered with the hottest stars at the beginning of the sequence and the coolest stars at the end of the sequence. The current order of spectral types is:

For decades, astronomy students have been taught a mnemonic to remember this order: O Be A Fine Girl (or Guy), Kiss Me! 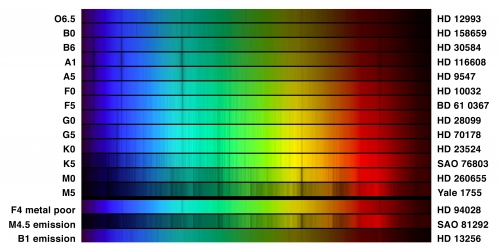 In the figure above, spectra of thirteen stars with normal spectral types and three special spectral types observed by the Kitt Peak / WIYN 0.9 meter telescope are presented. You can see two prominent trends in the spectral lines visible in the stars:

One summary comment about this discussion is that stars can be roughly classified by their colors, since the spectral types are arranged by temperature. Also, the apparent color of a star gives you a measurement of its temperature, but more accurate classification usually requires a high quality spectrum.

‹ Overview up The Distances to Nearby Stars ›
ASTRO 801: Planets, Stars, Galaxies, and the Universe