The Final Stages of the Evolution of a Sun-like Star

After the red giant phase, low mass stars follow a different evolutionary path than more massive stars. For this reason, we are going to first consider what happens to low mass (less than 8 times the mass of the Sun) stars as they progress past the red giant phase. To really study and understand stellar evolution in detail, you would want to subdivide stars more finely. That is, you would want to separately consider the evolution of stars of 0.1, 0.5, 1.0, 1.5, 2.0, 3.0, 5.0, and 8.0 solar masses, for example, and you would find differences between each. We are going to continue using a solar mass star as our example for low mass stellar evolution, but you should realize that the details of the evolution of stars of 0.5 solar masses or 5.0 solar masses deviate from the general description presented below.

During the red giant phase of a star's lifetime, the core is not in equilibrium. All of the fusion is occurring in a shell outside of the helium core, so there is no energy generation or outward radiation pressure to support the helium core. For this reason, the core of the star continues to collapse during the red giant phase. Collapse means an increase in temperature and density in the core. In many low mass stars (from about 0.5 - 3.0 solar masses), the core can be compressed to the point that it becomes a degenerate gas. This has important consequences in stellar evolution, so I will briefly describe what this means.

The gas inside stars is a soup of atomic nuclei and free electrons. If you compress a gas of this type to a high enough density, you have to use two of the laws of quantum mechanics to describe its behavior. These say:

The net effect of these two quantum mechanical effects is that when the gas has been compressed to the point where many of the lower energy levels have been filled, it begins to resist compression. Even though the physical state is still that of a gas, it is harder to compress a degenerate gas than solid steel!

At some point after the core has become degenerate, the core temperature reaches approximately 100 million kelvin, creating the proper conditions for three helium nuclei to fuse together to form one carbon nucleus (these carbon nuclei can also fuse with an additional helium nucleus to form one oxygen nucleus). This is referred to as the triple-alpha process, and it is an alternative fusion process to the proton-proton chain you learned about previously. In stars with degenerate cores, when this triple-alpha process begins, the entire core ignites at once in what is known as the helium flash. The star is now in the core helium fusion phase of its lifecycle. Contrary to what your intuition might tell you, in this phase, the outer layers of the star actually get smaller and hotter (the helium flash occurs in the core of the star in a very short time period and is not able to be observed directly). As you can see in the HR diagram below (Fig. 6.4), the evolutionary track of a Sun-like star now moves the star back towards the Main Sequence. This region of the HR diagram is called the horizontal branch, because stars in this phase of their evolution populate a narrow, almost horizontal box that extends to hotter temperatures from the red giant region of the diagram. 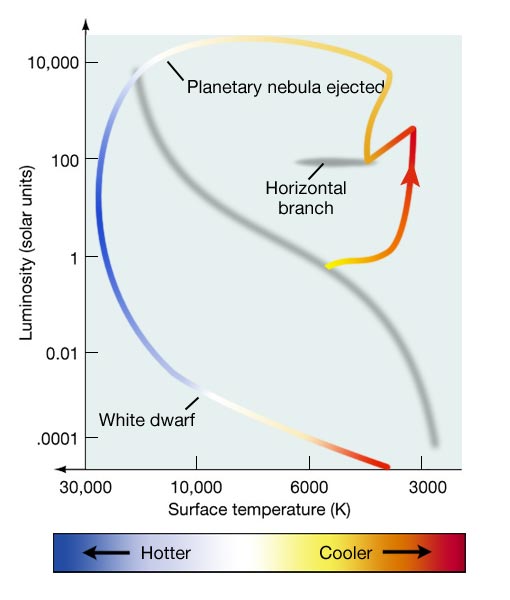 The horizontal branch phase of a star's life is much shorter than the Main Sequence phase of its lifetime. The star will convert all of its core helium into carbon and oxygen, and then fusion will end once again. The core will again begin to collapse inward with no radiation pressure to support it. Because there is still so much helium and hydrogen outside of the core of the star, after core helium fusion ends, the increased temperature can once again ignite shell helium fusion just outside of the carbon/oxygen core, and shell hydrogen fusion can continue outside of the helium shell. During this second phase of shell fusion, the outer layers of the star will expand again, but this time by an even larger amount. In this phase, the star can be called an asymptotic giant branch star, or sometimes a red supergiant star. For example, the star Antares is an M type supergiant. It has a luminosity 13,000 times that of the Sun.

For low mass stars, this is the final stage of their lifetime in which they generate energy via fusion. Once the helium and hydrogen shell fusion uses up all of the available fuel, the star's life is effectively over. However, the star will still leave behind two visible remnants. In the following table (6.1) we summarize some of the properties of a typical Sun-like star during its energy-generating lifetime:

There is one last property of stars to consider, because it plays a more significant role as stars age; this is the stellar wind.

In this movie, we see an artist's impression of the solar wind, which is the stream of high energy particles being emitted by the Sun's corona. During the Main Sequence lifetime of Sun-like stars, this wind is not very strong—that is, the total amount of mass being lost by the Sun is small. However, during the later phases of a star's evolution, the mass loss rate associated with the stellar wind can increase significantly. By the time of the helium flash, a Sun-like star of initial mass 1.0 MSun may have only 0.7 MSun remaining. By the time the star has completed its nuclear fusion, there will be a significant amount of expelled gas from its envelope in its immediate vicinity.

In this short animation, we see the Sun on the left with rays emanating from it into space. The rays seen in the animation are supposed to represent the stream of charged particles leaving the Sun that astronomers call the solar wind. Every star should have a wind like this, although the intensity can vary dramatically from star to star.
Credit: Video from NASA CDROM “The Dynamic Sun” v5.0.
‹ The Transition to the Red Giant Phase for Sun-like stars up Planetary Nebulae and White Dwarfs ›
ASTRO 801: Planets, Stars, Galaxies, and the Universe