When a star reaches the asymptotic giant branch (its second ascent up the red giant branch), the outer layers of the star are, in general, several AU away from the core. If you recall from our study of the force of gravity, the magnitude of the inward pull drops off like the distance squared. Thus, the outer layers are no longer bound very strongly by gravity to the core. Given our observations of planetary nebulae (described in more detail below), we can infer that at some point near the end of the lifetime of a low mass star, it sheds its outer layers entirely. What astronomers are still trying to determine, however, is exactly the mechanism or mechanisms that are responsible for causing the envelope to be expelled. There are multiple scientific models for the expulsion, including the one described at astronomynotes.com: we know that in the late stages of stellar evolution that dust grains (e.g., the "soot and sand" we talked about in dark nebulae) form in the atmospheres of very cool giant stars. The pressure exerted on these dust grains in the atmosphere by the photons emitted by the star may be enough to push the loosely bound envelope away from the star. So, at the end of the lifetime of a Sun-like star, there will be two remnants: its envelope and its core.

The remnant of the core: The White Dwarf

The core of the star is no longer undergoing nuclear fusion of any variety, so it is once again collapsing. When the core reaches a size approximately equal to that of the Earth (about 100 times smaller than its original size when it was fusing hydrogen), the collapse will stop. The core will eventually achieve a stable equilibrium when electron degeneracy pressure resists the collapse. During this new equilibrium state, though, no fusion is occurring, so the carbon/oxygen remnant of the stellar core will not generate any new energy. Instead, it will simply cool off slowly by radiating light, getting fainter and fainter until it no longer gives off enough light to be visible. This process can take billions or even trillions of years. While the object is still visible, it is called a white dwarf, and it occupies the lower left of the HR diagram because of its high temperature and faint luminosity. White dwarfs are much smaller than typical stars, and thus are one of the stellar remnants often referred to as compact objects. Subrahmanyan Chandrasekhar won the Nobel Prize in Physics in 1983 for his contributions to our understanding of stellar evolution, including the stability of white dwarf stars. Chandrasekhar showed that, theoretically, white dwarf stars are only able to remain in equilibrium resisting gravitational collapse if their mass is below 1.4 MSun. Above that mass, electron degeneracy pressure is no longer able to resist gravity. This upper limit of 1.4 MSun for the mass of a white dwarf is known as the Chandrasekhar Limit.

Check out the Chandra Observatory's page about their namesake, Subrahmanyan Chandrasekhar.

If you consider that the size of a white dwarf is about the size of the Earth and that it contains approximately the same amount of mass as the Sun, you should realize that the properties of the material that make up a white dwarf must be unusual. The density of a white dwarf is unlike anything on Earth. The density of a material is its mass divided by its volume, and this number gives you an estimate of how tightly packed the material is within the volume it occupies. The more tightly packed (the denser), the heavier the object will feel. For example, let's consider a sugar-cube-sized lump of lead and a sugar-cube-sized lump of cotton. The lead is much denser than the cotton, so if you hold both lumps in your hand, even though they are the same size, the lump of lead will feel heavier. White dwarf material is much denser than lead. A sugar-cube-sized lump of white dwarf will have a mass of about 2,000 kg, which weighs about 4,000 pounds in Earth's gravity. It is expected that the coolest white dwarfs actually crystallize, and since they are primarily made of carbon/oxygen, they are occasionally compared to enormous diamonds, as in this press release from the Center for Astrophysics.

Because they are no longer generating energy by fusion, white dwarfs can be thought of as the "embers" of dead Sun-like stars. In some textbooks, authors refer to the final state not as a white dwarf, but as a black dwarf, which is achieved when the white dwarf has cooled to the point where it is no longer radiating any light at all. However, the time it takes for a white dwarf to cool to become a black dwarf is longer than the age of the Universe, so there are no black dwarfs yet in existence. The coolest white dwarfs known have temperatures of less than 4,000 K, while the most massive, youngest white dwarfs have temperatures of approximately 100,000 K!

Below is an image from the Hubble Telescope that was part of a study to identify the faintest, coolest white dwarfs in a star cluster called M4. We can estimate the age of these white dwarfs based on simple models of how they cool. They are found to be around 12 - 13 billion years old, which is consistent with the age of the Universe as determined by other methods. 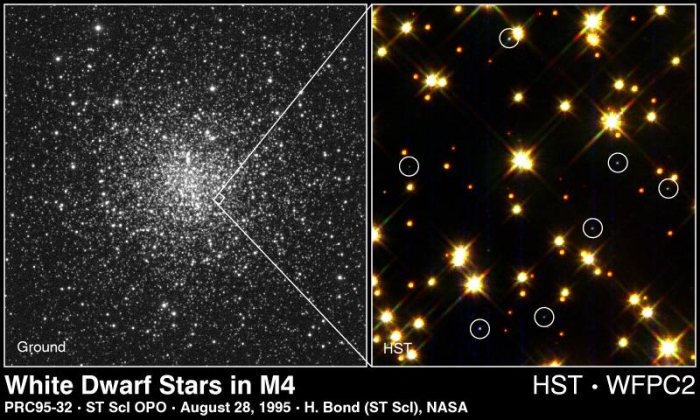 The remnant of the envelope: The Planetary Nebula

The white dwarf also plays a role in the fate of the ejected outer layers of the star. For a brief time, by the standards of stars (only about 50,000 years or so), the intense UV light emitted by the white dwarf is illuminating the material that used to be the outer layers of the star. This light ionizes the atoms in the gas. The electrons freed by the ionization process periodically recombine with the ions in the gas, emitting photons in the process and creating an emission line spectrum. So, the outer layers will glow brightly, creating an emission nebula that is referred to as a planetary nebula. This name is very misleading. The nebulae have nothing to do with planets. When the first few planetary nebulae were discovered by telescopes, they appeared disk-shaped and greenish (recall the green color comes from the bright lines of oxygen seen in these objects), similar to the planet Uranus. Astronomers called them planetary nebulae because of their observational similarity to Uranus, but we now know they are the remnants of dead stars and have nothing to do with planets.

In the image below of the Ring Nebula, note how the interior looks greenish. Also, note that the white dwarf remnant of the star's core is located in the center of the nebula. 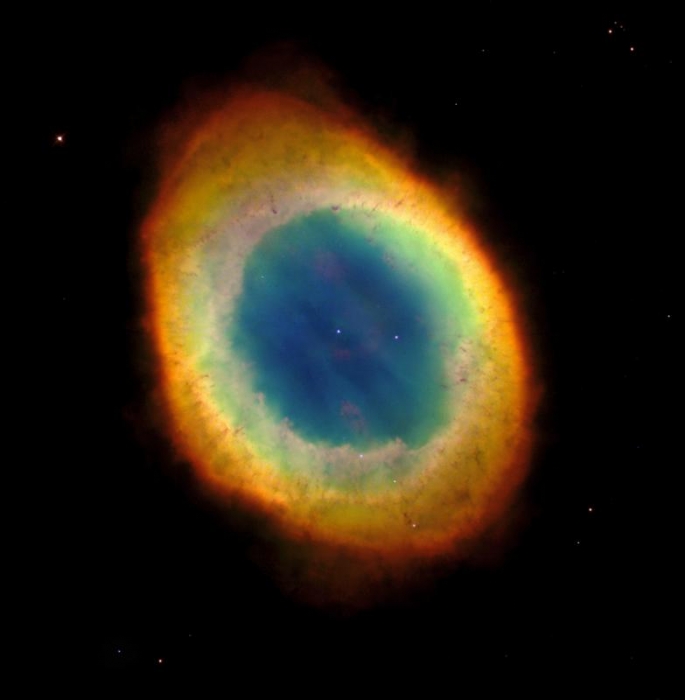 The duration of the planetary nebula stage for stars can be estimated quite simply in the following way:

My opinion, which is shared by other astronomers, is that planetary nebulae are some of the most beautiful objects photographed by telescopes. The Hubble Space Telescope has taken many images of different planetaries, and I encourage you to look at some of the samples I link to below. Planetary nebulae images appear in many places, including occasionally in pop culture. The group “Pearl Jam” even used a Hubble Space Telescope image of a planetary nebula as the cover of their CD Binaural.

Like many of the topics that we have covered in this lesson, astronomers have been able to determine some of the details related to the formation of planetary nebulae, but this is another area of active research. One model that is successfully able to describe some of the structures and properties observed in planetary nebulae is sometimes called the colliding wind model. The idea is that the star is surrounded by slow-moving gas produced when it had a strong stellar wind. When the envelope has mostly been removed from the star—exposing the core—a higher velocity outflow is created. This high-velocity gas plows into the low-velocity gas in the stellar neighborhood. This collision compresses the gas at the interface between the two winds, and it is that gas that glows and produces the rings of emission we see in many planetary nebulae. In planetaries that show elongated or hourglass structures, it is possible that a dense structure around the star's equator, caused by perhaps a stellar companion, may collimate the fast wind into oppositely directed jets of gas rather than into a spherically symmetric wind.

Briefly, let's mention the fate of the lowest mass stars here -- they will not become red giants nor emit planetary nebulae. Instead, we predict they will transition from red dwarf Main Sequence stars directly to white dwarfs. However, this is purely a theoretical prediction, because the expected Main Sequence lifetime of a star of < 0.4 MSun is approximately 10 trillion years. So, no star < 0.4 MSun that has formed in the Universe has yet been around long enough to die!

‹ The Final Stages of the Evolution of a Sun-like Star up The Evolution of Massive Stars and Type II Supernovae ›
ASTRO 801: Planets, Stars, Galaxies, and the Universe