The Appearance of the Milky Way in the Night Sky

When you observe the night sky with your eyes, you can see the Moon, perhaps several planets, and many stars. If you are in a particularly dark location and if the moonlight is not too bright, you may also see a faint band of light that stretches from horizon to horizon. This pale, white glow has been called the Milky Way for centuries. The word “Galaxy” actually means Milky Way. If you look galaxy up in the dictionary, you will find that the root of this word comes from the Greek and Latin words for milk.  I often like to ask students if they know the scientific name for the sugar in milk -- most have heard of lactose, but fewer have heard of galactose.  If someone comes up with galactose, though, I try to make the connection between that sugar and our name for the structure in space in which we live.

Try this in Starry Night!

Below is a real image of what you might see from a really dark sky site (in this case, Death Valley). For most of us, seeing the Milky Way as bright as it appears in Starry Night or in this image is a rarity, but this used to be a very common site.

There are many images of the Milky Way available on APOD. Some of my favorites all seem to be from Mauna Kea:

With just your eyes, it is difficult to tell that the Milky Way is anything besides a faint, patchy glow. However, with even the smallest telescope or binoculars you can resolve this glow into stars. Below is an image taken as part of the 2MASS infrared survey of the sky that reveals the density of stars in the center of the Milky Way. If you prefer, there is a much higher resolution version of this image available for closer inspection. 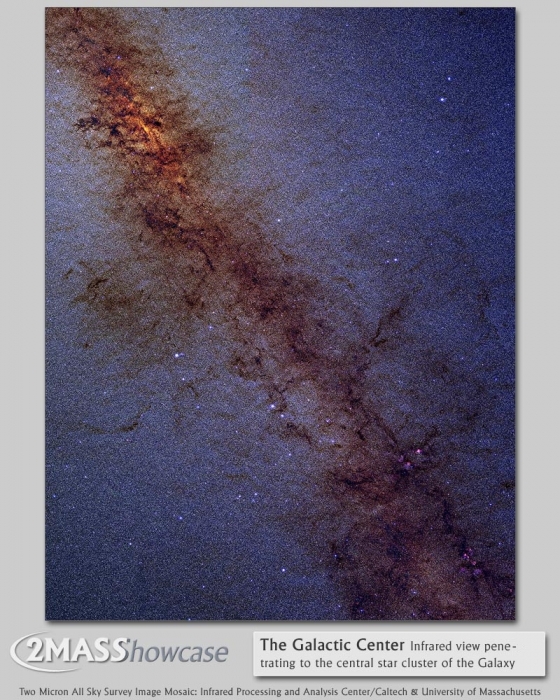 This image, and images you have seen previously during our study of the ISM, show you a representative section of the Milky Way, but they also show you why it appears patchy. There are large, dark clouds that obscure some of the stars. Thus, when you see the Milky Way with your unaided eye, you don't see a uniform glow, but a bright glow that is interrupted by dark patches.

The images above show just a sampling of the part of the Milky Way that is visible from a particular site by a typical camera. An interesting question to answer is: How would the Milky Way look if we could see the entire sky all at once? We can use the same techniques that mapmakers use to represent the entire Earth on a flat map to show you how the entire sky looks. For example, here is a projection of the globe of the Earth:

Figure 8.3: Projection of the globe of Earth
Source: Wikipedia

In this map of the Earth, you can see the entire globe and all of the continents and oceans represented inside of the elliptical boundary. Although this particular map projection is not used as much anymore for maps of the Earth, astronomers often use this same projection of the three-dimensional sky onto a two-dimensional picture when they want to represent the whole sky in a single picture. Below are several examples of these Aitoff projections of the whole sky.

There is a common feature in all of these images. The Milky Way is seen as a mostly flat, irregularly-shaped feature that stretches from side to side of every image. This tells us that if we could follow the Milky Way below our personal view of the horizon, it would be seen as a ring completely encircling the Earth. There are obviously some stars outside of this ring, but there are fewer of them (the caption for the map of half a billion stars points out that in some parts of the sky there are 150,000 stars per square degree, while in others there are only 500 stars per square degree). I also included two links to images of the whole sky using different wavelengths of light:  infrared and radio waves. The reason for this choice is because I wanted to demonstrate that the Milky Way looks different when observed in different kinds of light. We will study this in more depth in a later section of this lesson.

The Sun is a star. We see many hundreds of stars with our naked eyes, and with telescopes, we can see that the band of the Milky Way is made up of the combined light from many stars. Historically, astronomers have used several methods to understand how the Sun, the bright stars, and the Milky Way all fit together into a coherent picture of the layout of the universe. In the next section, we are going to study one of the early simple methods for doing this: counting stars.

‹ Overview up The Shape of the Milky Way from Starcounts ›
ASTRO 801: Planets, Stars, Galaxies, and the Universe