The Shape of the Milky Way from Starcounts

One of the most famous astronomers of the 18th Century was Sir William Herschel. His fame comes mostly from the discovery of the planet Uranus, but another very important work of his was his picture of the Milky Way derived from a technique that he called “star gauging.” Herschel observed the sky in more than 600 different locations and counted every star he could see to the apparent brightness limit of his telescope. He assumed that all stars had the same intrinsic luminosity so that he could estimate the distance to each star from the Earth (this work was done before the HR diagram was created and before we understood the true range of luminosities of stars). Using his data, he created a map of the whole sky that incorporated the number of stars he counted and their distances from the Earth. This is reproduced in the image below.

Note in the image above that Herschel has provided the location of the Sun—it is the darker star near the center of the image. The conclusion you can draw from Herschel's work is that the Sun is located at, or is near, the center of the Milky Way.

In the early 20th century, the astronomer Jacobus Kapteyn orchestrated an even more impressive experiment than Herschel's to map out the Milky Way. Relying on the help of astronomers from all over the world, Kapteyn acquired photographs of regions on the sky he called “Selected Areas,” and he studied, in detail, the apparent brightness of the stars on the photographs and supplemented this with studies of their velocities. He used all of this data to construct a higher precision map of the Milky Way than Herschel. Below is Kapteyn's map.

Figure 8.5: Kapteyn's Universe from his 1922 publication of his photographic star count survey.
Source: Kapteyn, J. C. (1922). First Attempt at a Theory of the Arrangement and Motion of the Sidereal System. Astrophysical Journal, 55, 302.

In the map above, you can see that Kapteyn represents the Milky Way as a flattened disk with a radius of approximately 8500 parsecs. The Sun is offset from the center a bit, but is closer to the center than the edge. So, both Herschel and Kapteyn agreed roughly about the characteristics of the Milky Way. They both found that the Sun lies close to the center of the distribution of Milky Way stars and that the system is a flattened structure several times longer than it is thick. Unfortunately, neither Herschel nor Kapteyn knew enough to account for one extremely important effect that skewed their results. Thus, even though both undertook impressive experiments to study the Milky Way, they were both wrong in their conclusions! Light gets blocked by dust even in regions that are not as obvious as the dark nebulae. Therefore, extinguishing of light by material between the stars is more important than either Herschel or Kapteyn were aware, and it is this effect that caused them both to get incorrect results for the size and shape of the Milky Way. 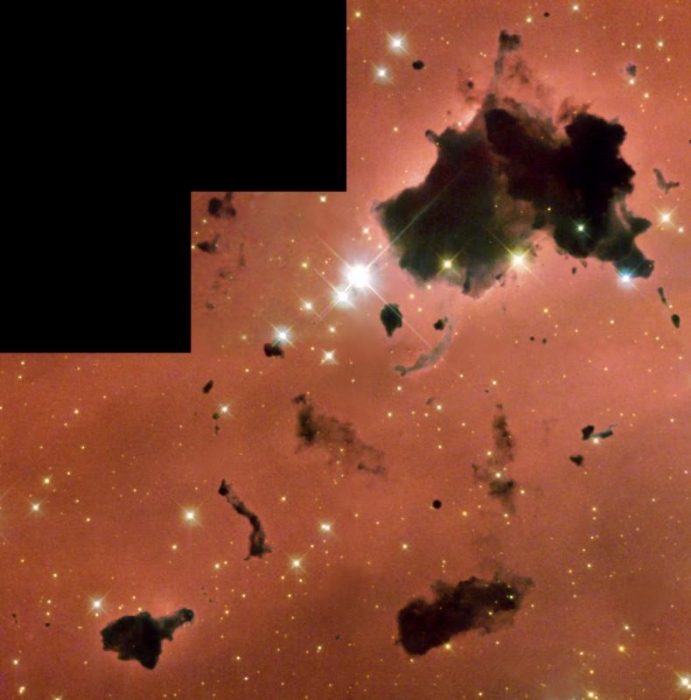 We have already discussed some of the material found between the stars, called the interstellar medium or ISM. There is an abundance of gas in the ISM, and we can directly observe this gas when it emits light, creating a nebula. There is also an abundance of dust in the ISM, which is observable because it affects the light reaching us from distant stars. This dust is made up of microscopic, solid particles. Recall from Lesson 5 (page 2) that when a photon of light encounters a particle of dust, it can be scattered, which causes the light from a distant source behind a cloud of dust to appear dimmer. Recall also that dust makes the light from distant sources appear more red than it was when it was emitted.

The combined effects of interstellar extinction and reddening by dust makes it impossible for us to observe stars that are located behind too much dust. Because of this, our view of the Milky Way is blocked in many directions. A popular analogy here is to picture yourself driving in a thick fog. You can only see the headlights of other cars when they get very close to you. Also, if the fog is pretty uniform, you will only be able to see to the same distance in each direction, for example, you might only be able to see all headlights within a 20' radius. Because of the dust in our galaxy, in optical light we can only see nearby stars well. This means that we are not able to see all the way to the edges of the distribution of stars in space. Because we can see roughly the same distance in each direction we look in the sky because of the dust, this gives the illusion that the Sun is in the center of the distribution of stars.

There are a few methods that we can use to get around this limitation of observing through dust, and those revealed a Milky Way much larger than Herschel or Kapteyn inferred.