The whole sky or large fractions of the whole sky have been surveyed with telescopes operating in different wavelength regions. The maps that have been created from these surveys show the Milky Way disk in detail. NASA Goddard Space Flight Center has collected these images and made a poster, shown here, and an interactive website for users to investigate the images. 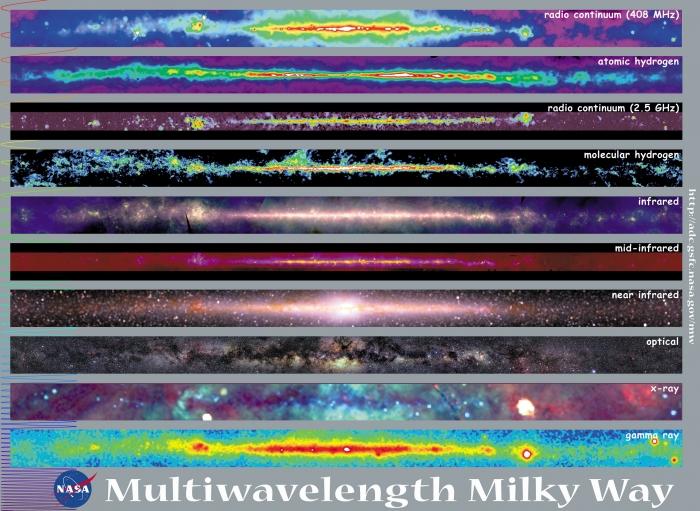 Figure 8.12: Poster image of the Milky Way in various wavelengths of light including four different radio maps, three different infrared maps, optical, x-ray, and gamma-ray, which illustrates how different features are more prominent in different flavors of light.
Credit: NASA Goddard Space Flight Center.
The Multiwavelength Milky Way website has extensive resources for teachers. You may want to investigate the maps in more depth, using the pan and zoom capabilities on the online images page. Among the resources are also pages on the structure of the Milky Way and how astronomers create all sky maps.

Depending on which version of Starry Night you are using, you may also be able to study the multiwavelength Milky Way within Starry Night. Under the Options Menu, Under the Stars... menu item, there may be an option to select "Milky Way." Choosing this option gives you a menu that lets you choose which wavelength to view the Milky Way and it should look just like the maps at the NASA Multiwavelength Milky Way website above. This feature is available in Starry Night Enthusiast 7, the version of the software recommended for this course.

There are three observations that the NASA set of images makes clear:

These images help synthesize some of the material we studied in previous lessons. For example, we know that the molecular clouds that form stars are dense, dark clouds that also contain dust. We also know that the dust is what obscures the optical light from reaching us, so we should expect that wherever there is a giant molecular cloud in the map that shows the molecular gas in the Galaxy, we should see that is where the obscuration in the optical image is the strongest. If you compare the two maps labeled “molecular hydrogen” and “optical,” you will see that the brightest parts of the molecular hydrogen map correspond almost exactly to the darkest locations in the optical map.

The near-infrared (which means wavelengths of light just larger than the red part of the optical spectrum, approximately 10,000 Angstroms) image of the sky also reinforces what we learned about the properties of dust. That is, dust scatters blue light very efficiently, but red light is not affected as strongly. This also applies to near-infrared photons; most of these pass through the dust without being scattered. In the disk of our galaxy, we expect to find that by number, K and M Main Sequence stars will be the most prevalent, and we also know that in all populations older than about a few hundred million years, red giant stars (also types K and M) will be very common. Since the spectrum of a K and M star will peak in the red or near-infrared part of the spectrum, the majority of stars in the disk of our galaxy should emit strongly in the near-infrared. Thus, the near infrared map should trace out very well the distribution of the K and M stars in the disk, and most of this light should be visible to us because it is not heavily extinguished by dust.

In most of the images of the sky, several point sources are visible, and some of these are labeled in the finder chart underneath the maps. Many of the point sources visible in x-rays and radio waves are either supernova remnants or pulsars. However, the point source at the very center of our Galaxy is a different type of object altogether, and is the first example of a type of object we have not yet discussed.

‹ The Modern Picture of the Milky Way up Sgr A* - The Supermassive Black Hole in the Milky Way ›
ASTRO 801: Planets, Stars, Galaxies, and the Universe