Coincident with his discovery of Cepheid stars in Andromeda, Edwin Hubble was working in the mid 1920s to study other galaxies in more detail (although, at that point, it was still common terminology to refer to them as nebulae). It is often the case with the discovery of a new class of objects that astronomers invent a classification scheme as a first step to try to understand these objects. Hubble is credited with creating a classification scheme for galaxies, which is usually referred to as his “Tuning Fork” diagram. 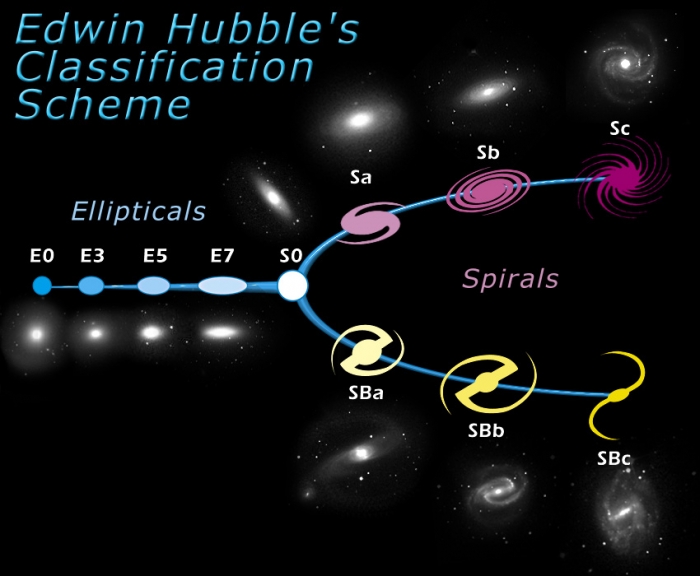 Figure 9.2: Diagram of Hubble's Tuning Fork classification scheme from Hubblesite.  This is a classical type of image still used by astronomers today to show how galaxies are classified.  On the left are four images of elliptical galaxies proceeding from nearly circular / spheroidal (E0 type) to very elongated elliptical / ellipsoidal (E7).  An image of an S0 galaxy is next, which is considered a transition object with some properties similar to spiral galaxies and others more like elliptical galaxies.  At this point in the diagram, the "tuning fork" shape forks -- with three images of spiral galaxies on the top and three images of barred spiral galaxies on the bottom.  As you progress along the top from Sa to Sb to Sc or along the bottom from SBa to SBb to SBc, the arms open wider and the central bulge becomes less prominent.
Credit: Space Telescope Science Institute

The Hubble Tuning Fork has been reproduced many times with many different sets of galaxy images. A particularly detailed version was produced by the Spitzer Infrared Nearby Galaxies Survey (SINGS) group. The group wrote a brief article describing their work for you to read. If you want to print this out as a full-size poster for your classroom, they have made available a 4200x3600 TIFF file that provides enough resolution to do so.

It becomes very apparent after observing just a few galaxies, like Hubble did, that there are a great variety of types. Some are featureless, while others have very distinct spiral arms. Below are links to a number of images of the various galaxy types. After you look at a number of different galaxies, we will discuss Hubble's classification scheme below.

Try this with Starry Night!

You should repeat some of what Hubble did when he developed his tuning fork classification system. You should investigate the images of several galaxies, and then compare and contrast their features. First, open Starry Night, and do the following (Note: The Digital Download core application does not have galaxy images. So, if you have that version, you will have to skip this part of the exercise):

Next, study some specific examples in detail to familiarize yourself with their differences:

Finally, if you want to look at images of galaxies of a specific type, below is a list of galaxies with their types in Hubble's classification scheme:

Edwin Hubble classified galaxies using the types that you see illustrated on the two tuning fork images; the one above and the SINGS image. His main types are:

Within each of these groups, there are also sub-classifications.

The appearance of the spiral arms also changes between the a, b, and c subclasses. In Sa galaxies, the arms are tightly wrapped around the bulge, while in Sc galaxies the arms are much looser, and often appear to be more clumpy than the smooth arms of an Sa galaxy. Sb galaxies have intermediate properties between those of Sa and Sc galaxies.

We can classify edge-on spiral galaxies based on the appearance of their bulge, even without being able to see the spiral arms. So for example, the edge-on spiral M104 - the Sombrero galaxy, seen below, can be classified as an Sa galaxy. 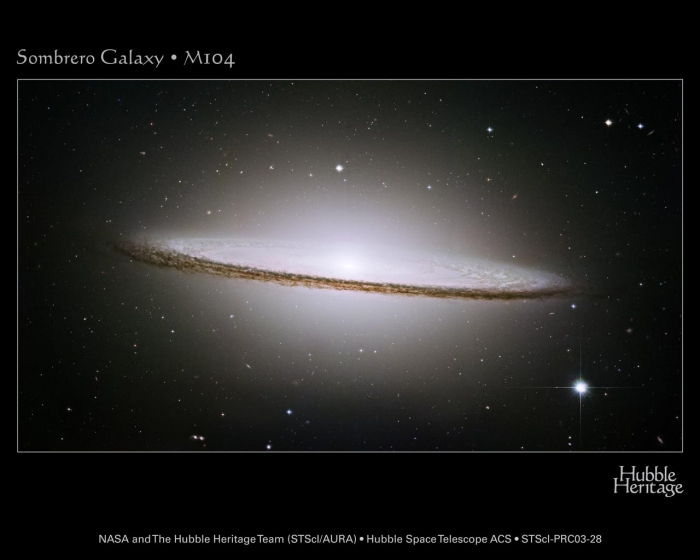 Here is another edge-on spiral galaxy, NGC 4565. Can you guess what type it would be assigned, Sa, Sb, or Sc? What is the most obvious difference between NGC 4565 and M104? 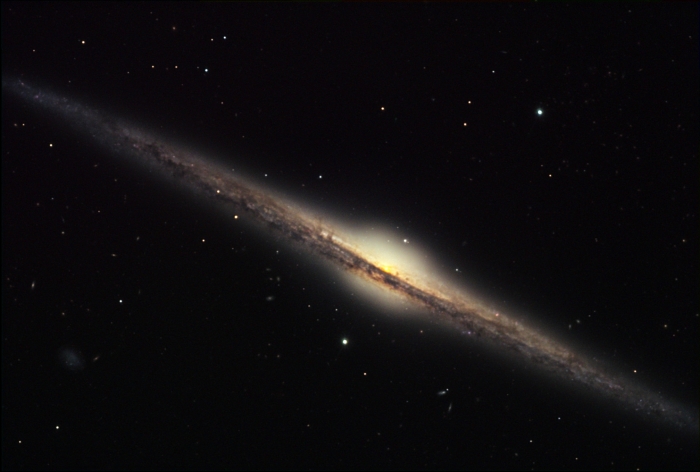 The subclasses of the elliptical class are assigned numbers based on how round they appear. The roundest ellipticals are referred to as E0 galaxies, and the most elliptical-shaped galaxies that we have observed are labeled E7 galaxies. The numerical designation is determined by the ratio of the major axis (a) to the minor axis (b) of the object. The ellipticity is defined as e = 1 - (b/a), so a circle will have an ellipticity of 0, and a highly elliptical galaxy with a minor axis 30% of the length of its major axis will have an ellipticity of e = 1 - (3 / 10) = 0.7. An E0 galaxy has an ellipticity of 0, and an E7 galaxy has an ellipticity of 0.7, so to determine the Hubble classification, you multiply the ellipticity by 10. Be aware that just like with spiral galaxies, our image of that object is a 2D projection of a 3D object, and so the classification only tells you how it appears from your point of view. If you consider a football as a decent analogy for an elliptical galaxy (see image below), if you look at it from the side view as in the picture, you can see its elliptical nature. However, if you look at it from the point of view of the tip of the football, it will appear to be circular. So, an elliptical galaxy that appears to us as an E0, might appear as an E7 to an observer living in a distant galaxy with a different point of view from ours. 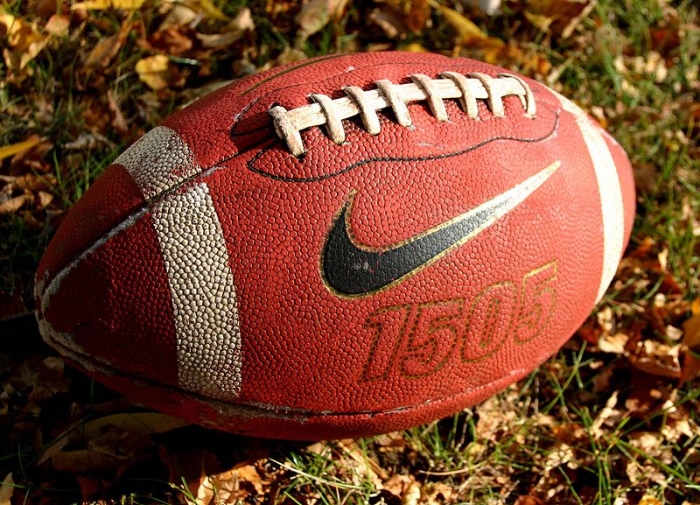 There are some galaxies that appear to be intermediate between ellipticals and spirals. They are disk galaxies with bulges, but they have very little or no gas and dust like other spirals. Their disks do not show evidence of spiral arms, either. These galaxies are usually called lenticular galaxies or S0 galaxies.

Finally, we have the "miscellaneous" category. Anything that is so unusual that it can't be fit into any of the normal categories is called an irregular galaxy. There are two subclasses in this group, too. Irregular I galaxies (like the Magellanic Clouds) appear to have some spiral structure, but it appears to have been disrupted. Irregular II galaxies are much more disturbed than Irr I galaxies and look like they have been victims of some type of violent event that has completely disrupted their original shape. Many irregular galaxies are found to contain many young stars and to be experiencing significant ongoing star formation.

At this point, it should be noted that classification of galaxies is not a very precise enterprise. In fact, if you do any follow up research on some of the galaxies above, you will find a variety of classifications given for the same object. For example, M81 can be found labeled Sa or Sb. Depending on the type of observations made (e.g., optical observations vs. infrared observations), a barred spiral may have a prominent bar in one image, and it may be almost unobservable in another. So, you may find the same galaxy classified as an Sb or an SBb depending on how it was observed.

There are many other properties of galaxies we can discuss in some detail, but to conclude our discussion of normal galaxies, we should briefly discuss the size of typical galaxies. Among spirals and barred spirals, there is a reasonable amount of uniformity. Some spiral galaxies, like M33, are measurably smaller than others, like M31, which is approximately four times larger. However, in general, the differences are small. Within the class of elliptical galaxies, however, there is a much larger range of sizes. Some galaxies are referred to as dwarf ellipticals because they share many of the properties of elliptical galaxies but are significantly smaller and less massive. NGC 205 is an example. If we take a census of the galaxies in the Universe, it appears that by number, dwarf ellipticals are the most common type of galaxy in the Universe.

‹ The Spiral Nebulae and the Great Debate up Exotic Galaxies ›
ASTRO 801: Planets, Stars, Galaxies, and the Universe