Albedo Modification within the Earth’s Atmosphere

One set of geoengineering strategies would, through various means, manipulate the climate (or stop or slow the pace of climate change, however you want to look at it) by reducing the amount of radiation that is trapped in the earth’s atmosphere. Less trapped radiation, less warming and the less energy that winds up embedded in the world’s oceans. The logic is pretty simple, but the strategies involved in this approach run the gamut from things that are practiced regularly today, all the way to the types of things that you might see in science fiction movies.

The first approach to reducing the amount of radiation trapped in the atmosphere goes by the catch-all name of “albedo modification.” The word albedo simply refers to the reflectivity of some surface. If you have ever seen bright sunshine after a large snowfall, you know that it can be nearly blinding. This is because freshly-fallen snow is a “high albedo” surface that reflects the sun’s light. The albedo is described as a percentage or a number between zero and one. Snow, for example, has an albedo of about 0.9, meaning that 90% of the radiation that hits a snow field is reflected back into the atmosphere. Oceans, on the other hand, have an albedo closer to 0.1, meaning that only 10% of the radiation that hits the oceans is reflected back into the atmosphere. 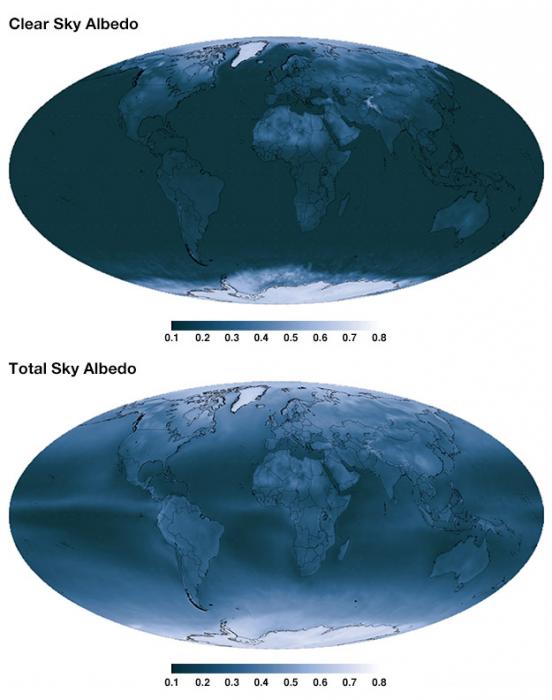 The top panel shows the “clear sky” albedo (without the influence of clouds) while the bottom panel shows the “true sky” albedo, which considers clouds, pollutants and other things in the air.
Source: Wikipedia: Ceres 2003 2004 CC BY-SA 3.0(Creative Commons)

To learn more about different strategies proposed to increase the overall albedo of the earth, please read the Foreign Affairs article by D. Victor, et. al. The reading selection is focused on albedo enhancement through the injection of various types of particles into the atmosphere. These particles would have a similar effect as putting a screen around your body during a sunny day. The screen would reduce – but not eliminate – the amount of sunlight that hit your body. The particles that might be launched into the atmosphere would effectively reflect some of the sun’s radiation away from the earth’s surface. If the radiation is reflected, then warming of the planet should be reduced. While this may sound far-fetched, we do have lots of evidence that it would work. Volcanic eruptions have basically the same effect as albedo modification schemes – the ash and sulfur particles that are spewed from the volcano do have the effect of reflecting radiation and causing some cooling, hence the term "volcanic winter".

An important point raised in the reading is that albedo modification by itself, without any accompanying reductions in emissions, might be able to address the “global warming” problem but would not be able to mitigate any non-warming damage done by increased emissions of CO2, particularly the acidification of the world’s oceans. Ocean acidification can, among other things, damage coral reefs, which hundreds of thousands of people rely upon for their livelihoods.

‹ The Geoengineering Taxonomy up Albedo Modification from Space ›