Perhaps the most common argument about the philosophy of global warming and fossil fuels comes from those who favor libertarian principles and the free market. Many individuals and groups argue that “solutions” to the climate-change problem will cause government growth, but “that government is best that governs least” (Thoreau, Civil Disobedience, 1849), and that the government should not be in the business of picking winners and losers.

Reading the 21-page document from US President Obama’s administration outlining policy responses to CO2 and climate change, as introduced in the previous module, may suggest how many regulations could be written to deal with this issue. And, more regulations generally bring more government.

Despite such a clear example, however, this argument really is more nuanced. A libertarian's desire for less government may actually recommend response now to fossil-fuel CO2. 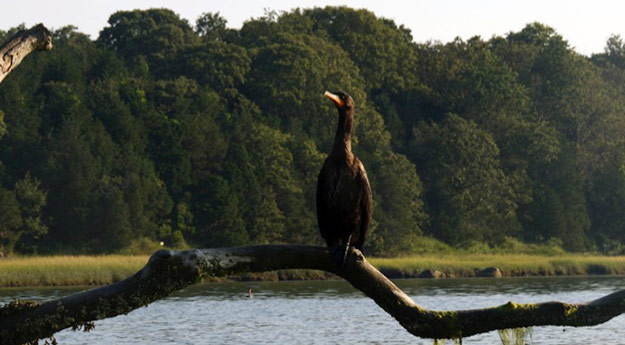 This cormorant in Nauset Marsh, Eastham, Cape Cod sits in front of a landscape that was tree-covered for millennia after the ice-age, clear-cut in the 1600s, and remained largely devoid of trees until the 20th centurywhen these trees began growing. The damages from deforestation led to government intervention, as described in the Enrichment.
Photo Credit: Richard Alley

Enrichment: To learn more about how government intervention was implemented in our pioneering past, see the Enrichment titled Scarcity and Government Intervention in Colonial Massachusetts.

First, as described in the previous module, there is no requirement for complex regulations to respond to climate change. Indeed, a carbon tax on fossil fuels, at the point where they are extracted from the ground or imported into a country, could be simpler than some of the taxes it might replace. Most fossil fuels currently have some tax or impact fee levied on them, so many of the mechanisms to implement a carbon tax already exist. And there are far fewer producers of fossil fuels than there are people earning wages, so replacing wage taxes with carbon taxes could make many things easier.

An additional issue is that, in times of shortage or crisis, governments often become more active or intrusive—the recent recession led to “stimulus” activities in many countries, as did the depression of the 1930s, and natural disasters frequently motivate government efforts. Thus, careful actions to avoid shortages and natural disasters may limit government rather than promote it.

Hence, free-market proponents or libertarians might argue that their goals are better served by guiding simple and transparent policy responses to climate change rather than by opposing all responses.

An argument often coupled to limiting government is that responses to climate change should be avoided because governments should not be in the business of picking winners and losers. This argument might be applied to favor government actions that are general rather than specific. For example, people who do not want the government to specifically promote certain groups might favor a carbon tax rather than loan guarantees to start-up companies.

A silly and extreme example of government actions benefiting some people more than others may be a useful starting point. Suppose government-supported doctors stop an epidemic and save the lives of millions of people. In the short-term, the government has caused money loss for gravediggers, undertakers, shop owners selling sympathy cards and flower arrangements, the real estate agents and auctioneers who would have disposed of the property of the deceased, lawyers who would have handled the estates, and many others.

Perhaps more seriously, consider the history of the construction of modern storm and sanitary sewers, and clean water supply in London in the latter 1800s and in many other cities. This massive effort ended cholera outbreaks that had brought huge death tolls, and otherwise greatly improved public health and well-being. But, modern sanitation also ended whole professions such as “night-soil hauler” (those who gathered human waste and sold it to farmers as fertilizers), while making new professions—the government actions unequivocally created winners and losers. Furthermore, the transition to modern sanitation was greeted with many of the same arguments about government intervention, individual liberty, and natural processes that now address climate-change issues, including The Economist editorializing against aspects of the transition, as mentioned earlier.

A fascinating case study on the transition from "night-soil haulers" to sanitary sewers is dramatized in this clip.

Click here for a video transcript of "Toilets and the SMART GRID".

Richard Alley: So, the Earth provides lots of choices for clean, low carbon energy. And Brazil, China and Texas show there are ways forward. But can we afford it? Can society make the kinds of changes needed? Well, we've done it before. (Bagpipes play) Let's take a walk through history in Edinburgh, Scotland, but it could be many other big cities a couple of centuries ago. Here's what a visitor from London wrote in 1754--

[Man with English accent] "When I first came into the High Street of that city, I thought I had not seen anything of the kind more magnificent-- the extreme height of the houses, which are, for the most part, built with stone, and well sashed..."

Alley: It's evening, time for a wee bite! Scottish taverns, then as now, were noisy places, buzzing with good conversation and high spirits. The visitor from London dined well and drank a few glasses of fine French claret, but then his new friends did something that was second nature to them in the 18th Century, but seems very strange to us today.

[English accent] "The clock struck ten, then the company began to light pieces of paper, and throw them upon the table to smoke the room..."

Alley: Lighting those pieces of paper was meant to mix one bad smell with another. Chambermaid: "Gardyloo!"

Alley: You see, ten o'clock was when you could empty brimming chamber pots down into the streets. Chambermaid: "Gardyloo!" Man: "Hud your haunde"/ Hold your hand!

Alley: The London visitor safely dodged the terrible shower, but then he was forced to hide between his bed sheets to avoid the smell pouring into his room from the filth. And yet the people had gotten used to this, to the inconvenience and disease, and some people made a living hauling away the human waste. The English visitor thought all this simply had no remedy.

[English accent] "Anything so expensive as a conveyance for the waste down from the uppermost floor could never be agreed on. Nor could there be made, within the building, any receiver suitable to such numbers of people."

Alley: So, what do chamber pots have to do with carbon dioxide and sustainable energy? Not to mince words, we're pouring CO2, another form of human waste, into the public space, and we'll have to deal with the consequences if we don't clean it up. Today, of course, most of us have conveyances down from bathrooms, and sinks to wash in, and receivers for our waste. What happened?

Look around your house. How much did the porcelain throne in your bathroom really cost? It took a considerable investment for all those pipes bringing water to wash with, and to take the waste away. The revolution in hygiene involved an extensive infrastructure of toilets in homes, sewers underneath our cities, water treatment plants. Today we might call it the Sanitation Smart Grid. So, how much did all this cost? Not that much, if you consider the millions of lives saved with clean water, prevention of diseases like cholera and typhoid-- something like 1% of the economy, in very round numbers. And that's more or less the estimated cost of switching the world to a sustainable energy system that doesn't dump fossil fuel CO2 into the public space. Cleaning up the cities took decades and even centuries, and we're trying to do things a little faster, but the revolution in waste management shows that we can do big things to get benefits that none of us would ever walk away from. 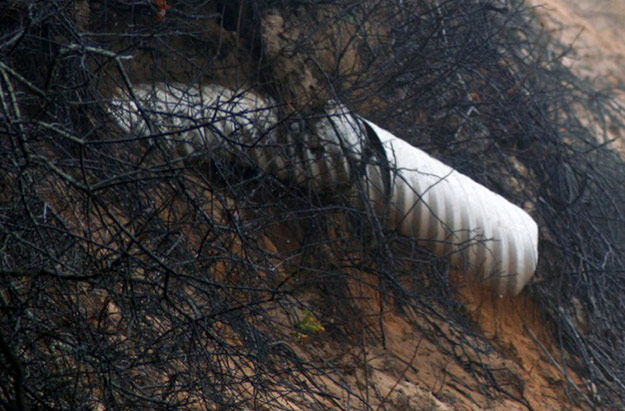 Until they break, we seldom think about sewer pipes, water pipes, and all the other infrastructure we, or our ancestors, have built to supply clean water and remove human waste. This pipe was revealed by beach erosion cutting into developed areas along the great outer beach of Cape Cod, Eastham, Massachusetts, USA.
Photo Credit: Richard Alley

The analogy to the modern situation with CO2 is not exact. When London was deciding about sewers, the scientific knowledge showing that human waste in drinking water spread cholera was not nearly so strong as the scientific knowledge we now have showing that CO2 from fossil fuels in the air changes the climate; the Londoners did not have knowledge of the mechanism causing the illness, for example. But, “clean this up or you might die next week” tends to provide a stronger motivation than “clean this up or risk a suboptimal economy over the next decades”. The issues of attribution of extremes are very relevant here, though; people now are dying in disasters that cannot be said to have been caused by climate change, but that are being made more likely or worse by climate change. 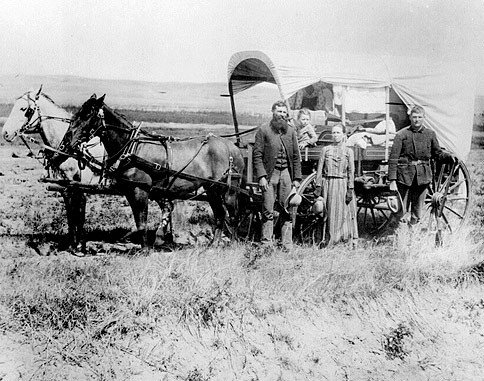 Enrichment: For more on the history of winners and loses from interactions with governments, see the Enrichment titled Public-Private Partnerships in Oklahoma.

‹ Wanting What We Do up Environmentalists for Economic Growth? ›

Earth 104: Energy and the Environment (Development)