The world’s governments have agreed, through the United Nations Framework Convention on Climate Change (UNFCCC), to avoid dangerous anthropogenic influence on the climate system. What exactly that means was not spelled out in the Convention, but many people have tried to interpret it.

Perhaps the easiest interpretation is that, as global average temperature rises, damages rise faster, so temperature change must be limited to some chosen value. Some groups have advocated for 2°C above the average for some specified time before the bulk of human-caused global warming. As discussed in Unit 1, stopping the warming at 2°C would require considering many human-caused changes, including the warming effects of methane, nitrous oxide, and other gases, such as chlorofluorocarbons, the effect of soot on the reflectivity of snow, and more, although CO2 is still the biggest issue. If we go too far beyond 2°C, we are fairly confident that CO2 dominates, because it has the biggest source and stays around long enough to really accumulate in the atmosphere. And, in that case, it doesn’t matter where the CO2 was emitted, and it doesn’t matter very much when the CO2 was emitted because it mixes around the globe and accumulates in the air. Thus, if we were to accept a number such as 2°C warming, or 3°C, or 4°C, then we have essentially specified the total amount of fossil-fuel CO2 we can emit to the atmosphere.

If you looked at the Enrichment earlier in this module about Eastham, Massachusetts, you saw a tiny bit of the long history of people negotiating over rights and responsibilities of “commons”, those parts of the Earth that we control together rather than individually. The atmosphere and ocean are the greatest commons of all, spreading whatever we do around the globe and thus linking all of us.

Per nation, China is now the biggest emitter of CO2 per year. But, per person, China still falls far behind many other countries including the United States. And, if you include emissions in the past, China is not even close to much of the developed world. But, is a modern Briton really responsible for the industrial revolution?

We might decide to divide the allowable emissions by country, or by person and might use future emissions only, or include past emissions back some time to be determined. (R.T. Pierrehumbert, 2013, Cumulative carbon and just allocation of the global carbon commons, Chicago Journal of International Law 13, 527-548.) This is a quite different approach than the economic optimizations, and strikes many people as being inherently fairer—each person (or perhaps each country) gets a share. One could even set up a program of trading the shares, in a cap-and-trade system.

Additional issues arise, however, and, history may matter in additional ways. A sustainable future seems likely to involve solar cells and a smart grid with a lot of computer power. The solar cells and transistors for the computers were invented at Bell Labs, in the USA. One might make a case that some fossil-fuel burners have used the energy to contribute to the valuable intellectual commons. Indeed, it is almost impossible for a person to live without having some negative impact on the carrying capacity of the planet, so one might balance the negative against the positive—did someone, or some country, contribute more than they took?

This issue can become rather personal. Dr. Alley travels a lot to do research and communicate about energy and environment. Personally, he has taken actions such as bicycling rather than driving to his office, and his family works in other ways to reduce emissions. But, those efforts don’t fully offset the effects of his travels. He tries hard to “phone in” talks and meetings rather than traveling, but he still travels. Is he wrong to travel to do the research and communicate the results? You might argue that he is. 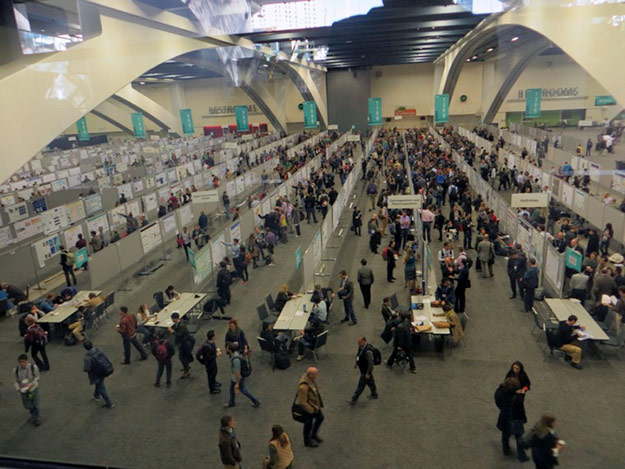 A poster session at the American Geophysical Union Fall Meeting, Moscone Center South, San Francisco, California, USA, December 2013. Many scientists who are very concerned about the climatic effects of greenhouse-gas emissions traveled to this meeting, and travel to similar meetings elsewhere. Some of these scientists buy “offsets” or take other actions to reduce their CO2 emissions, but others may not. You could argue that these scientists are somehow hypocritical to worry about greenhouse warming while contributing to it, but you also could argue that they have a moral obligation to travel to such meetings to learn about the dangers of climate change and how to address them, and then communicate this information to the broader community.
Photo Credit: Richard Alley

But, if all of the scholars who understand the problem were to sit down and shut up the moment they understand, would the rest of the world ever gain the knowledge needed to reach a sustainable future? A stunt biker trying to jump over an obstacle will accelerate to hit the ramp hard, and many people believe that in studying and communicating about the Earth, scholars are doing the same thing, accelerating towards a possible problem so that we can jump over it.

Indeed, most people, if they see a person in danger, will provide warning and try to help, and will disapprove strongly of someone who fails to warn an endangered person. (In certain circumstances, failure to warn or failure to report can be a crime.) So, are scientists and engineers morally obligated to travel and communicate and invent and build to warn and help fellow humans? A firefighter battling a dangerous blaze may set a small fire to control a big one; are the CO2 emissions of some travelers fully analogous? And, does such CO2 count against the “fair share” that started this section?

We won’t answer any of these questions for you. But, we suspect that in thinking about them and discussing them with others, you will gain interesting insights that might help many other people. Instead, we’ll move on to some topics that may prove a little easier.

‹ Environmentalists for Economic Growth? up Pure Rate of Time Preference ›

Earth 104: Energy and the Environment (Development)