Rain can grow corn as well as trees, and corn can grow people. Thus, knowing something about trees, corn, and people, a team of scientists can start with tree rings and learn how many Ancestral Puebloan people could have lived in an area. Meanwhile, archaeologists are able to use their techniques of digging and dating to learn how many people actually lived in an area. Teams of archaeologists and tree-ring climatologists did this research at the “end of the road” in the small, remote Long House Valley, which was not a trading center.

What they learned is striking, as shown in the figure. 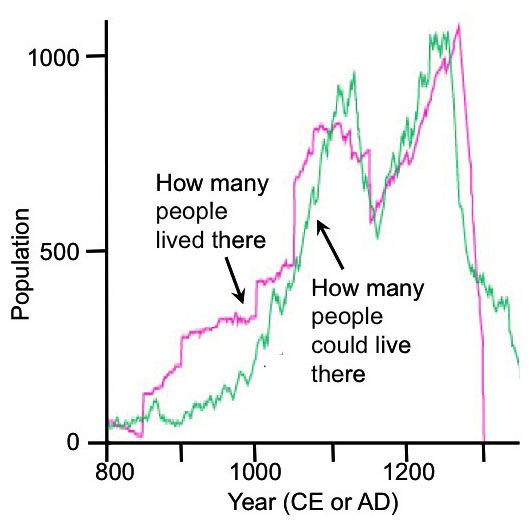 Next, take a look at a similar history, from Oklahoma over the last century. The Dust Bowl of the 1930s was a major drought, made worse by various economic decisions about land use. Wonderful literature documents the terrible economy and environment, as people suffered and died. 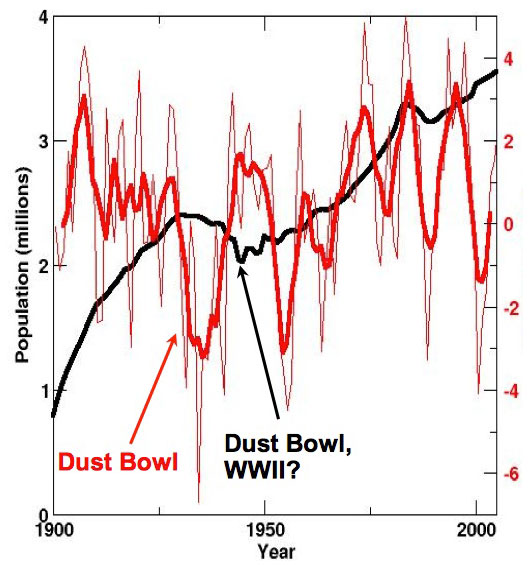 History of drought (the red, bumpier line, with down showing dry) and population (the black, smoother line) in Oklahoma in the 20th century. The Dust Bowl was a terrible time for the people living there but had a relatively small impact on the population, and more recent droughts have affected the population even less.
Source: Data from NOAA and the U.S. Census Bureau

Yet, even today, where the economic resources are not available, as in the African Sahel, droughts have huge consequences and drive widespread starvation or migrations of environmental refugees.

Every person I ever met who studied the ancestral Puebloan people of Mesa Verde and surroundings has come away deeply impressed with the resourcefulness and cleverness of the people. The difference between Puebloan and Oklahoman success during drought is not because one group was smart and the other wasn’t. But the technologies and trade are vastly different (for many reasons!), and the people who could call on more tools and more help were more successful. Some of those tools were wind-powered, but most ran on fossil fuels, and success has increased as the use of fossil fuels increased.

Want to know more?
Take a look at the Enrichment called Burning for Learning

‹ Dealing with Drought up Running Out of Trees ›