Do you ever empty the lawn-mower bag to get your dinner? Or chew up a handful of wheat or leaves from the maple tree? How about raw meat?

Cows can succeed by eating grass, but they have four stomachs and spend a lot of time “chewing their cud” to help break down the grass to be digested. Caterpillars can eat wheat or maple leaves, but a whole lot of a caterpillar is a digestive tract. And many predators eat raw meat.

But, we don’t do any of these things. We have mastered the art of using fire to cook our food. This kills parasites, but it also starts the process of digestion. We don’t have the type of digestive system that would allow us to get enough energy out of leaves and grass or “raw” wheat and raw meat, to keep us active enough to grow, harvest or catch those foods in the wild. If you are dieting to lose weight, eating raw vegetables is a great idea; if you are trying to survive the winter as a fur trapper in some remote part of the Yukon, you might look for something that supplies a bit more energy.

Fire may be the big difference between humans and other primates. If we didn’t cook, we wouldn’t get enough energy from our food to supply our big brains. Instead, we’d need a bigger or longer digestive system to process leaves and seeds and roots and raw meat, but the extra digestive system would use up a lot of the energy it extracted from such things to keep itself alive, with not enough energy left over to support all the extra gray matter between our ears. We really may have needed to burn to learn! 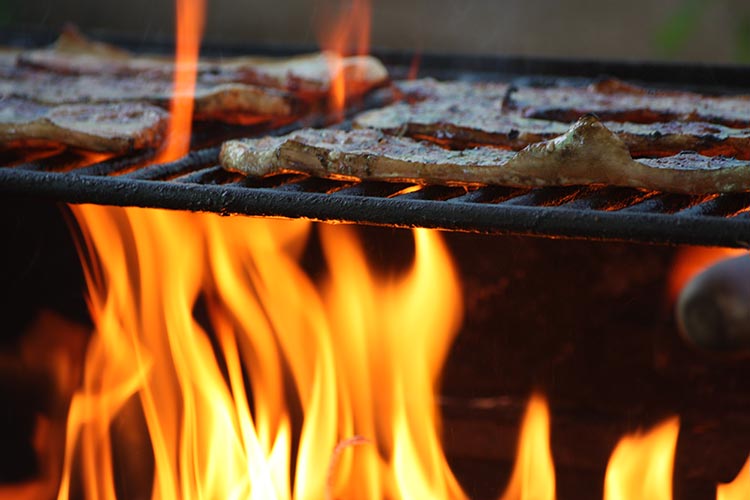 We’ll probably never know for sure whether fire was really required for us to survive as humans, but there is no question that it makes life easier in many ways. Staying warm in an Arctic winter is much, much easier with a fire than without one. Fire helps in scaring away predators, killing bad things in food, and more. For example, the native people of the eastern US grew corn, beans, and squash in clearings in the forest. Chopping down trees with stone axes is not easy; “girdling” by cutting the bark will kill the trees, and fire can then be used to clear the land and keep it clear. (Slash-and-burn agriculture is not a new invention!)

Burning wood is just one of the ways that we humans use to get someone or something else to do some of our work for us. Rather than being limited by the energy we can get from our metabolism (the food we “burn” inside of us), we get lots of extra energy by burning other things outside of us. We burn coal, natural gas, and petroleum to generate most of our electricity and power our machines.  We all use this energy and our share of it is something like 100 times as great as the energy we consume in the form of food!  So our external energy use is far greater than our internal energy use from food.

Shortly after the last ice age ended, hunter-gatherers in many parts of the world began settling down and developing agriculture. This switch to growing food may not have been possible during the highly variable climate of the ice age. This switch helped fuel a major growth in population that continues today. But, by many measures, the switch also caused the new farmers to become less healthy, eating a less varied diet and suffering from more diseases-disease organisms and parasites enjoyed it when their human hosts settled down close together, making it easy to cause more sickness! You will find LOTS of ideas about why our ancestors settled down and started growing crops. One big possibility is that the world was nearly full of hunter-gatherers-the good places for finding something to eat were already taken, people died in marginal areas during bad years, people didn’t want their children to die, so they developed a new “technology” to feed themselves.

Very few people today have spent enough time with a shovel or hoe to know how difficult agriculture can be, even with modern tools. Plowing and cultivating are hard work. So, perhaps as early as 8000 years ago, people were figuring out how to get oxen to pull plows. This was NOT an easy undertaking, requiring selective breeding to domesticate wild creatures, then feeding those creatures and protecting them from predators and keeping them from running away, and inventing yokes and plows and convincing the oxen to wear the yokes and pull the plows. Yet all of this effort and more was easier for early agriculturalists than actually doing the digging themselves. Once again, people were getting ahead by getting something else to do their work for them.

‹ Enrichments up Module 2: What is Energy? ›