The greenhouse gases now in the air do keep the Earth’s surface warmer than it otherwise would be, and adding more greenhouse gases will cause more warming. There is nothing new, surprising, or honestly controversial in any of this. With a calculation something like the one in The Simplest Climate Model (read more about it in the enrichments), the French scientist Jean Fourier discovered in 1824 that something was keeping the Earth’s surface anomalously warm, and among the hypotheses he considered was that the atmosphere is acting something like glass holding heat in a container (perhaps the origin of the comparison to a greenhouse; see The Discovery of Global Warming). The British physicist John Tyndall showed in 1859 that gases in the air, including water vapor and carbon dioxide, were contributing to the greenhouse effect. And, in 1896, the Swedish physical chemist and Nobel Prize winner Svante Arrhenius did a fairly good job of calculating the global warming from the carbon dioxide released by the human burning of fossil fuels. (Through history, scientists have actually been better at calculating the effects of greenhouse gases than at realizing just how incredibly skillful fossil-fuel companies would become at supplying large quantities.) 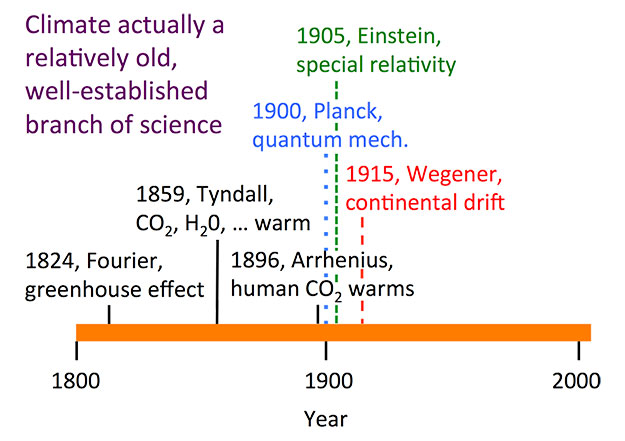 A brief history of some major advances in climate science and other fields. Climate science is NOT new.
Source: Diagrams by Richard B. Alley

The science of the greenhouse effect thus is not some new discovery but has a long history compared to such “recent” science as relativity (Albert Einstein, 1905) or quantum mechanics (Max Planck, 1900). The pioneers who explored radiation in climate science were giants of physics, chemistry, and mathematics, who saw the strong interactions between laboratory studies and application to the atmosphere.

Much of the work on the details of the interaction between radiation and gases in the air was done by the US Air Force just after World War II and applied to topics such as sensors on heat-seeking missiles, as told in the introduction to this chapter. A missile uses a sensor to “see” the infrared radiation from a hot engine, but greenhouse gases such as carbon dioxide and water vapor block the view in some wavelengths by absorbing that radiation. Because the gases interact with radiation traveling in any direction, and there is much more energy in those wavelengths going up from the sun-warmed Earth than coming down from military bombers, the warming influence of the greenhouse gases is unavoidable. 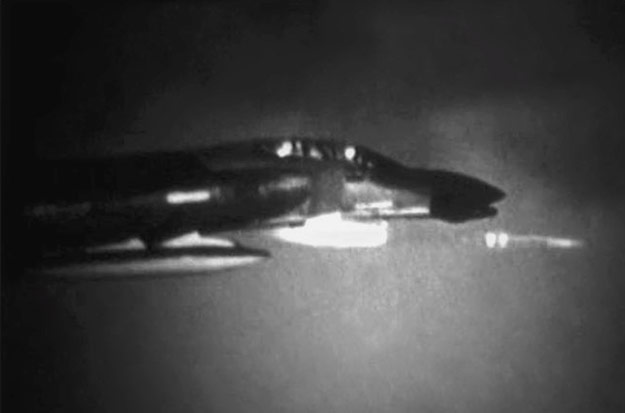 This 9-minute clip will appear three times within modules 4 and 5 this week. To see a short clip on the Air Force's role in understanding the physics of the atmosphere and the warming effect of CO2, watch the first 1 minute and 20 seconds. The material that follows this 1 minute and 20 seconds will be covered later in this module as well as in Module 5.

Click here for a video transcript of the "CO2 and the Atmosphere".

What CO2 does was confirmed by basic research that had absolutely nothing to do with climate change. (newsreel announcer) A continuance of the upper air program will provide scientific data concerning the physics of the upper atmosphere. (Richard Alley) World War II was over, but the Cold War had begun. The U.S. Air Force needed to understand the atmosphere for communications and to design heat-seeking missiles.

At certain wavelengths carbon dioxide and water vapor block radiation. So the new missiles couldn't see very far if they used a wavelength that CO2 absorbs. Research at the Air Force Geophysics Laboratory in Hanscom, Massachusetts produced an immense database with careful measurements of atmospheric gases. Further research by others applied and extended those discoveries, clearly showing the heat-trapping influence of CO2. The Air Force hadn't set out to study global warming, they just wanted their missiles to work. But physics is physics. The atmosphere doesn't care if you're studying it for warring or warming. Adding CO2 turns up the planet's thermostat. It works the other way as well. Remove CO2, and things cool down. These are the Southern Alps of New Zealand, and their climate history shows that the physicists really got it right. These deep, thick piles of frozen water are glaciers, slow-moving rivers of ice, sitting on land... But once, when temperatures were warmer, they were liquid water, stored in the sea. We're going to follow this one, the Franz Josef, from summit to ocean to see the real-world impact of changing levels of CO2.

It's beautiful up here on the highest snowfield, but dangers lurk beneath the surface. I've spent a lot of time on the ice. It's standard practice up here to travel in pairs, roped up for safety. The glacier is fed by something like six meters of water a year... maybe 20 meters, 60 feet of snowfall... it's a really seriously high snowfall. The snow and ice spread under their own weight and is headed downhill at something like a kilometer a year. When ice is speeding up a lot as it flows towards the coast it can crack and open great crevasses that give you a view into the guts of the glacier. Man, this is a big one... Ten... Twenty... Thirty meters more... a hundred feet or more heading down in here, and we can see a whole lot of the structure of the glacier right here.

(man) So, what we're going to do is just gonna sit on the edge and then walk backward, and I'll lower you. Tell me when. Okay, rolling around, and down we go. Snowfall arrives in layers, each storm putting one down... Summer sun heats the snow and makes it look a little bit different than the winter snow, and so you build up a history. In these layers, there are indications of climate, how much it snowed, what the temperature was. And all of this is being buried by more snow and the weight of that snow squeezes what's beneath it, and turns it to ice. And in doing that, it can trap bubbles. And in those bubbles are samples of old air, a record of the composition of the Earth's atmosphere, including how much CO2 was in it, a record of the temperature on the ice sheets, and how much it snowed. As we'll see, we can open those icy bottles of ancient air, and study the history of Earth's atmosphere.

This landscape also tells the story of the Ice Ages. And the forces that have shaped Earth's climate. Over the last millions of years, the brightness of the sun doesn't seem to have changed much, but the Earth's orbit and the tilt of its axis have shifted in regular patterns over tens and hundreds of thousands of years. The orbit changes shape... varying how close and far the Earth gets as it orbits the sun each year.

Over 41,000 years, the tilt of Earth's axis gets larger and smaller, shifting some of the sunshine from the equator to the poles and back. And our planet has a slight wobble, like a child's top, altering which hemisphere is most directly pointed toward the sun when Earth is closest to it. Over tens of thousands of years, these natural variations shift sunlight around on the planet, and that influences climate. More than 20,000 years ago, decreasing amounts of sunshine in the Arctic allowed great ice sheets to grow across North America and Eurasia, reaching the modern sites of New York and Chicago. Sea level fell as water was locked up on land. Changing currents let the oceans absorb CO2 from the air. That cooled the southern hemisphere and unleashed the immense power of glaciers such as the Franz Josef, which advanced down this wide valley, filling it with deep, thick ice. Now we're flying over today's coastline, where giant boulders are leftovers from that last ice age.

A glacier is a great earthmoving machine. It's a dump truck that carries rocks that fall on top of it. It's a bulldozer that pushes rocks in front of it. And it outlines itself with those rocks making a deposit that we call a moraine that tells us where the glacier has been. We're 20 kilometers, 12 miles, from the front of the Franz Josef glacier today, but about 20,000 years ago, the ice was depositing these rocks as it flowed past us and out to sea. The rocks we can still see today confirm where the glacier once was. Now, in a computer-generated time-lapse, condensing thousands of years of Earth's history, we're seeing what happened. Lower CO2, colder temperatures, more snow and ice, and the Franz Josef advanced.

Twenty thousand years ago, 30% of today's land area was covered by great ice sheets, which locked up so much water that the global sea level was almost 400 feet lower than today. Then, as Earth's orbit changed, temperatures and CO2 rose, and the glacier melted back. The orbits set the stage, but by themselves, they weren't enough. We need the warming and cooling effects of rising and falling CO2 to explain the changes we know happened.

Today, atmospheric CO2 is increasing still more, temperatures are rising, and glaciers and ice sheets are melting. You can see this clearly on the lake formed by the shrinking Tasman Glacier, across the range from the Franz Josef. This is what the end of an ice age looks like. Glaciers falling apart, new lakes, new land, icebergs coming off the front of the ice. In the early 1980s, we would have been inside New Zealand's Tasman Glacier right here. Now we're passing icebergs in a new lake from a glacier that has mostly fallen apart and ends over six kilometers, four miles away.

One glacier doesn't tell us what the world is doing, but while the Tasman has been retreating, the great majority of glaciers on the planet have gotten smaller. This is the Columbia Glacier in Alaska. It's a type of glacier that makes the effects of warming easy to see. It's been retreating so fast that the Extreme Ice Survey had to reposition their time-lapse cameras to follow its motion. In Iceland, warming air temperatures have made this glacier simply melt away, leaving streams and small lakes behind. Thermometers in the air show warming, thermometers in the air far from cities, show warming.

Put your thermometer in the ground, in the ocean, look down from satellites, they show warming. The evidence is clear. The earth's climate is warming.