In this first case, we’ll just consider the proven reserves, and we’ll assume that the oil produced is a constant percentage of how much remains in the proven reserves. The logic here is very simple — if there is more oil, you can produce more in a period of time, while if there is less oil, you produce less in the same time period — but the percentage remains the same.

Here is what the system looks like as a STELLA model:

Since this model is simply meant to illustrate the general pattern of oil/gas production resulting from an assumption of how production works, we’re not going to worry about the actual values, but you can think of the starting amount of Proven Reserves as 100% of what we have. Every year, we produce oil/gas at the rate of 2% of however much remains in the Proven Reserves reservoir. The production flow transfers oil/gas into the Produced Oil reservoir, so we can keep track of the total amount of oil/gas produced over time.

Let’s see if we can predict what will happen by doing a few simple calculations. When the model first begins:

Notice that the production is declining as time goes on, and the amount of decline is getting smaller. If this pattern continues, the production will follow an exponential decline curve — like this: 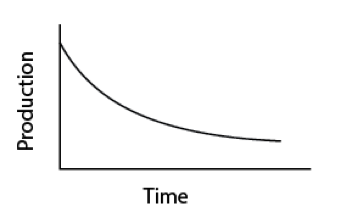 Take a few minutes to watch the following video and learn about the browser-hosted STELLA model interface, before running the model.

Click here for a video transcript of "Peak Oil Model 1".

PRESENTER: This is actually the cover of a piece of sheet music that was published in 1864 in New York. This is "The American Petroleum Polka," or charge, or gallop, or waltz, or march. And it has a picture of a beautiful Pennsylvania scene, the oil well spouting its oil. Now oil was black back then. Oil is still black. But you couldn't have black oil falling on the lady's pink dress, so they made the oil white.

And then bragging, "This oil well threw pure oil a 100 feet high." people understood the value that you get from oil, from petroleum. And they celebrated that.

Now, let’s run the model and see what happens. Follow this link to the Peak Oil Model which should be set up exactly the same as the diagram above. Answer the questions either on the worksheet you downloaded or on a piece of paper to be submitted later to the Module 3 Summative Assessment (Graded) quiz. If you didn't download the worksheet on the main page of this assessment, do it now.

1A. Does the production history agree with our simple calculations (position the cursor on the graph and it will show you the values at different times)?

‹ Oil and Gas Reserves up 2. Oil Production with Improving Technology ›