3. Including Price in the Production Flow

In addition to technology, economics also plays a role in the production of oil/gas in the sense that higher prices will motivate greater production. Let’s assume that the as the supply of proven reserves drops, the price will rise. As long as there is a demand for oil and gas, as it becomes more scarce, it will become more valuable. This is a pretty simplistic view of what determines the price of oil and gas — reality is much more complex, which is why prices fluctuate quite a bit over time. But it is hard to escape the basic reality that as a desirable commodity becomes scarce, its value goes up.

To make this change in the model, we need to add something that will calculate the price. This new model looks like this: 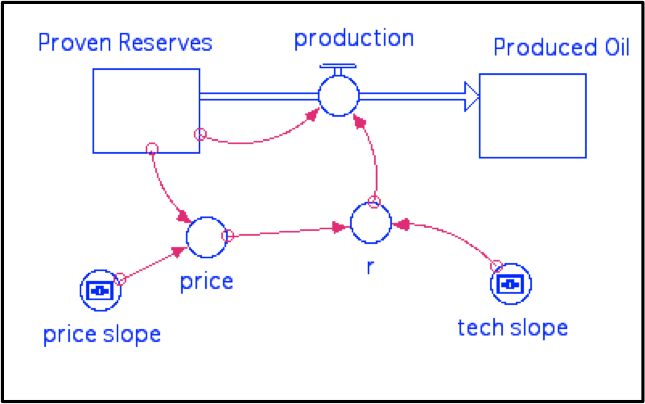 What we have created here is a system with a feedback mechanism. Here is how it works: 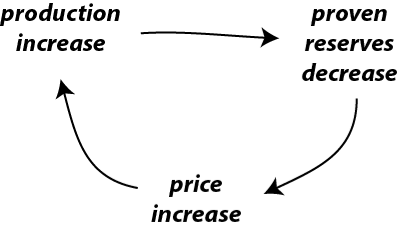 Take a few minutes to watch the video below to learn more about the positive feedback mechanism the oil production model before running the next model.

This simple diagram is meant to represent the positive feedback mechanism that we've put into the model. So if you imagine that we begin with a production increase. That's the initial change. Let's say something happens and we increase production. That is going to cause the proven reserves to decrease, right, because production drains that reservoir. So as that goes down, the commodity becomes more scarce and because of that, the price goes up. So that's another effect here that's triggered by the production increase. And as the price is increased, that will then encourage us to do even more to try to produce more of the oil that's out there. It's an incentive to produce more oil.

So that leads to an increase in production again. So the initial change that began this was the production increase and that has end up triggering a series of responses in the model that lead to a further increase in price, and so when that happens, this is called a positive feedback mechanism. It's kind of like a cause and effect loop, right. So here's a cause, it makes in effect, it makes an effect, makes another effect that comes back on that cause and enhances it. So that's going to really change the way that this model behaves.

Open the model here, and run it.

This model has two pages of graphs to look at; the first one shows the Proven Reserves, Produced Oil, price, and production, and r (which combines price and tech slope), while the second one shows just the production. The second graph retains the results from previous model runs, allowing you to make comparisons as you make changes to some of the adjustable model parameters. If you want to clear this graph, hit the Restore Graphs button.

3A. First, run the model as it is, with the price slope set to 0.05 and the tech slope set to 0.0002. Note the time and magnitude of the peak in production. Then alter the tech slope or price slope as prescribed, using the new values provided. Run the model and compare the peak time and magnitude with the original case (use page 2 of the graph pad). Use “sooner” or “later” and “greater” or “smaller” to describe how your alterations changed the timing and magnitude of the peak in production.

Change in time of peak =

Change in magnitude of peak =

3B. Use the sliders above the graph to try out a range of different values for the price slope and the tech slope. Run the model with these different settings and see if you can make the peak in oil production go away. Is it possible to avoid a peak in production?

a) Yes — there are just a few cases in which a peak occurs
b) No — it is impossible; the best you can do is a broad, low peak that takes a long time to develop.

‹ 2. Oil Production with Improving Technology up 4. Production Driven by Demand From a Growing Population ›