4. Production Driven by Demand From a Growing Population

For our next experiment, we’ll try a different assumption about what drives oil/gas production — demand. The demand for oil and gas has risen over time due to an increase in the global population and an increase in the per capita energy consumption. Here is what this modified version of the model looks like: 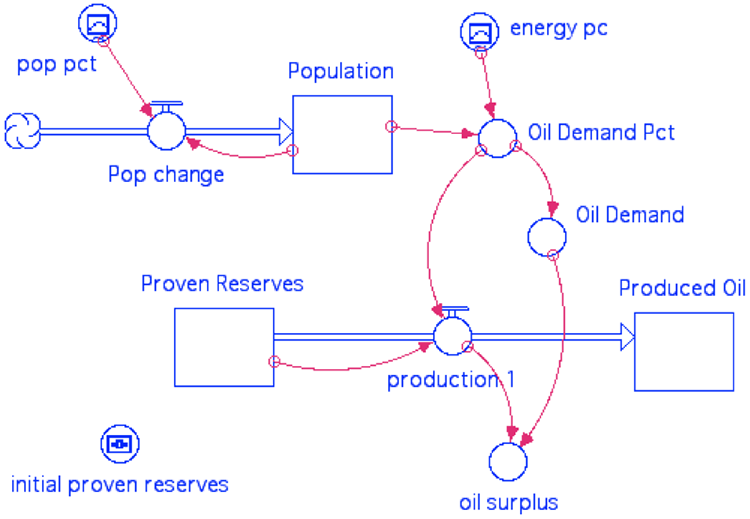 Here, the population increases according to pop pct, which is the net growth percentage per year derived from historical data and then extrapolated into the future — so it is a graphical function that changes over time. The population starts at the 1800 level of 1 billion; the net growth % drops to 0 in 2100, and at that point, the population will stabilize.

This model also includes a component called per capita oil that keeps track of how much oil is actually available per person, by taking the production and dividing it by the population. As per capita oil increases, we can use more and more oil for our energy needs, but as it decreases, we will have to either reduce our energy consumption or turn to other sources to meet our energy demands.

4A. Can you guess what will happen? Remember that r here is just like r in the earlier models, and you’ve seen what happens to the production history when r increases over time. Which of the following represents your approximate prediction?

a) Production will increase throughout the model run

b) Production will decrease throughout the model run

c) Production will peak sometime during the model run

Now run the model by clicking this link, and and see what happens. We will consider this as the “control” for the next experiment.

(above numbers refer to trillions of barrels of oil)

4B. How will changing the initial size of the Proven Reserves reservoir affect the history of production? Set the initial Proven Reserves to 2.0 for the Practice Assessment (3.5 for the Graded Assessment) and then run the model and see what happens; choose the response below that best represents how your altered model compares with the control. Page 2 of the graph pad will be useful in making this comparison.


As you can see, this model suggests that our future use of oil will be a little like traveling back in time.
‹ 3. Including Price in the Production Flow up 5. Adding Unproven Reserves ›