For our last experiment, we’ll see what happens when we add two more reservoirs, Unproven Reserves (the oil and gas that we think is likely to be discovered in the future) and Unknown Oil (the oil and gas we don’t know about, but might be there). Discovery adds Unproven Reserves to the Proven Reserves reservoir, and another flow called discovery adds Unknown Oil to the Unproven reservoir. An example from the Arctic Ocean region helps us get a grasp of these unknown reserves. In this frontier region, less than half of the offshore sedimentary basins have been explored, but based on what is known from more serious exploration off the coast of Alaska, the USGS estimates that there might be ~130 billion barrels of oil and gas — so this is a resource that we think might exist, but not enough is known about it yet to put it into the unproven reserves category, which applies to oil reserves that we know exist, but we don’t know enough about them to put them into the proven reserves. For perspective, this Arctic Ocean oil might represent 10-15% of all the unknown oil/gas that remains, and it would be enough to last for 4 years at the current rate of global use.

The discovery of these new resources is a function of a rate constant that increases over time, dictated by something called the exploration slope. The discovery flow that leads from Unknown to Unproven Reserves is set to be 1/5 the rate of the other discovery flow, reflecting the fact that it is much harder to discover something we know little about. Both of the discovery flows are controlled by switches (they can be turned on or off) and they begin (if the switch is on) at a time that can be set using the explor start time control knob. Here is what this new model looks like: 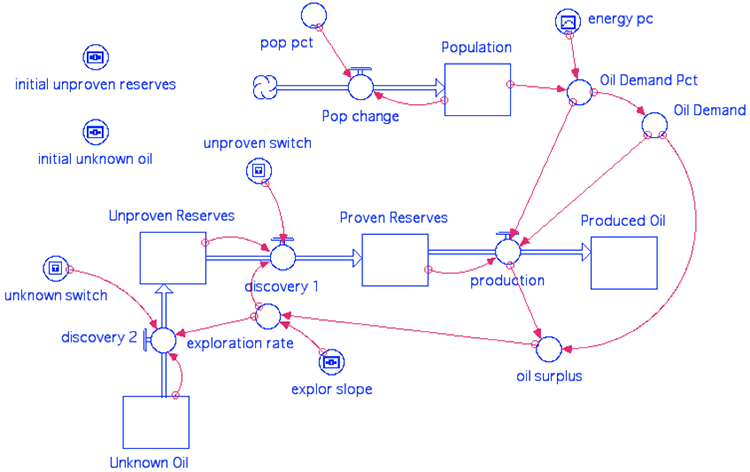 5A. How will these new sources of oil/gas change the production history? The total amount of produced oil obviously must be greater than in our model from experiment 4, but how about the shape of that production curve? Will there be a peak, as before? If so, what will that peak look like?

a) Yes, it will still peak, but the peak will be broader than before

b) No, it will not peak — the production will rise and then remain steady

c) Yes, it will peak, but the peak will be delayed and it will be bigger

Before launching the model and experimenting with it, take a few minutes and watch the video that explains how to operate the switches that can turn the discovery flows on and off.

Click here for a video transcript of "Peak Oil Intro".

PRESENTER: This last model has some new features added to it. And so I want to explain these before you play with this model. It includes two new reservoirs, unproven reserves, and unknown oil here. And these can be tapped into through a process of discovery and eventually flow into the proven reserves, here.

These two discovery flows here are controlled by switches. And I'll show you those switches in a second. You can turn them on or off. And they're also controlled by a timer, here, that controls when we really tap into these other potential sources of oil. Other than that, it's quite similar to the other model.

Here's what it looks like when you interact with the model. You open the model, you'll see this. You can turn on these switches here, there's the unproven switch, and here's the unknown switch. Now, we're set to tap into those two new sources of oil.

And then down here, we control the time when we would start to produce that oil. So let me turn these things off first, the switches. There's one switch turned off. There's another one off.

I'm just going to go ahead and run this model. It's running now from 1800 to the year 2600, and here it shows the production peaking here at about the year 2000, then dropping off. Here's the population leveling off at-- I got it leveling off at 11.7 billion here, in this case almost 12 billion.

Now, watch this, if I turn on this unproven switch here, and run the model, you can see the production curve changes. See that? Gets bumped out. Basically, because of the addition of this oil here produced by discovery.

So then if we put this one on here, turn that on, then we can even make a more gradual decline in this production curve. So we're tapping into these new sources, and it makes that decline from the peak here, much more gradual.

So this is just a little bit more optimistic model.

Open the model here by clicking the link, and first make sure the switches are in the off position (down), disabling the two discovery flows. Run the model and you should see exactly the same thing you saw in experiment 4B, with the difference that it runs for a longer period of time. If you study the graphs #3 and #7 show comparative plots of the production (in billions of barrels per year) and oil per capita (in barrels). Make sure you watch the video above to get a general sense of what happens when you turn on the switches.

5B-D. Set the model up using the initial values provided. Use the slider bars at the top to set the initial unproven reserves and the initial unknown oil, and use the dial near the lower right to set the explore start time (the time when we begin to develop and produce the unproven reserves and unknown oil. This dial is a bit hard to adjust precisely, but if you are within a year or two of the specified date, it will be fine. Then run the model with both switches off, then run it again with the unproven switch turned on and then one more time with both switches turned on. Evaluate the differences between these three model runs in terms of the production (graph #3) and the oil per capita (#7). There are many ways to evaluate the effects of adding these new sources of oil, but we’ll focus on the size and timing of the production peak, and the oil per capita in the year 2100.

5D. Peak in production with both switches on compared to control (with no switches on).

5F. Can a peak in oil production be avoided? In other words, is it possible to find some combination of model parameters that results in more of a plateau in oil production? To figure this out, try changing the exploration slope (this will control that rate that the discovery flows increase), and the exploration start time. We’ll leave the unproven and unknown reserves at 3.0 because this is already a very optimistic outlook.

6. In your own words, summarize the effects of 1) improving technology (of oil production); 2) the price-production feedback; and 3) growing population on the history of oil production.

‹ 4. Production Driven by Demand From a Growing Population up Summary ›