Maggie Koerth-Baker has a really great article on how nuclear power plants work, with a focus on the nuclear fission reaction and what mechanisms in a nuclear power plant keep the reaction from spinning out of control. It was written right after the incident at Fukushima Daichi. Before continuing on, please have a look at the article, and pay some attention not only to how plants work, but how the nuclear reactions inside the plants are controlled. The article also has a really nice description of how reactions at nuclear power plants can keep cascading even after the plant has been “shut down,” which is basically what causes meltdowns like those that happened in the Three Mile Island and Chernobyl power plants.

Nuclear Energy 101: Inside the "black box" of Power Plants

As described in the article linked above, when a reactor core shuts down, it doesn't go all the way to zero immediately. It takes several days for the reactor to stop producing heat, which is typically what leads to meltdowns when they happen. Why isn't shutting down a reactor core like flipping a switch?

ANSWER: The control rods used to shut down a reactor core work by isolating the fuel rods from each other. This prevents new nuclear reactions from initiating. However, the control rods do not isolate or "shut down" individual uranium atoms within the same fuel rod, which means that reactions already in progress will continue until they have run their natural course.

There are two basic types of atomic reactions. The first is nuclear fusion, with which we are all intimately familiar, whether we know it or not. It is nuclear fusion that keeps the sun hot. In nuclear fusion, atoms are joined together. The word “joined” here is a bit of scientific jargon. In reality, the energy is released when atoms collide together at really high speeds. If you have ever seen two cars collide at high speed, you have some idea of how energy could be released when things hit each other. Despite years of research into nuclear fusion, scientists have never been able to engineer a controllable reaction in a laboratory environment. If they could, most of the world’s energy problems would basically be solved overnight, since the amount of energy released through a fusion reaction would be massive. But for now, fusion goes in the “maybe someday” pile.

The second type of nuclear reaction is fission, which is the opposite of fusion – atoms are broken apart, which also releases energy. U-235 is naturally radioactive, meaning that the nucleus is unstable, and it will eventually give off some energy and parts of its nucleus to get to a stable atom, but this takes a long time — the half-life is 700 million years.  The figure below illustrates roughly how this works. An atom (in the case of a nuclear power plant, a uranium-235 atom) is bombarded with neutrons, some of which are absorbed by the nucleus, so the U-235 becomes U-236 — this makes it even more unstable, so the atom splits apart into two lighter atoms called the daughter products.  U-236 splits into krypton (Kr-92) and barium (Ba-141), and it also releases energy in the form of heat, gamma radiation (bad for us) and 3 neutrons. (Note that if you add up the weight of the daughter products and the neutrons,  92+141+3, you get 236, the weight of the U-236 that split apart).  These neutrons come hurtling out of the original atom and smash into other uranium-235 atoms, triggering 3 more U-235 fission reactions, each of which generates 3 more neutrons.  As you can see, before long, there are a lot of neutrons and thus a lot of reactions and thus a lot of heat, which heat the water surrounding the fuel rods, creating steam, spinning the turbine — just like many of the other systems for making electricity.

The nuclear fission reaction described above is an example of a positive feedback mechanism that will naturally tend to speed up until all of the fuel (the U-235) is used up.  This means that it has a tendency to create more and more heat, and if left unchecked, this would cause the water in the reactor vessel to get too hot and build up too much pressure for the reactor to contain — then you would have a big steam explosion, such as happened at Chernobyl.  To control this reaction, the reactor core has a series of control rods, made of materials that absorb the neutrons emitted during a fission reaction.  So the control rods allow the operators to adjust the rate of the reaction and thus the rate of heat production. 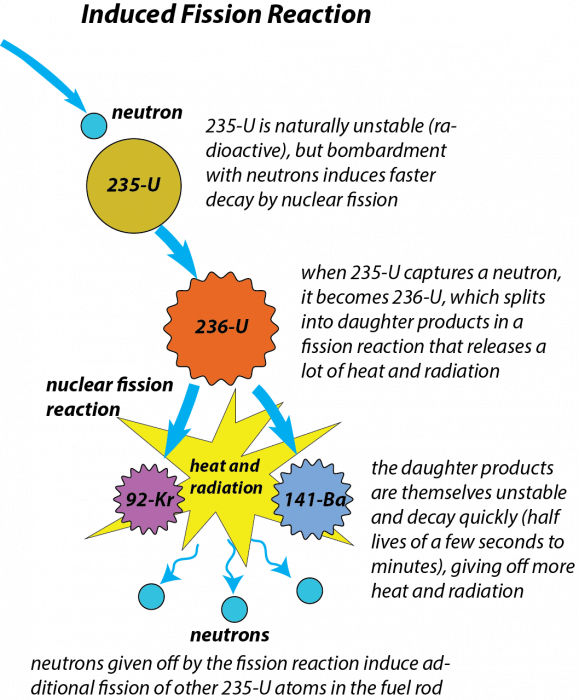 There are two basic types of nuclear power plants that are in operation today. The first, and most common, is the Pressurized Water Reactor (PWR), which is illustrated in the animation below. In a PWR, hot water passes through the reactor core (where it absorbs the heat from the nuclear fission reactions) and is then pumped through a heat exchanger, where it heats another fluid that produces steam, powering the turbine. The primary advantage to this type of design is that the water in the primary loop (which passes through the core) does not actually come into contact with the fluid in the steam generator, so unless pipes or valves break there is no risk of contamination or radioactive water leaking from the plant. The Boiling Water Reactor (BWR), illustrated in the next figure, utilizes a somewhat simpler design, where the water that runs through the core is allowed to vaporize to steam, thus powering the turbine to generate electricity. While the design is simpler, it does mean that the steam entering the turbine can be radioactive.

Whether one design is inherently more advantageous than another is difficult to say. Both types have been involved in major nuclear power plant incidents. The reactor at Three Mile Island was a PWR while the reactor at Fukushima was a BWR, so the potential exists for problems at either type of plant. It is perhaps worth mentioning that the Three Mile Island incident was likely due as much to human error and poor design of the reactor’s control system at least as much as to the reactor design itself. The reactor at Chernobyl was an unusual Soviet design called a “light water graphite reactor” that was not really designed for use as a commercial nuclear power plant but was adapted for that use anyway. The World Nuclear Association has a nice description of the Chernobyl plant technology with a description of what went wrong (here too, human error played a central role).

Advanced PWRs have been developed that use more passive designs to keep the reactor from overheating, without any pumps or offsite power required. Westinghouse has developed one such design, the AP1000, which is currently being deployed in China. For those who are interested, more information on passive PWR designs can be found at Westinghouse Nuclear.