Nuclear fuel rods typically last for 3-5 years, and when a rod is "spent" it still contains some fissionable 235-U along with a host of other radioactive elements.  So, what do we do with these spent rods? Many people would argue that recycling is a good thing. In the nuclear energy industry, recycling of spent nuclear fuel is a somewhat contentious topic. Many countries, including those European countries that still use nuclear energy, recycle spent fuel into new fuel for re-use. The United States does not do this, preferring a "once-through" fuel cycle for reasons of security as well as economics. Understanding the pros and cons of recycling nuclear fuel requires some understanding of how fuel for nuclear power plants is mined and fabricated. 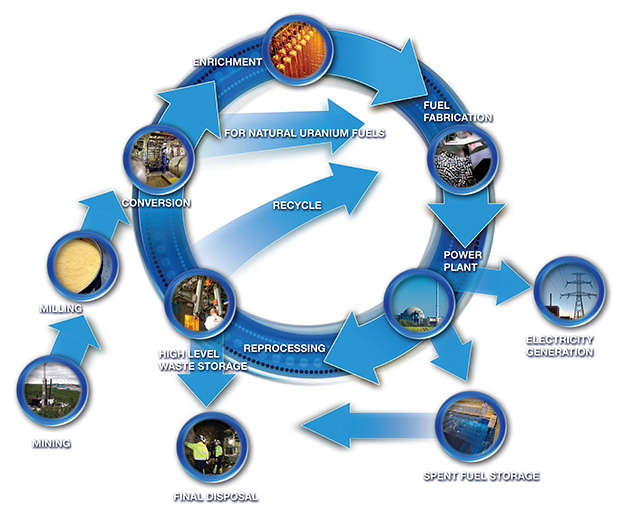 The figure above outlines the many steps necessary to get uranium out of the ground and into a nuclear power plant. After extraction and processing (“milling”), uranium ore is transported to conversion facilities to remove impurities. The next step in the nuclear fuel cycle is enrichment. Owing to security concerns, all enrichment for the US commercial nuclear industry takes place at one government-owned gas diffusion facility in Paducah, Kentucky. Enriched uranium is then transported to one of several commercial fuel fabrication facilities where the fuel rods are manufactured. In the U.S., fuel fabrication is a competitive industry; private firms compete to provide finished fuel to nuclear power plants. Nuclear fuel rods are generally not purchased directly from the government. Nuclear fission and disposal of spent fuel rods constitute the final steps of the nuclear fuel cycle in the US

The US is heavily dependent on the global market for uranium and nuclear fuel. n 2017, 90% of uranium oxide supplies used to develop nuclear fuel in the US come from outside of the country. The main suppliers for the US are Canada (24%), Kazahkstan (20%), Australia (18%), and  Russia (13%).  Proposals to open new uranium mines in both the western and eastern United States have been met with resistance, primarily on environmental grounds.

Current US policy prohibits the reprocessing of spent nuclear fuel, for two primary reasons. First is economics – the fuel costs for nuclear power plants are already among the lowest of any non-renewable power generation resource. Once nuclear power plants are built, if they are well-run they cost very little to operate. While the recycling of spent nuclear fuel would eliminate the need for virgin uranium ore to be mined or for additional fuel to be purchased on the world market, it is not at all clear whether the benefits of doing so outweigh the costs of reprocessing. The other reason is nuclear security. The process of recycling nuclear fuel involves the separation of uranium and plutonium from the spent fuel rods. There have been concerns regarding plutonium falling into the wrong hands and contributing to the proliferation of nuclear weapons.

One very serious concern with nuclear power has to do with the highly radioactive waste from the process.  Much of the waste needs to be isolated for at least 10,000 years. All civilian nuclear waste was intended to be stored permanently at a repository in Yucca Mountain, Nevada. Yucca Mountain was chosen as a waste repository site back in 1987 and we have spent over $15 billion investigating the site and developing 65 km of tunnels deep underground to store the waste.  Currently, it could hold 65,000 tons of waste, but we have 94,000 tons of radioactive waste in temporary storage at nuclear plants. The Yucca Mountain facility is not currently operational and significant uncertainties exist as to whether it will ever be used.  In the interim, spent nuclear waste will continue to be stored on-site at the power plants.

Climatewire and the New York Times recently published a nice piece that looks at both sides of the reprocessing debate.