“Everyone complains about the climate, but no one does anything about it.”

(adapted from a statement attributed to both Charles Warner and Mark Twain in various forms: “Everyone complains about the weather but no one does anything about it.”)

The challenge of responding to global climate change is sometimes described very aptly using a bathtub analogy shown below (there is also a really nice graphic and associated story at National Geographic. Note: You will need to register to see the graphic and story, but will have access to National Geographic in the future after you register.) Many greenhouse gases have such long residence times in the atmosphere, and the rate at which we pump the stuff into the air is so large, that the planet starts to look like a bathtub with a big faucet and a small drain. Eventually, the bathtub overflows. 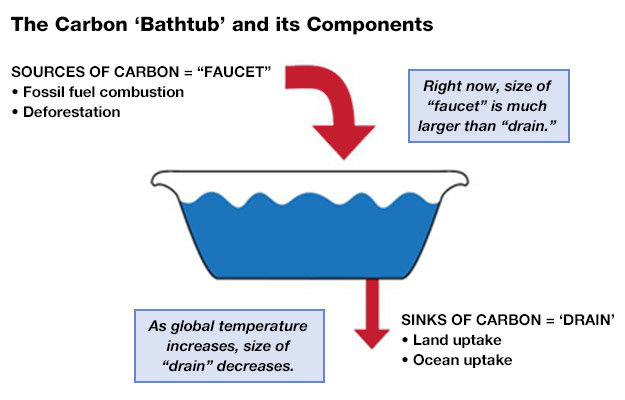 The Carbon Bathtub and its Components
Click link to expand for a text description of Carbon Bathtub figure
Carbon bathtub diagram. Sources of Carbon like deforestation and fossil fuel combustion act as a “faucet.” Sinks of Carbon like land uptake and ocean uptake act as a “drain”. It is important to note that as global temperatures increase, the size of the drain decreases. Currently the faucet is much larger than the drain.
Source: Causes of Climate Change: Climate Change: US EPA

If you look back on the previous several lessons, which covered various forms of low-carbon electricity supply and energy conservation, all of those options are basically attempts to reduce the size of the global carbon faucet. But if the bathtub is already overflowing then reducing the flow of water isn’t going to help all that much. Even if you shut the water off completely (in other words, even if we stopped burning all fossil fuels tomorrow), it will take a long time before the drain empties. So, reducing emissions of greenhouse gases now might help slow the pace of climate change, but it would take a long time before we could even try to determine whether such an action would have had any lasting impact.

Going back to our bathtub analogy, another alternative to keep the tub from overflowing would be to divert the water coming out of the faucet so that it never landed in the bathtub in the first place. Or we could start scooping water out of the tub as fast as possible. This is the idea behind “geoengineering,” or the deliberate manipulation of the planet’s environment (specifically, in our context, the planet’s atmosphere and subsurface). Geoengineering as an option to respond to climate change has aspects that are simultaneously enticing and frightening. On the one hand, if geoengineering options work as designed it would allow society (or give it an excuse) to continue to burn fossil fuels at a rapid rate with fewer implications for the climate. On the other hand, while many of the proposed geoengineering systems work in theory we have no idea if they will work in practice. Adding to the complication is the fact that geoengineering options are scientific innovations, but the decision to deploy them would be decidedly political.

Our discussion here will focus primarily on the different types of geoengineering options that have been proposed and those that have actually been tried on some scale. There are a number of very accessible resources for you to learn more, including:

There is currently no global political framework or treaty related to geoengineering in response to climate change, and as an option, it is discussed less often than technical options (like renewable energy) that seek to stem the inflow of greenhouse gases into the atmosphere. If you are interested in some of the political aspects of geoengineering, I’d refer you to this excellent article:

‹ Roadmap up The Geoengineering Taxonomy ›