We humans eat apples and eggplants, but we don’t eat their stems or leaves or roots. Bacteria in water are similarly picky. Even before a plant sinks all the way to the bottom of the ocean, bacteria and other living things are picking off the chemicals they like, either because those chemicals are easier to get or more useful to the bacteria, leaving other chemicals behind. This continues as the plants are buried. Some bacteria in low-oxygen but organic-rich mud make methane, CH4, the main ingredient in natural gas, as described in the Enrichment section More on Oxygen in Water. As more mud accumulates on top, deeper sediments are warmed by the heat of the Earth, “cooking” the dead plants. The result depends on how much cooking occurs, and what the plants were at the beginning.

“Woody” land plants—tree trunks, but also leaves, twigs, roots, etc.—become coal, which is mostly carbon. During the transformation from leaves and twigs to hard, shiny black coal, we change the name, first to peat, and then to coal of different types, lignite, then bituminous, then anthracite. You’ll generally find that as time, heat, and pressure change the organic materials, they also change the rest of the sediment around the coal. Peat occurs in sediments that are not yet hard enough to be called rock, lignite in soft sedimentary rocks, bituminous in harder ones, and anthracite in metamorphic rocks.

Oil is formed from “slimy” water plants (algae, plus things such as cyanobacteria that probably shouldn’t really be called plants, but we’re simplifying a little here). Because oil is primarily made of carbon (C) and hydrogen (H), we sometimes refer to it as a hydrocarbon. Methane is the simplest hydrocarbon, CH4, but oil contains a great range of larger hydrocarbon molecules, such as octane (C8H18). With too much heat, the oil breaks down to make methane. This gas is also produced as coal forms.

Coal, as a solid, mostly sits where it was formed. Eventually, if the rocks above it are eroded so that it is exposed at the Earth’s surface, the coal itself may be eroded away, and either “eaten” by bacteria, or buried in new rocks. And, occasionally, a natural forest fire or a lightning strike may set coal on fire. This burning usually isn’t really fast, because after the coal nearest the surface burns away, oxygen doesn’t get to deeper coal very easily. But, a lot of coal has avoided being eroded or burned, and is sitting in the rocks where it formed.

(Humans have also set coal on fire, releasing mercury and other toxic materials, and burning up a valuable resource. A few percent of China’s annual coal production may be burned in such fires, the town of Centralia in Pennsylvania was abandoned because of one such fire (see the figure below), and other impacts occur.) 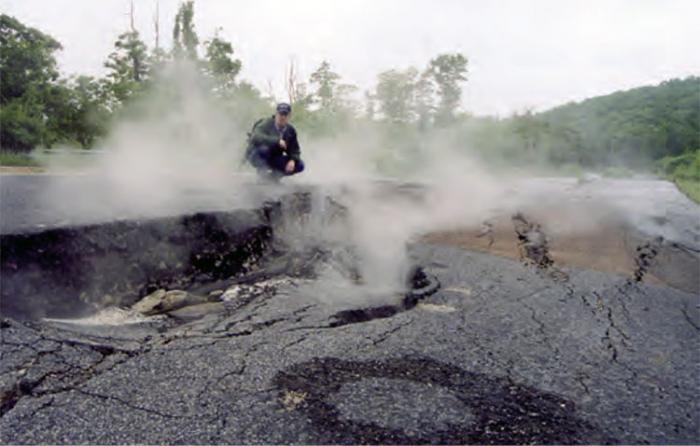 Gases reaching the Earth’s surface from the underground coal fire at Centralia, PA, USA, which has been burning since 1962. As miners removed coal from deep mines, pillars of the coal were left to hold up the rocks above. The fire has burned these pillars away, allowing collapses that have broken up the Earth’s surface, as shown here. This, plus the poisons in the gases, have caused almost all of the residents of the town to be relocated.
Source: Janet Stracher, from Kolker, A. et al., 2009, USGS, Emissions from coal fires and their impact on the environment, USGS Fact Sheet 2009-3084. 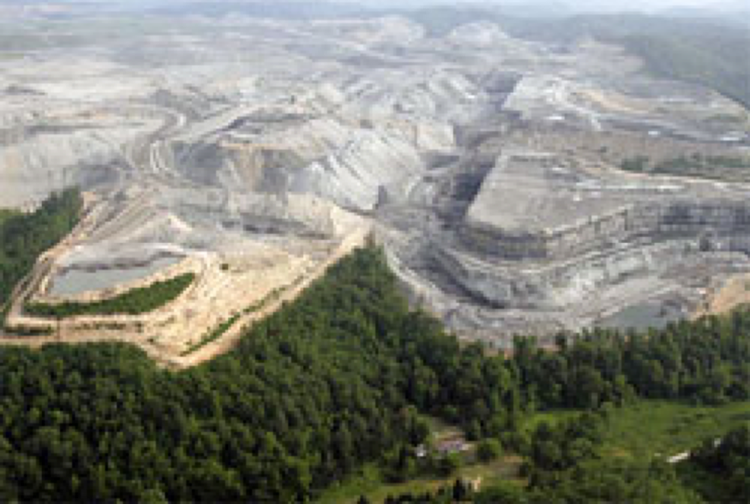 Mining coal involves either removing the rocks on top, or tunneling into the Earth along the coal layer. Removing the rocks on top of the coal, called “surface mining” or “strip mining”, requires putting those rocks on top of something else, breaking the coal loose with machines or explosives, hauling the coal away to be burned, and then either putting the rocks back on top or just leaving them. (We’ll revisit some of the implications of this later in the semester.) Digging along the coal is often called “deep mining”, and puts miners in a potentially dangerous place. For more information about mountain removal mining, visit the U.S. Environmental Protection Agency for some good resources, and watch the video at NASA's page on Moutaintop Removal.

When mud rocks (shale layers) are heated, the buried dead plants break down into the smaller molecules that make up oil and gas. Initially, these are trapped in the shale. However, because many small molecules take up more space than a few big ones, heating and cooking the rocks raises the pressure inside until the oil and gas seep out, often by cracking the rock. After some oil and gas escape, the pressure drops and the cracks close under the weight of rocks above. This may happen multiple times as more cooking occurs.

After oil and gas have escaped from the shale into sandstone or other rocks with bigger spaces, the oil and gas can move through those spaces. Most sediments are deposited under water, or the spaces in them fill up with water later. Natural gas is gaseous (no surprise there!), oil is liquid and floats on water, and so both tend to move upward through the water-filled spaces. The great majority of oil and gas eventually reach the Earth’s surface as oil or gas seeps. Before the industrial revolution, the amount of fossil fuel being formed, and the amount leaking out of seeps, were probably very similar (we’ll give some numbers soon).

However, recall that fluids have more difficulty moving through smaller spaces. If oil and gas are rising through spaces in rock, their motion may be blocked by another shale layer. Especially if the shale has been bent by movements in the Earth associated with mountain-building, so that the oil and gas rise into a “trap”, the fossil fuels may sit there for a long time (see the figure below). 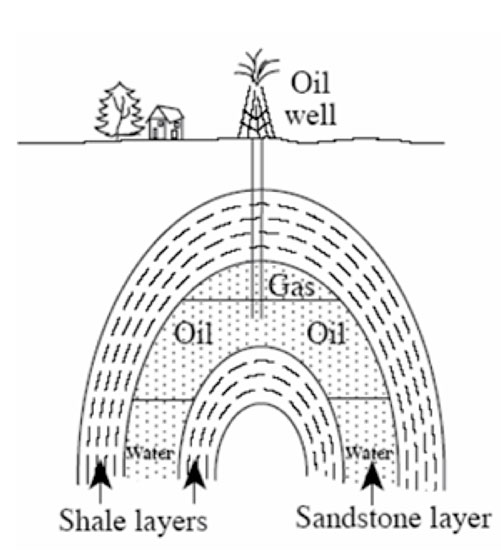 Gas and oil become trapped in the spaces in a sandstone layer if an impermeable shale layer lies above the sandstone along the “top” of a fold in the rocks.
Source: Penn State University, R.B. Alley, GEOSC 010, Geology of the National Parks
‹ Oxygen in Water up Exploration for Oil and Gas ›