To understand why energy conservation is even an option (let alone a necessary one), we have to go back to a simple fact about energy conversion: You want some, you waste some. Burning coal in a power plant or gasoline in a car; or heating water using solar energy – all of these things are “energy conversion processes.” We are taking energy that is in one form (like lumps of coal) and going through chemical, mechanical or other conversions to turn that energy into things that we want (like lighting and transportation). While these conversion processes have done great things for people and society, they aren’t perfect. The energy that goes into a conversion process is always greater than the energy that comes out of a conversion process. This is basically a consequence of the second law of thermodynamics, which says that it’s impossible to harness all energy in one form (like a lump of coal) to do useful work in another form (like light a room or make toast).

Technically, the second law of thermodynamics applies only to conversion processes involving heat – which basically describes the vast majority of the world’s energy technologies. These technologies burn fossil fuels in a generic process called a “heat engine.” Internal combustion engines in cars, industrial boilers, and power plants are all examples of the “heat engine” principle. In the 1800s a physicist named Sadi Carnot figured out that there was a theoretical limit to how efficient a heat engine could get, depending on the type of work it was asked to do and the conditions under which the heat engine operated.

Read this a short but nice article on Carnot below.

What Carnot figured out, in today’s terms, is that a heat engine dependent on steam (like a power plant) could not get much more efficient than about 50%. A heat engine that is driven directly by combustion gases, like a car or truck engine, cannot get much more than 25% efficient. This means that in the most perfect of all circumstances, it’s impossible for a simple power plant to waste less than about 50% of all the fuel that’s put into it. Cars are even worse – they are set to waste about 75% of all the fuel that we pump into them.

Of course, there are some clever ways that we can push the efficiency of energy conversion processes. Combined cycle power plants, for example, are able to capture some of the waste heat from combustion and use that heat to drive a second turbine for power generation. But even these types of plants generally don’t achieve efficiencies of more than about 65%. Wind and solar are “inefficient” as well – a wind turbine might capture about 50% of the potential energy in the wind that hits the turbine, and solar photovoltaic cells are generally able to capture only about 20% of the solar energy that hits their surfaces. (On the other hand, energy from the wind and the sun are free once the equipment is built and installed, so maybe the “efficiency” is not as important in the case of wind and solar.)

The tales of inefficiencies in modern energy systems are almost too numerous to count, and we haven’t even talked about the ways in which people choose to use energy. The graphic below provides a nice summary of how much energy is wasted in the United States. The figure is called a “Sankey diagram” and it traces the flows of energy (from left to right) through all sectors of a country’s economy. (The example in the graphic below was produced by a US government laboratory so it naturally focuses on the United States.) The left-hand side of the Sankey diagram shows all of the energy inputs to a nation’s economy and how much of each is used. The box for “petroleum” is larger than the box for “solar” because the US economy uses a lot more petroleum than it does solar energy. From each individual resource, you can trace the various paths showing how much of that energy resource is used in different sectors of the economy. For example, coal is used for power generation and is used directly in industrial and commercial boilers as well. As indicated by the width of the path, the vast majority of coal in the US economy is used for power generation. The quantities of coal used for industrial and commercial boilers are much smaller. All the way over at the right you can see two boxes – one is labeled “Energy services” and the other is labeled “Rejected Energy.” The Energy Services box tallies up all of the coal, oil, gas, solar and other resources that we actually harness for doing useful things. The Rejected Energy box measures how much of those resources is lost due to inefficiencies in our energy conversion systems.  As you can see, the US is now 32% efficient, and if we switched to an all-electric economic system with the highest efficiency generators, we could approach something closer to 50% efficiency. 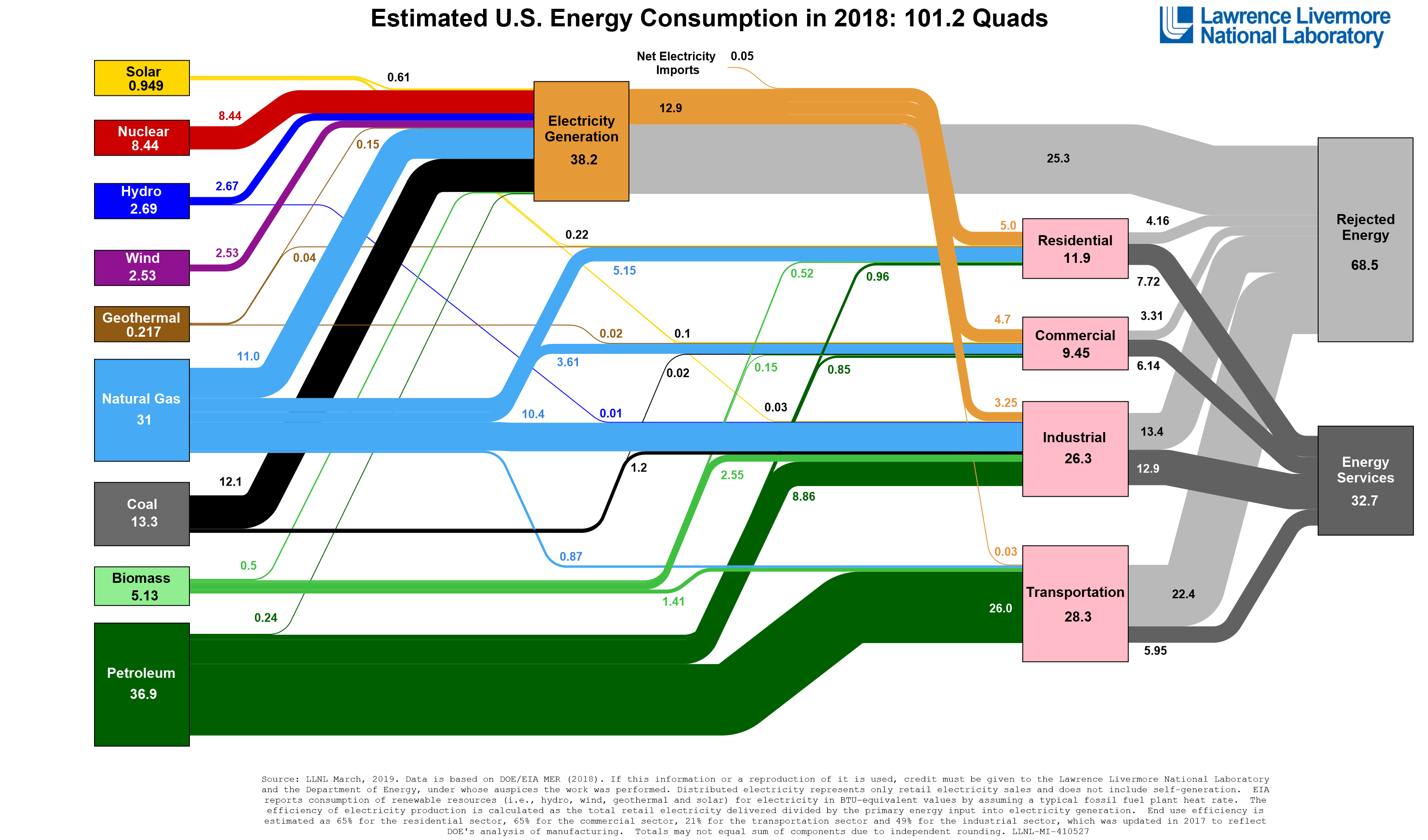 Sankey diagram of US energy flows for 2018. The units here are "Quads" or one quadrillion BTUs, which is an odd unit, but fortunately, 1 quad is almost the same as 1 Exajoule (EJ).  As usual, recall that for the world, we consume about 600 EJ per year.
Source: Lawrence Livermore National Laboratory

According to the Sankey diagram above, what are the two biggest sources of wasted energy in the U.S. economy?

Click for answer.
ANSWER: Electricity generation and transportation are the biggest sources of wasted energy in the US economy. Two out of every three units of fuel that goes into a power plant is wasted – literally nothing is done with it besides venting heat into the atmosphere. Transportation is even less efficient, nearly three-quarters of the energy input is wasted.
‹ Roadmap up Inefficient Use of Energy ›