Planetary manipulation by people is not a new idea – in fact, it’s one of the oldest ideas in the history of humanity. Agriculture, urbanization, exploration and pollution are all ways in which people have modified the earth’s environment to suit our needs. These activities are not really geoengineering as we have defined it, however, since any associated impacts on climate or the environment have been incidental – the original point of agriculture was not to change the climate of the planet, but to provide a reliable source of food.

Deliberate manipulation of the planet’s environment is also not entirely a new idea. By World War II in the 1940s, many countries had come to believe that they could gain some tactical advantage in warfare if only they could take actions affecting the weather. Cloud seeding (the deliberate addition of chemicals into clouds to make them produce rain), a schematic of which is shown in the figure below, was a tempting idea and was tried on some scale, although there is no clear evidence that it worked all that well. Cloud seeding has also been used in attempts to weaken hurricanes, also without much evidence of success. The basic science behind cloud seeding, however, appears to be solid and the practice is employed around the world today to make rain in arid regions. Somewhat famously, China is reported to have utilized cloud seeding to prevent rain from falling during the 2008 Summer Olympic games. 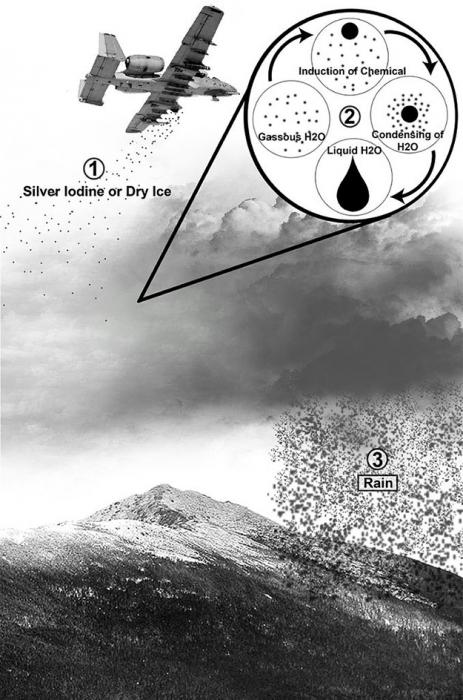 In the context of options to tackle climate change, geoengineering is not a single strategy but rather encompasses a variety of different technology options that, if all were to go according to design, would cool the planet or divert greenhouse gas emissions away from the atmosphere through different mechanisms. These options vary primarily in the natural or engineered systems that are targeted for alteration; and whether they aim to change the climate based on reducing the amount of radiation that is trapped within the earth’s atmosphere or by manipulating earth systems to affect how the earth responds to those increased levels of radiation. The majority of geoengineering proposals are of the first type – in fact, most of the proposals of the second type are fairly speculative and difficult to envision working at any large scale. A visualization of this taxonomy is shown in the figure below, based in part on a survey by David Keith of Harvard University (“Geoengineering the Climate: History and Prospect, Annual Reviews of Energy and the Environment, vol. 25 (2000), pp. 245-284). 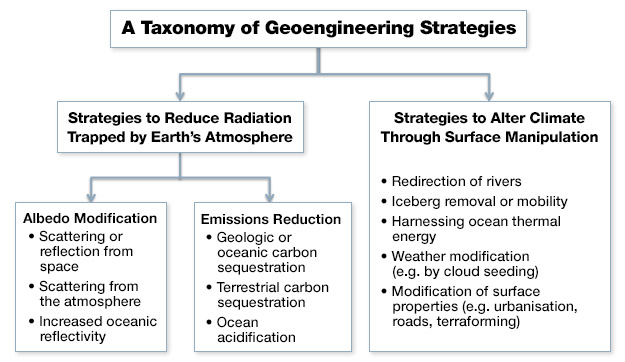 This is a flow chart of "A Taxonomy of Geoengineering Strategies" presented as a nested list.

Note the differences between the options for greenhouse gas reduction that we have discussed so far in this section of the course, and the different proposed geoengineering strategies. The technology options that we have discussed thus far are really about substituting other energy resources for fossil fuel consumption. There is no mention or even allusion in the taxonomy figure above to weaning ourselves off fossil fuels. This is not to say that the two sets of strategies are completely independent – for example, one way to reduce emissions would be to stop using fossil fuels and use other energy resources instead, but since that does not really fall under geoengineering per se, we don’t include that strategy in our geoengineering taxonomy. Similarly, if we stopped mining coal (just to give one example), then in some areas of the world we would wind up cutting down fewer trees, which would increase the amount of terrestrial carbon sequestration that we could pursue, since the trees that we didn’t cut down could soak up more CO2 from the atmosphere.

‹ The Carbon Bathtub up Albedo Modification within the Earth’s Atmosphere ›