The Formation and Future of Fossil Fuels

What the Frack? The Formation and Future of Fossil Fuels

Older residents of the US may recall a television comedy that ran during the years 1962-1971, and much longer in reruns, concerned with the energy system. The show, called The Beverly Hillbillies, was the story of a “man named Jed” from the mountains, who became rich when his hunting bullet struck oil.

The idea was already rather unlikely in the 1960s, but not yet absurd. Before our modern oil industry was developed, oil did seep to the surface at many places around the world. For example, the ice-age bones of saber-toothed cats, mammoths and other creatures of the La Brea Tar Pits of southern California are stuck in the sticky left-overs from oil seeps, after the more-liquid parts evaporated or were “eaten” by microbes (see figure below). 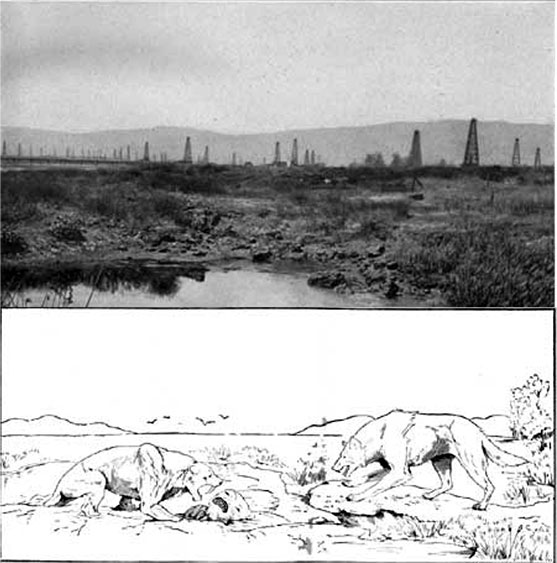 Historical photo of the tar pits at La Brea, in western Los Angeles, California. The tar pits formed from seeping oil before the oil wells were drilled. Many animals were trapped in the sticky tar in the past, and their bones have been studied, yielding reconstructions such as this one showing a restoration of saber-toothed tiger, sloth, and dire wolf at La Brea, Calif. By E. Christman.
Source: USGS Geological Survey Bulletin 845 Guidebook of the Western United States: Part F. Southern Pacific Lines, Sheet 48, Figure 69

The first modern oil well, the Drake Well in western Pennsylvania, was drilled in 1859 at the site of natural oil seeps. Native people had used the oil, and Europeans were using it in medicine and in lamps.

For more about oil and gas seeps, including dice for games, and weapons, made by native people from “tar” or asphaltum at oil seeps, see USGS.

Throughout history, people had relied on springs that produce water, and for millennia had drilled or dug down to get more water. People had even occasionally gotten oil and gas from their water wells, so it is not surprising that someone (Edwin Drake) decided to drill at one of the many natural oil seeps to get more oil (see figure below). 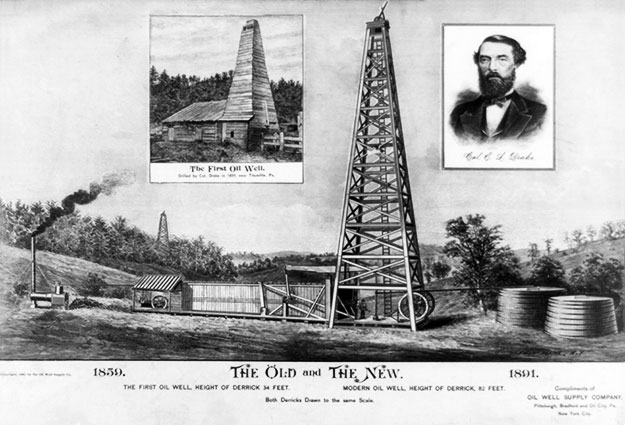 An old print, probably 1891, showing a modern oil well for that time, in comparison to the original Drake Well from 1859, and a picture of Colonel Drake.
Source: The Library of Congress, "The old and the new, the first oil well..., modern oil well..." c1891.

Natural oil seeps still exist, but most are long-gone, except in the most remote places including far down on special parts of the sea floor. Huge numbers of oil and gas wells since the Drake Well—maybe more than a million—have rapidly pumped out the oil that would have seeped slowly to the surface over millennia and longer. The idea of a modern mountaineer hitting a huge new oil field with a stray bullet really is absurd.

‹ Roadmap up Origins of Oil, Coal and Gas ›