In addition to being free as a source of energy (it does cost money to harness it and turn it into electricity), energy from the sun is practically limitless. The surface of the Earth receives solar energy at an average of 343 W/m2. If we multiply this times the surface area of the Earth, about 5x1014 m2, we get 1715x1014 W. But, 30% of this is reflected, and only 30% of the Earth is above sea level, so the usable solar energy we receive on the land surface is about 360x1014 W. We need to reduce this further because not all of the land surface is suited to installation of solar PV panels — we don't want to cut down forests, and ice-covered areas are not suitable, so we reduce the area by about one half. Over the course of a year, this amount of solar energy adds up to 66x1022 Joules. In 2018, we used about 600x1018 Joules of energy, which is just a shade less than 0.1% of the harvestable solar energy we receive on the land. This means that even if we got all of our energy from the Sun, we would not make a dent in the total! The potential is vast — 10,000 times what we need!

Let’s consider what it would mean for us to get all of our energy from Solar PV — how much of the Earth’s surface would we need to cover with panels? The black dots (radii of 100 km) in the figure below represent areas that could generate enough energy from sunlight to completely power the planet for an entire year. Practically, there are barriers to running the planet entirely on sunlight (everything would need to be electrified, we would need very large quantities of battery energy storage, and so forth), but the dots are useful as a demonstration of just how vast the energy production potential from solar is. 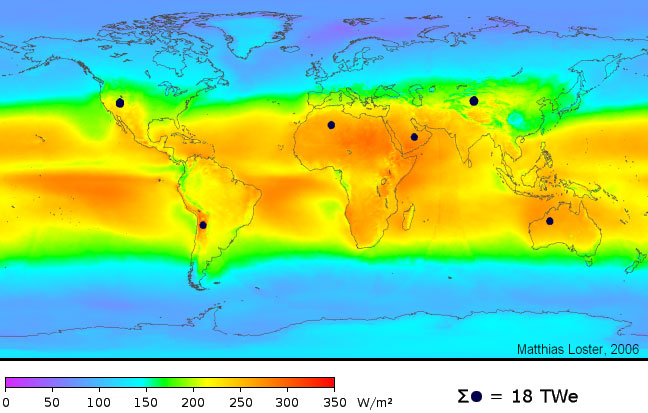 Global average solar irradiance. Areas in red have a higher-strength solar energy resource on average. The black dots indicate areas with sufficient solar energy potential to supply the entire world’s energy demands.
Source: Total Primary Energy Supply
Optional: If you are interested in a more detailed view of solar energy resources in your area, a company called Vaisala 3Tier produces maps that you can download for your own personal (non-commercial) use.
Click here for an audio and a written description of the Global average solar irradiance image.

One of the important differences between Solar PV and CSP is that CSP requires more intense sunlight, and as such, it is not a viable option in many places. In contrast, Solar PV works just about everywhere — it is more versatile. Another important difference is in scale — CSP is really suited to utility-scale power plants, whereas Solar PV works at both the utility-scale and the very small scale.

The map below shows the PV potential for the world. The variability in the map is mainly a function of cloudiness and latitude. Many of the big, utility-scale solar PV plants are located in the red areas, but there is a surprising amount of Solar PV energy being harvested in places like Germany and Japan, both of which are fairly cloudy. But, even in a fairly cloudy place like Pennsylvania, you can see from the map that we could expect about 1460 kWh per year from a 1 kW PV array. From this, you can calculate how many square meters of PV panels you’d need to provide the electricity for a house that uses the typical 10,800 kWh per year. If you divide 10,800 kWh by 1460, you see that you’d need about 7kW of solar panels, which would fit on a typical house roof. The main point here is that Solar PV is a viable energy source in most parts of the world where people are living. In contrast to Solar PV, energy from CSP is only viable in places where the daily totals in the map above are higher than 6 kWh/day. Nevertheless, there are many regions where CSP viability and human population coincide, so it too can be an important energy resource in the future. 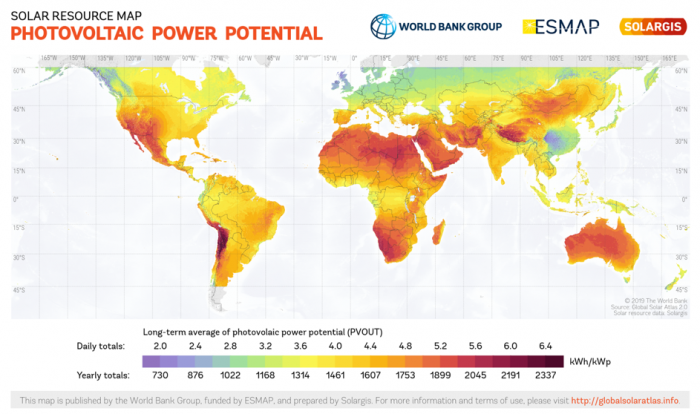 This world map from the World Bank Group’s Global Solar Atlas shows the estimated potential for Solar PV energy in terms of kWh energy produced from a solar PV array of 1 kW. It is important to understand that daily totals are an average value — the output each day will vary according to how cloudy it is and how high in the sky the Sun is. The yearly totals are just the daily total times 365.
Credit:Global Solar Atlas

For students living in the United States: According to the map above, do you live in an area that can support PV generation? What about CSP? Do you know anyone who generates solar power at home?

ANSWER: Answers will vary depending on where you live. Most of the western, central, and southern states have enough power production potential to make PV a viable option. The potential for CSP production is limited to a few states in the southwest, primarily Arizona and New Mexico, plus parts of southern California and Nevada. Here in central Pennsylvania, we barely have enough production potential to make PV a good investment, and there is nowhere near enough potential for CSP to make it a viable option.
‹ Concentrating Solar Power up The Changing Economics of Solar Energy ›