The Canary Islands are a group of seven volcanic islands that lie 100 kilometers off the coast of Africa. These islands grew over a hotspot as in the Hawaiian islands and all but one has active volcanoes. The coastlines of the Canaries are characterized by massive, steep cliffs and there has long been speculation that these features formed by dramatic collapse. What makes this possibility super significant is the fact that this process could trigger massive tsunamis that could hit the coasts of Europe, the eastern seaboard of the US, and Antarctica. In fact, speculation is that giant blocks of limestone that weigh hundreds of tons meters above sea level in the Bahamas were delivered there by a megatsunami and the Canary Island landslides are a possible culprit. And more locally, tsunami deposits found in the Canary island suggest waves in the past over 150 meters high!

Cumbre Vieja is the main volcano on the island of La Palma and has erupted recently causing large cracks to grow involving the significant motion of the western volcano flank. This has caused speculation that this flank could collapse. The flank has a volume of 1.5 trillion metric tons and models suggest that if it were to collapse it would generate a tsunami 1000 m high that would be 50 m when it arrived in Europe and along the eastern coast of the US. Because this scenario would be devastating to cities including New York, Boston, and Miami as well as coastal real estate in New Jersey, North and South Carolina, and Florida, it has been rigorously investigated by scientists. 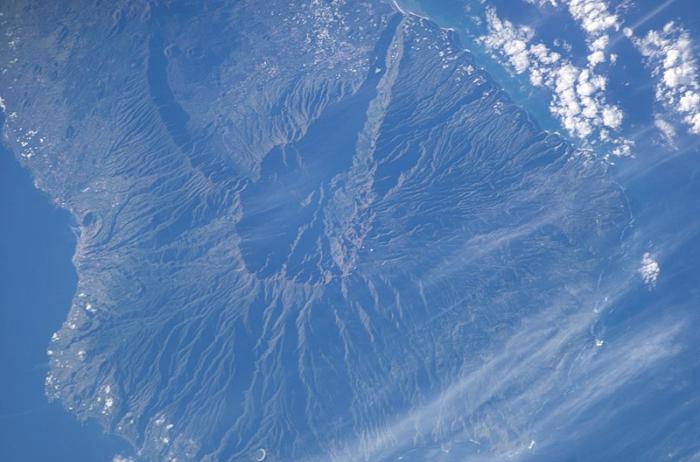 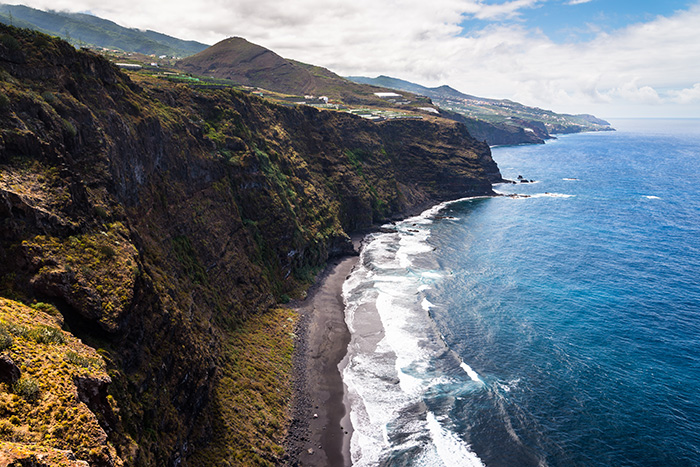 Steep cliffs on the coast of La Palma. Note: these are not cliffs that are predicted to fail
Credit: SpaceKris via Shutterstock

Click here for a transcript of the Megatsunami Scenario - La Palma Landslide video.

Man narrating: A slide from this mountain could kill millions of people in Europe and along America's eastern seaboard. Some eminent scientists warn that it's purely a matter of time till it happens. This is the volcanic island of La Palma 700 miles off the northwest coast of Africa. It's a newborn baby island, barely past its 4 millionth birthday, created in the last stage of what geologists call the rock cycle. Volcanoes can form land in various ways. In Hawaii lava gently pours from vents in the ground to build up almost horizontal layers of new rock. But elsewhere, as here on La Palma, more violent eruptions build steep-sided cones with surrounding layers of thick ash.

Eruptions in the past 60 years have jolted this island to the core, creating a fault line - a crack you can walk through - along the island central spine 6,000 feet above the Atlantic Ocean. On the western side of the fault, the land fell 13 feet down then stopped. Geologists Bill McGuire and other scientists say gas pressures could build up in a future eruption and crack open the island along this fault line. They have traced the fault for at least nine miles along the island ridge. And they believe the fault is so long that when it cracks open five hundred billion tons of rock will slide thousands of feet down into the ocean.

Narrator: McGuire paints a terrifying fantasy picture of what anyone standing on the top of the landslide would see and hear.

Prof. Bill McGuire: I don't know if anybody's heard the noise made by this amount of rocks sliding against another great chunk of rock, but I always imagined it as if there are a million fingers scraping down a blackboard.

Narrator: The slide will reach a speed of more than 220 miles per hour

Prof. Bill McGuire: So you'd be hurtling down the slope of the volcano. It would start to break up into smaller pieces as it entered the ocean but by then it would already have displaced something like half a mile of water, which would be towering above your head. And that would be probably the last thing you'd ever see. Spectacular way to die.

Narrator: McGuire believes the impact with the ocean will create a dome of water nearly 3,000 feet high.

Prof. Bill McGuire: This is a massive rock which is probably bigger than Manhattan Island and when it collapses it would generate oceanwide tsunami, which will be at least as devastating as those that struck the Indian Ocean.

Narrator: The vast amount of energy pumped into the ocean will create what one scientist has called a megatsunami. Tsunami waves racing out in all directions. Computer predictions suggests they could even travel 4,000 miles toward the eastern seaboard of the United States, losing some but not all of their power along the way.

Prof. Bill McGuire: That wave will travel all the way across the Atlantic Ocean to the east coast of North America, but the water itself won't move all the way across, the individual particles in the world would transmit the energy to one another. We can demonstrate that quite nicely on a pool table here, where the energy from this first ball I'm going to hit is transmitted through all the others to the last one.

Narrator: Just as energy moves from ball to ball, so the landslide energy transfers from water particle to water particle across the ocean. As the landslide's energy approaches the coast, it builds up into a massive wall of water. These deep reds and blues are computer predictions of waves 100 feet high and more.

Prof. Bill McGuire: The level of destruction is difficult to quantify, it is going to be enormous there's no doubt about that. If people are still in the cities when the collapse occurs, you may be considering millions of casualties.

The hypothesis that Canary Island collapse generates megatsunami is not universally accepted. This skepticism arises from the fact that island collapse may not have been catastrophic, instead, occurring slowly in numerous discrete small events rather than a single giant collapse. Such a slow collapse would not generate a large tsunami. So what about the large Bahamian blocks? An alternative possibility is they were delivered there by a hurricane during a time 125,000 years ago when sea level was higher than it is today.

In summary, it does not appear that a devastating megatsunami generated in the Canary islands is imminent. There is potential for collapse of the volcanic flanks on the islands but these events will likely be less dramatic than once feared and with waves only devastating on a local scale.

‹ Krakatoa 1883: West of Java! up Investigating The Geology & Impacts of Recent Tsunamis ›