One of the first disaster movies ever made was about the giant tsunami of 1883 that was triggered during a massive eruption of the giant volcano, Krakatoa, about 20 miles (32 kilometers) from the islands of Java and Sumatra. The movie included a group of thieves and a group of good guys. They are on Java getting ready to set sail to look for lost treasure. They see the volcanic eruption in the distance, feel the ground shake and the ocean recede and know that a tsunami is coming. They have a decision to make: stay on land and get to high ground, or escape on a boat and ride the wave out at sea. So the good guys get in the boat and the bad guys run for higher ground. The boat gets out to sea, where it is rocked by giant waves but barely survives. The bad guys climb trees and are swept away by the waves. Justice is served! The movie ends. 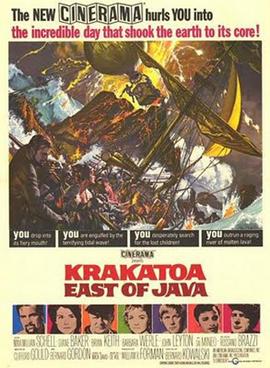 Think about how inaccurate this storyline is for a minute. While the characters would have felt the earthquakes and, the tsunami would have arrived in about THREE minutes (at 800 km/hour). So there would have been almost no time to stand around and make that fateful decision, and certainly not enough time to steer the ship out into open waters. And finally, the movie is infamous because Krakatoa is actually WEST of Java!

Krakatoa is a massive stratovolcano that lies between the islands of Java and Sumatra in the Sunda straits. The volcano is still active today (it has erupted in 2020) and rises out of the ocean with numerous small island cones. The 1883 eruption was by far the largest in its history and basically blew up the majority of the volcano. Eruptions began on May 20 of that year as documented by historic records and these led up to the massive eruption that began on August 25 and lasted for two days. That eruption is what is known as a culminating eruption where much of the volcano literally blows up, and, in the case of Krakatoa, all that was left was one flank of the volcano and a couple of small cones in its center. The sheer power of the eruption was caused by what is known as phreatic activity. Because the volcano was right next to the ocean, seawater seeped into the plumbing system, and, when heated, became steam.

The eruption was so powerful it was heard in Perth in Australia more than 3000 km away and may have been the loudest sound heard in historic times. Ash from the eruption stayed elevated for months and caused spectacular sunsets around the world in places as far away as New York and Norway. The famous painting The Scream by Edvard Munch is thought to depict one of these dramatic sunsets. The global temperature dropped by 0.4 deg C in the year after the eruption as a direct result of the emission of sulfur dioxide that blocked out solar radiation. Record rainfall occurred in California. 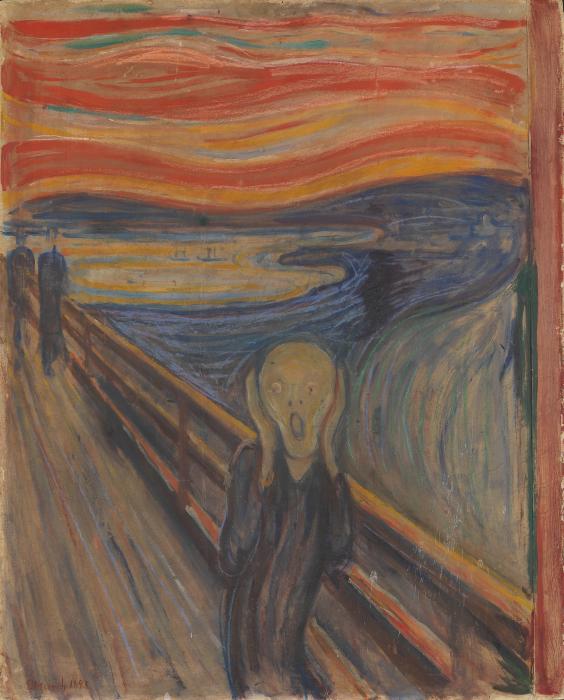 The blood-red sky shown in Edvard Munch's famous 1893 painting The Scream depicts the color of the sky over Norway after the eruption.
Credit: The Scream by Edvard Munch via Wikimedia Commons (Public Domain)

When Krakatoa erupted it generated a massive column of ash, pumice, and gas that extended up to 27 km above the volcano. The collapse of these columns displaced several cubic kilometers of seawater and this is thought to have been the trigger for the massive tsunami that caused so much destruction. Waves up to 46 meters high (120 feet) crashed onto coastal villages in Java and Sumatra and killed up to 36,000 people. The coastal areas are very flat, there was little warning (sorry Hollywood!) and nowhere to escape.

The collapse of the column spread a massive cloud of hot ash and poisonous gas called a pyroclastic cloud or surge that basically burned and asphyxiated anyone in its path and caused at least 4000 fatalities on the islands of Sumatra and Selebesi. Large pieces of pumice landed around the region. There are reports of corpses washing up on volcanic pumice in Africa in the months after the eruption.

Sadly the 1883 eruption was not the last time eruption of Krakatoa caused massive fatalities. The Anak Krakatoa volcano violently erupted in December 2018 and triggered a tsunami that led to over 400 deaths and over 800 injuries on Java and Sumatra. 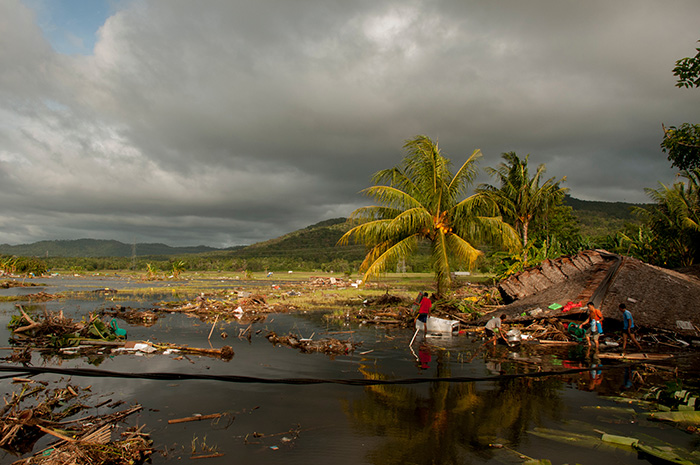 Krakatoa East of Java was made in 1969, the first of many super wildly inaccurate disaster movies. In “Earthquake” giant cracks opened in the ground in Los Angeles and swallowed people whole (including the bad guys!). Still worse, in “Volcano”, an eruption takes place in Los Angeles (there are no volcanoes even close to the city!). “Dante’s Peak” did a little bit better, at least it took place in a region where there are volcanoes, but imagine making a truck to be lava resistant so that the family pet can make his last-minute escape! And this is without the wildly inaccurate storm movies!

The 1883 Eruption of Krakatoa shows the devastation that a volcanic tsunami can cause. It was not nearly the largest eruption in the region, however. The eruption of Toba 75,000 years ago was many orders of magnitude more powerful and is thought to have caused more than 3 degrees of global cooling that lasted a number of years. Thick ash from this eruption is found all over the Indian Ocean and a thin layer is found in Greenland ice cores. The Toba eruption must have generated a truly monstrous tsunami!