Perhaps Hurricane Katrina can now be viewed as the precursor to many similar events to come. In 2005, Katrina was the deadliest and costliest storm to make landfall in the United States in 100 years. It impacted coastal communities in five Gulf Coast states: Florida, Alabama, Mississippi, Louisiana, and Texas. The greatest impacts were felt in Louisiana and Mississippi, while the greatest media attention focused on New Orleans. Katrina’s death toll was approximately 1,500 in Louisiana alone. The economic impacts were complex and enormous. If measured by insurance claims alone, the disaster generated more than 1.7 million claims across six states, to a total of more than $40 billion. Estimates of the overall economic impact of the storm in the Gulf states put the damage at approximately $200 billion.

The New Orleans economy is based in three main sectors: tourism, port operations, and educational services (Monthly Labor Review, 2007). All these sectors were essentially shut down after the storm for several months, and up to years in some cases. Many operations did not fully recover until a full year after the storm. The University of New Orleans and all other schools were closed except for online learning for the fall semester or longer. The Port of New Orleans is essential to the nation, as the Port of South Louisiana (of which New Orleans port is a component) handles the most bulk tonnage in the world. About 5,000 ships from nearly 60 countries dock at the Port of New Orleans each year (Monthly Labor Review, 2007). The tourism service industry, for which New Orleans is best known, is the major employer in the city and, of course, that was also shut down for many months after Katrina. So, as well as being displaced, many New Orleans residents lost their source of income until the city could recover sufficiently, which took years.

These examples do not tell the whole story of a complex natural disaster such as Hurricane Katrina. Some have described it as a man-made disaster because of the failure of the flood control system surrounding the city of New Orleans, much of which sits at below sea level elevations. Meanwhile, a short distance away, unprotected coastal communities on the Louisiana and Mississippi coasts were also devastated. Some areas were never rebuilt, but most have been rebuilt, and this rebuilding has been a complex process driven by economics. It has been a process driven by individuals’ economic resources; insurance payments; many federally funded programs such as the Road Home Program; and through the migration to the area by people and companies willing to invest in rebuilding.

View the following image: a summary of the changes in population in the Greater New Orleans area in the eight years following Hurricane Katrina from The Times-Picayune. 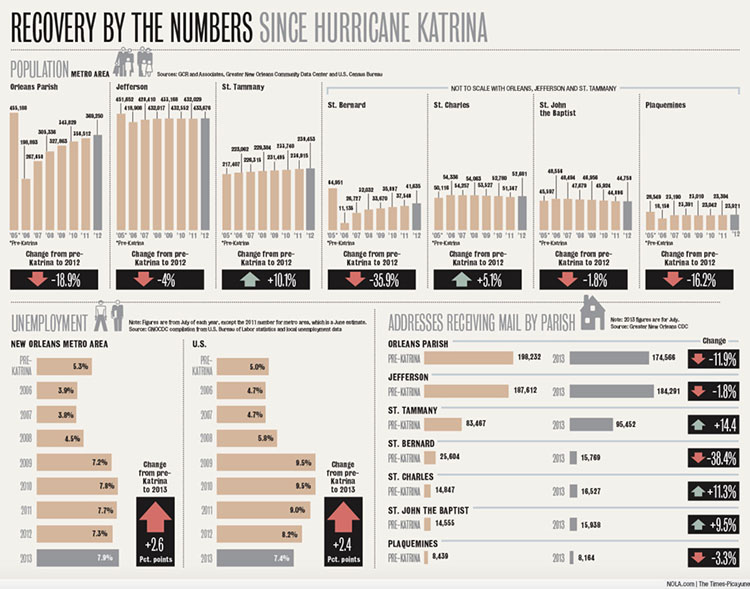 The recovery process has provided many lessons to be learned and these have informed recovery in the wake of the storms that have followed, including Hurricane Sandy.

The fact that the recovery process after a major disaster is a complex and long process is underscored by the article in the required reading for this Module, in which the author cites a number of people who all give a different answer when asked to say how well New Orleans was doing with its recovery in 2014.

Read "How to Tell When New Orleans Has Recovered From Katrina" linked from the Goals and Objectives - Module 6 Roadmap.

What long-term effects did Hurricane Katrina have, and are the affected communities more resilient now than in pre-Katrina times? This question is very hard to answer briefly, and much has been written on the topic. In short, because 80% of the city flooded, and the entire population had to evacuate, recovery began slowly. Today, New Orleans is a smaller city than it was in 2004, but it has experienced a fairly healthy economic recovery. The flood defenses were rebuilt and improved to the tune of $14 billion. Many residents never returned, often because of difficult economic decisions that had to be made. Many people moved to the city for a variety of reasons after the storm, and some stayed and made it their long-term home. These changes affected the demographics of the city. Important questions still linger about the long-term resilience and sustainability of New Orleans. Looking forward, New Orleans is working hard to improve its resilience. 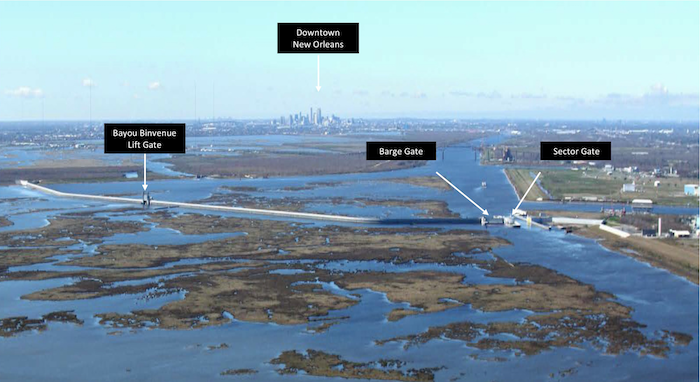 Figure 6.6: A view from the east of New Orleans, of the Lake Borgne Surge Barrier, which was built after Hurricane Katrina to protect the city from storm surges.
Credit: Flood Protection Authority – East

A great deal of work has gone into planning for the future of New Orleans since Katrina. New Orleans is a member of 100 Resilient Cities, an initiative of the Rockefeller Foundation, which is dedicated to helping cities around the world become more resilient to the physical, social, and economic challenges that are a growing part of the 21st century. The initiative addresses a broad spectrum of challenges, not just those facing coastal cities like New Orleans, but it aims to strengthen the fabric of a city so that it is more likely to weather the shocks such as catastrophes like Katrina, as well as the more everyday stresses that affect life in a community.

At the 10th anniversary of Hurricane Katrina in 2015, the city released its new resilience plan.

To summarize, the resilience plan aims to address three “visions”:

The details of this plan are found at: Resilient New Orleans - Strategic actions to shape our future city. The section beginning on Page 30 of the document, Vision 1.: Adapting to environmental change, which is driven by climate change. Here the initiatives outlined for addressing environmental change are: Advance coastal protection and restoration; Invest in comprehensive and innovative urban water management; Incentivize property owners to invest in risk reduction; create a culture of environmental awareness at every stage of life; Commit to mitigating our climate impact. Please take a few minutes to look over these pages to appreciate the extent of the challenge and depth of the depth of commitment by New Orleans to meet the challenges.

This short (3:00) video summarizes some of the visions of this plan.

Resilient New Orleans: What will the future hold for Marcel?
Click for video transcript.

Resilient New Orleans: What will the future hold for Marcel?

Corrine and Edgar were born and raised in New Orleans, a city nearly 300 years old. Like many before them, they faced challenges, but persevered. If we make the right decisions today, their son, Marcel, will grow up in a New Orleans different than the one they knew. His life will be marked by a different set of challenges for the future. Growing with Marcel will be a city built to last, one protected by a newly completed surge barrier almost two miles in length, 26 feet high, and more than 200 feet deep. Marcel may know it as a great fishing spot, but this engineering marvel, as well as coastal restoration efforts outside the levees, and innovative ways to live with water inside the levees, together help keep his city safe. When storm clouds form on the horizon, an early warning system will provide real-time updates, so Marcel and other families can prepare for a coming storm. And thanks to new building codes, and our living with water approach, residential and commercial buildings are safer, more resilient, and structurally sound. Building a resilient City is more than prepping for man-made and natural disasters. It's about making the fabric of this city stronger, too. As Marcel grows, he'll benefit from innovations in public education that excel in science, technology, engineering, and math and integrate resilience and environmental awareness into the curriculum. These schools not only put Marcel on the pathway to higher education and success. They also ensure that New Orleans becomes an engine for business investment that connects its residents to good job opportunities, things that are vital to the health of our economy. As an adult, Marcel might commute to work on a modern, efficient street car, passing revitalize neighborhoods in sync with the rhythms of success. He'll work in a New Orleans that promotes businesses large and small. Through economic development initiatives, we'll spur growth in bio innovation and the health services sector and the water economy. With Marcel's job in the fast-growing water management industry, New Orleans will embrace water to achieve improved safety economic growth and quality of life. Today, we are at a crossroads. The decisions we make today will determine the next 300 years and the future viability of New Orleans. Together, we can steward the next evolution of this unique and dynamic city, so Marcel his family and all New Orleanians can embrace the future while celebrating their roots.