If you have not already read the futuristic scenario created by Jeff Goodell in his book “The Water Will Come”, and watched the short video (6:29) from The Atlantic “Is Miami Beach Doomed?”, please do so now so you have these two contrasting perspectives about Miami in your mind.

Even if they have never been to Miami Beach, most people know the city as a place where the wealthy go to enjoy the tropical climate and the beauty of the Atlantic shoreline. They may be completely unaware of the challenges that are connected to the geology of the area and rising seas. Jeff Goodell’s dystopic vision of the future for Miami is in contrast to the optimistic “can do” attitude of the mayor of Miami Beach and those around him, who have great faith in human ingenuity and engineering to find solutions to the coastal flooding issues, which are a growing part of daily life in Miami Beach. As you watch the video and read the article, ask questions about the future of Miami and Miami Beach.

How sustainable is the economic powerhouse of Miami Beach? What future lies ahead, and for how long can business as usual be maintained?

Let’s consider some of the reasons behind the sunny day flooding and king tides that are disrupting the utopic life there. First, of course, is sea level rise. We learned in Module 4 that parts of the east coast of the U.S. are suffering from greater rates of sea level rise than most places. And Miami is one of these locations. Research has shown that in addition to eustatic sea level rise, there is a combination of other factors contributing to sea level rise along the southeastern coast of the U.S.

Then, there are king tides, which occur seasonally, during the fall and early winter. King tides are a natural phenomenon determined by the predictable movements of the Earth, Moon, and Sun, but exacerbated by local weather patterns and regional ocean conditions. King tides occur when the Earth, Moon, and Sun are aligned at perigee (Moon is closest to the Earth) and perihelion (Earth is closes to the Sun).  These conditions result in the largest tidal range seen over the course of a year.

These factors, combined with a unique set of regional geological characteristics, make south Florida a highly sea level challenged part of the U.S.

What is unique about the geomorphology of this part of Florida that makes it more susceptible to sea level rise related issues? The Florida peninsula is composed of a limestone platform and the barrier shoreline that Miami beach occupies sits upon this platform. This makes it a little different geologically than the Outer Banks barrier islands, for example, which do not have a solid bedrock core, and continually migrate. The Florida peninsula is low in elevation and Miami beach has a maximum elevation of only a little over 1.5 m. The lowest elevations are on the bay side of Miami Beach. This is the area discussed in the video. You can explore the effects of sea level rise on Miami Beach at the NOAA Sea Level Rise Viewer, or the Citizen eyes site a citizen science site designed to increase flooding awareness among citizens, both of which allow you to search for a location and manipulate projected sea levels and visualize the effects on the chosen location.

In addition, the geology presents another challenge: the limestone platform is highly porous, so sea water can infiltrate beneath the ground and come up from below during high tides. Furthermore, the design of the older drainage systems that rely on gravity flow to the ocean has resulted in sea water backing up onto roadways during high tides. This adds to the effects of “sunny day flooding” which Miami is becoming accustomed to.

As the mayor of Miami beach describes in the video, the drainage systems are being redesigned with pumps to return the water to the ocean. This idea is illustrated well in the website.

Of course, the flooding experienced today in Miami is just the beginning, given the sea level rise projections we have already discussed. In the video, the mayor and city manager of Miami Beach both sound optimistic and are pushing forward with innovative ideas, such as installation of pumps, raising road levels, etc. But on the other hand, Jeff Goodell’s scenario paints a different picture of the future of Miami. These materials provide us with food for thought, which can be applied in the graded Module 6 Discussion Forum. 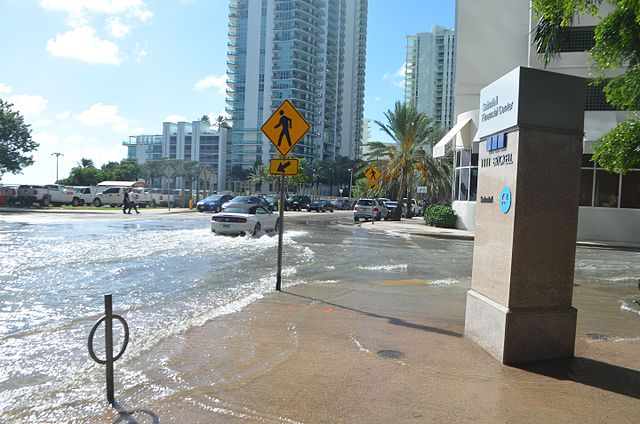