Many of you have not had an Earth Science class before, so it is necessary to prepare you for a new way of thinking – formally known as systems thinking – that you will be practicing throughout the class. Please pay attention to the following, as we do ask you a few questions about it in the Summary and Final Tasks.

The Earth is a wonderful, big messy pile of rock, water, and air with life teeming all over it, and Earth scientists are used to dealing with this messy and highly complex system. But you are not, so let's simplify things to start. The Earth is an integration of four systems or spheres: air, water, land, and life. Technically speaking, these are known as the atmosphere (air), hydrosphere (water), lithosphere (land), and biosphere (life). 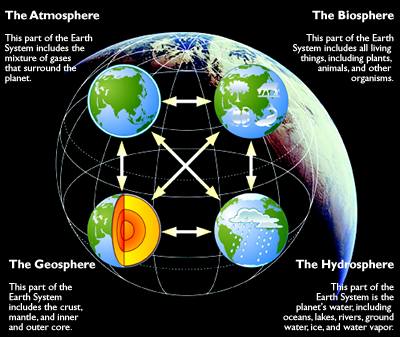 Figure 5: The Earth System consisting of the Geosphere (=Lithosphere), the Biosphere, Hydrosphere, and Atmosphere.
Click for a text description

Four images of a globe to symbolize the four spheres.

The atmosphere: This part of the Earth system includes the mixture of gases that surround the planet.

The Biosphere: This part of the Earth system includes all living things, including plants, animals, and other organisms.

The Geosphere: This part of the Earth system includes the crust, mantle, and inner and outer core.

The hydrosphere: This part of the planet's water, including oceans, lakes, rivers, groundwater, ice, and water vapor.

Modern Earth Science is focused on the connections between the spheres and this approach is extremely relevant in this course. The coastal zone is at the intersection of the lithosphere and the hydrosphere, and, as we will see, the ocean has a major impact on landforms along the coast. Now, in the case of Katrina, or any hurricane for that matter, the storm was formed and is part of the atmosphere. And, as you know, the storm caused a very severe toll on humans (biosphere). Humans have made the coastal zone their preferred home; ten percent of the world’s population, or approximately 600 million people, live on land that is within 10 meters of sea level. And as we will see, large storms are forecast to increase in the future, and sea level is rising, placing these communities more and more directly under the crosshairs of the ocean. Governments are well aware of the threat and are actively considering policies to manage coastal communities.

Even more devastating than hurricanes are tsunamis, and the last decade has witnessed two of the worst in human history. Tsunamis are giant waves in the ocean (hydrosphere), triggered by earthquakes (a primary force in the lithosphere), and have deadly consequences on coastal communities (the biosphere). The Indian Ocean tsunami in 2004 crashed ashore at heights over 100 feet and killed more than 230,000 people in fourteen countries; the Tohoku tsunami of 2011 reached heights over 130 feet and killed over 15,000 in Japan.

During the course of the semester, we will consider the interactions between the different Earth systems on a continual basis. In Units 1 and 2, we consider the lithosphere, hydrosphere and atmosphere and how they interact with each other and have consequences for the anthrosphere. In Units 3 and 4 we will focus on how humans can adapt the coastal zone to mitigate the threat of sea level rise, hurricanes, and tsunamis through engineering and policy.

Because Earth scientists are continuously working at the intersection between the spheres, their field is by necessity an integrative one, meaning that the techniques that they use are built upon the connections of the Earth, air, water, and life. As we mention above, these connections are inherently complex and subject to great changes over time. Thus Earth scientists are accustomed to dealing with complexity, fluctuation, and uncertainty, and you will see good examples of each of these factors throughout the semester. These are some of the fundamental concepts of systems thinking.

The complex connections between processes involve what are known as “feedbacks.” These are mechanisms that dampen or accelerate the impact of one process on another. Sounds complex? The best way to explain a feedback is to give an example and the best example involves the growth of ice such as in a glacier. Ice reflects sunlight better than almost any other material on Earth, and in reflecting sunlight, it lowers the amount of energy from sunlight absorbed by Earth, which makes it colder. If the Earth becomes colder, glaciers may grow, covering more area, and reflecting even more insolation, which in turn cools the Earth further. Thus, cooling instigates ice expansion, which promotes additional cooling, and so on — this is clearly a cycle that feeds back on itself to encourage the initial change. Since this chain of events furthers the initial change that triggered the whole thing, it is called a positive feedback. There are also examples of negative feedbacks whether the chain slows the change that triggered the events. We will point examples out to you in the modules.

Moreover, when you really get involved in studying processes on Earth, you will find out that some variables are related to one another in a linear fashion; for example, an increase in variable X leads to a doubling of variable Y, but in fact, many processes are related in a non-linear way. At the level of this course, we will not be exploring linearity and non-linearity in much detail, and as you can imagine, most of the processes we discuss are non-linear.

The considerable threat of events such as sea level rise, hurricanes, and tsunamis to humankind has provided a boost to the Earth sciences, broadly defined to include geoscience, geography, atmospheric science, and oceanography. Massive datasets are now available to study the Earth, and with technology that can handle terabytes of data in a heartbeat, this is an extraordinarily exciting time to be an Earth scientist. We will introduce you to a lot of data in this course. In the coastal zone, for example, satellite data provide elevations at centimeter accuracy and we can monitor how processes such as sea level rise and hurricanes are impacting the shoreline.

So, we point out examples of complexity, feedback, and Earth Systems in the modules. Whenever you see "Earth Systems, Complexity, Feedback IN ACTION" pay attention!

If you want to read more about how we Professors want you to think, check this page out:

We hope that this course brings a lot of the enthusiasm that is permeating modern Earth science.

‹ How to Succeed in Earth 107 up Capstone Project: Directions and Requirements (Old) ›