The Value of Water

The Value of Water

Does water have value?

Water is essential to life – both as a basic human need for survival and as an “ingredient” in almost everything we do, from food production to manufacturing to power generation. As we will explore in more detail in Module 2 next week, precipitation and evaporation – and thus water availability – are unevenly distributed around the globe (Figure 1). This also varies seasonally. Figure 1 shows the average global distribution of precipitation for January; to see an animation over the course of the year, check this out:

There are obviously some areas of the world that are wetter than others, and these patterns are persistent throughout the year (i.e. the deserts of the American southwest, Northern Africa, and Western Australia are perennially dry; whereas equatorial central America, Africa, and Indonesia are wet). This uneven distribution of water resources lies at the root of many topics we’ll cover in this course, because it is a primary driver of human activity, ranging from population dynamics to types and locations of particular industries, to power generation, to politics. For example, take a look at the maps in Figures 1 and 2. Are there areas of the world that are persistently wetter or drier than others? 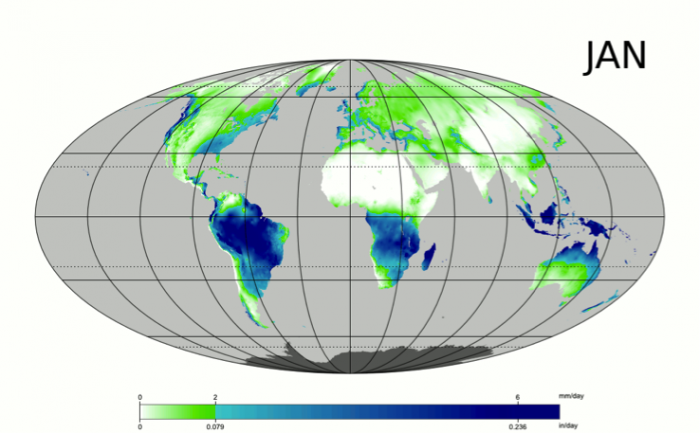 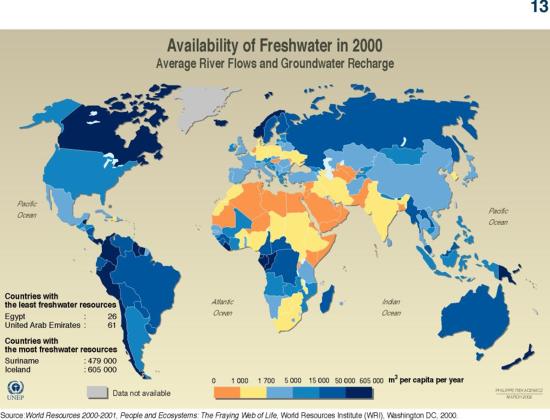 1. List 3 areas/regions that are persistently dry based on the animated map shown above.

Click for answer.
ANSWER: Answers will vary, but some wet areas (blue on the map) include: Central Africa, Eastern Central, and South America, Indonesia, The Pacific NW of the US, Western Europe.

3. Inspect the freshwater availability map shown in Figure 2. Provide 2 examples of areas of water scarcity that “map” to areas where precipitation is low.

Click for answer.
ANSWER: Northern Africa, the Middle East, and India are all examples of this.

4. Identify 2 areas that are characterized by low precipitation, but apparently are not faced with severe water scarcity. Provide a hypothesis as to why you think this is the case.

Click for answer.
ANSWER: Answers will vary, but a few examples include the Western US, China, Australia, and South America. One possible explanation is that water is imported to these areas from neighboring regions, or by rivers that flow from a headwaters area where rainfall is abundant, through the dry areas.

As we’ll see in Module 2, water is transported around the Earth by the hydrologic cycle, in which solar energy drives evaporation of water from the oceans and land surface. This water condenses in the atmosphere to form clouds and eventually to fall as precipitation. Much of that precipitation flows as surface water in rivers and streams. Some of it also infiltrates or percolates into the soil and rock, and becomes groundwater. Surface water constitutes the primary source of water for human activity – it is relatively clean, easy to obtain and move, and constantly replenished (barring prolonged dry periods; as we will discuss in Modules 4 and 8-9). Groundwater constitutes another important source of water for human activity. Although the total volume of groundwater held in fractures and pore spaces in the subsurface is large, it is replenished and flows under natural conditions far more slowly than surface water. Additional energy is required to extract groundwater, because it must be pumped from the subsurface, in some cases hundreds of feet or more. For these reasons, groundwater is generally a secondary source of water, in cases where surface water is not readily available or cannot fully meet demand.

List at least 2 problems or issues (these can be political, economic, health-related, etc…) that might arise from the unequal geographic distribution of water resources.

Click for answer.
ANSWER: Answers will vary. Some problems that could arise due to uneven distribution of water resources are political tensions over water across borders, gradients in living standards and employment between areas where plentiful water allows industry and economic development and those where it doesn’t, or ability to grow food supply vs. having to import food.
‹ Goals and Objectives up Global Freshwater Resources ›
Earth 111: Water: Science and Society