How much and for what purposes?

Globally, there is a widely varied usage of water, as a result of differing total populations and population densities, geography and climate (i.e. water availability), cultures, economies, lifestyles, and water use and reuse efficiency. This can be described both in terms of total water abstraction from surface water and groundwater sources and as per capita water withdrawal. It can also be divided to consider the end uses (for example, as percentages of the total use), or to consider the source of the water. Each of these facets of water use illuminates different aspects of the “water story”.

In many industrialized nations, the dominant water uses are for industry (including thermoelectric power generation, manufacturing, etc…) and agriculture (Figures 10-11). In contrast, domestic and municipal water use generally constitutes less than 15-30% of the total. In developing nations, this is somewhat different – total water use is smaller, less is used for industry, and the proportion used for domestic water supply is larger.

In the U.S., the average per capita use of domestic or municipal water (i.e. the most direct uses – those that would be measured by the water meter at your home) is about 215 m3 per person per year, equivalent to 156 gallons per day (as of 2002). For comparison, the total abstraction of water from surface and groundwater sources in the U.S. is about 1700 m3/person/yr, or 1230 gallons per day. The difference in these numbers represents the large proportion of water that goes to so-called “indirect” uses: food production, manufacturing, power generation, and mining, among others.

It is important to note that because many products are imported or exported across state and national borders, the total abstractions of water in a given place do not necessarily map to the distribution of water “consumption” there. Consider tomatoes that are transported from California to Massachusetts. The water withdrawal from rivers and aquifers needed to grow the tomatoes would appear on California’s “water tab”, but the eventual use of that water would be elsewhere. The same goes for agricultural and industrial products exported internationally. This flow of indirectly used water, embedded in products, is termed virtual water, and is defined as the amount of water used in generation of the product, or alternatively, the amount of water that would be needed to generate the product at the site where it is ultimately used. It is “virtual” because the water use is indirect; it is required to make or grow the item but is not actually physically contained in the item or transported with it.

Another important aspect of water use is the degree to which the water is available for recycling and/or reuse (Figure 12; cf. Figure 2). For some water uses, including industrial or domestic applications, the wastewater is captured, treated, and may be reused. These are termed nonconsumptive uses. For example, water used in homes is, for the most part, recaptured for treatment and discharged to surface water or groundwater systems – or for recycling of supply. In this sense, the water is not removed from the system (i.e. not “consumed”). In other applications, the water is effectively removed from the Earth’s surface environment and is not available to be re-captured. These are consumptive uses. Examples include water used for agriculture, which is mostly transpired by plants or evaporated and thus transferred to the atmosphere, or thermoelectric power generation, in which much of the water also evaporates (think of the steam you may have seen rising from power plants – this is consumptive water use, in action!).

1. Describe the difference between consumptive and non-consumptive water use. Provide an example of each.

ANSWER: Consumptive use means that the water cannot be recovered, usually because it is lost to evaporation or transpiration, or to deep aquifers. Examples include irrigation, lawn watering, and some fraction of the water used for fracking or cooling in thermoelectric power generation. Non-consumptive use implies that the water may be recovered and treated for reuse either by the same users or by downstream users. Examples include many industrial uses and domestic use. 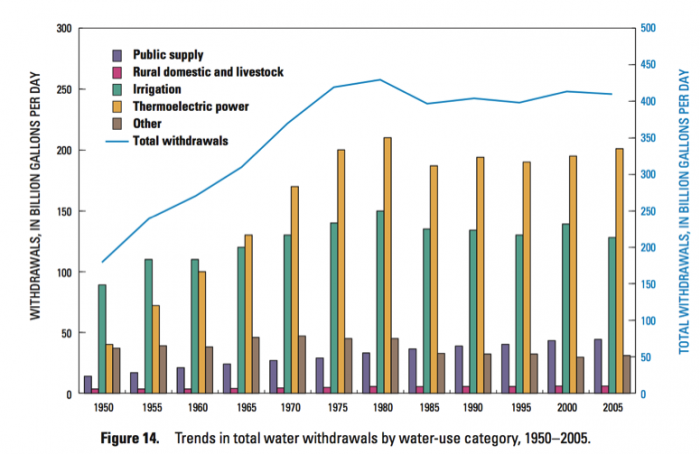 Figure 10. Water use in the U.S., shown as five-year averages, from 1950-2005. The graph shows total water withdrawals (blue curve), and the partitioning of those uses between public/domestic supply, power generation, irrigation, and “other”.
Click here for a text description
Trends in total water withdrawals by water-use category, 1950-2005. Figure examines 5 different water users: public, rural domestic, irrigation, thermoelectric and other, and total withdrawals. Rural domestic water withdraws have stayed fairly consistent around 10 billion gallons a day. Public supply has slowly increase from 20 billion to 45 billion. Other uses have decrease by about 10 billion to around 35 billion. Irrigation has increased from 1950-1980 but then decreased slightly until 2005 to around 110 billion. Thermoelectric power increased steeply from 1950-1980 and then leveled out around 170 billion. The total withdrawals trend similarly increases from 1950-1980 and then levels out around 400 billion gallons of water withdrawn per day.
Source: J.F. Kenny et al., U.S. Geological Survey Circular 1344 (2009) 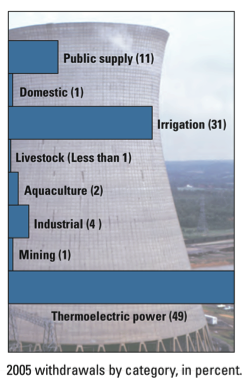 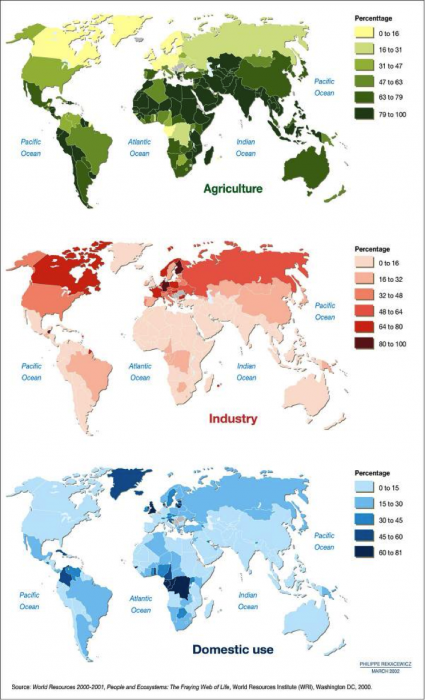 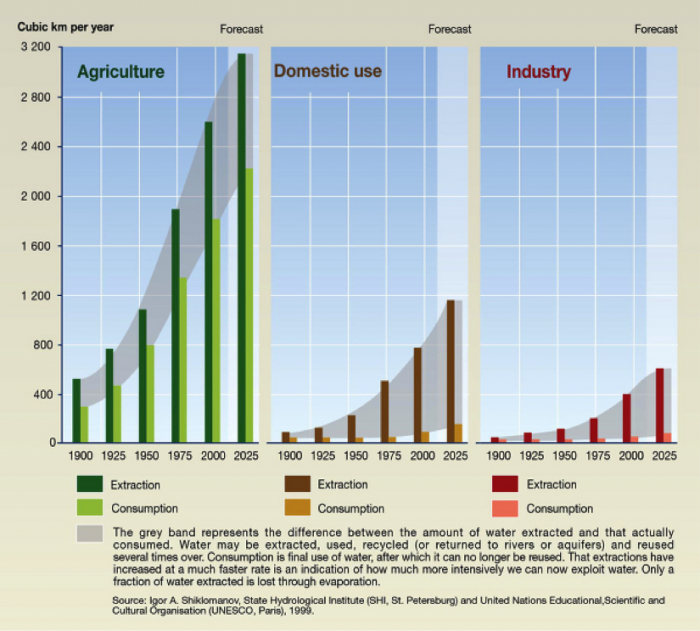 Figure 13. Proportions of water withdrawals used for agriculture, industry, and domestic use from 1900-2000, and projected for 2005. The gap between extracted and consumed water is shown by the gray band in each panel.
Click here to expand for a text description of Figure 13
Extraction vs consumption bar graphs for water in agriculture, domestic use and industry from 1900-2025. Extraction bars are always smaller than consumption bars. Agriculture both extracts and consumes the most water followed by domestic use then industry. All three graphs show an increase in consumption and extraction but the separation of between the two bars grows over time. The most dramatic difference appears in domestic use, followed by industry, then agriculture. The difference between consumption and extraction is highlighted with a grey band. Water may be extracted, used, recycled (or returned to rivers or aquifers) and reused several times over. Consumption is the final use of water, after which it can no longer be reused. That extractions have increased at a much faster rate is an indication of how much more intensively we can now exploit water. Only a fraction of water extracted is lost through evaporation.
Source: United Nations Environment Programme Vital Water Graphics

2. Have the dominant uses of water in the US changed much in the past 50 years? If so, how?

ANSWER: Yes, they have. Prior to around 1965, irrigation was the largest use of water in the US. From then to the present, thermo-electric power generation has overtaken it, although the amount of water used for both applications has grown.

3. Note three regions or countries where the dominant water use is for agriculture (look at Figure 12). Note three where it is for industry. Is this what you would have expected?

4. How much water do you think you use per day for household or domestic activities (e.g., washing dishes, laundry, showering, cooking, drinking)?

ANSWER: Most people underestimate their use and guess 20-50 gallons per day.

‹ Water Usage: What and Where? up Supply and Use on Multiple Scales: Units of Water ›
Earth 111: Water: Science and Society