Consequences of Release of Water

Consequences of Release of Water

Release of water from the downstream side of reservoirs at dams affects the ecology of the river downstream because there is little or no entrained sediment to replenish alluvial deposits along the river, and, in fact, the now sediment-starved river is more likely to erode existing bars, beaches, and riverbeds. In many cases, the clear water released from dams can erode fine-grained sediments (silts and clays) from river banks and bars, leaving behind the coarser sand and gravel deposits that would require higher flow velocities to mobilize (as we covered in Module 3…remember?). Increased scouring can also lead to destabilization and landsliding along the river banks.

Erosion of sandbars and beaches poses a threat to native fish species that depend on sheltered waters for spawning or their fry. For example, the population of the humpback chub, a fish species native to the Colorado River system, has decreased by an estimated 75% since 1982. The chub was uniquely adapted to thrive in the sediment-laden, low-visibility and naturally turbulent waters of the Colorado River. Since the construction of Glen Canyon Dam, the clear, colder, and more stable flow has favored non-native predatory species like brown and rainbow trout.

Deposition and storage of sediments behind dams also lead to the buildup of organic material and nutrients adsorbed to sediment grains or trapped in pore spaces that will be released if the dam is decommissioned. As discussed in the next part of this module (“Bringing Down the Dams”), if or when dams are decommissioned, many years’ worth of sediment, nutrients, and carbon must be managed. Release of the stored sediment can lead to: 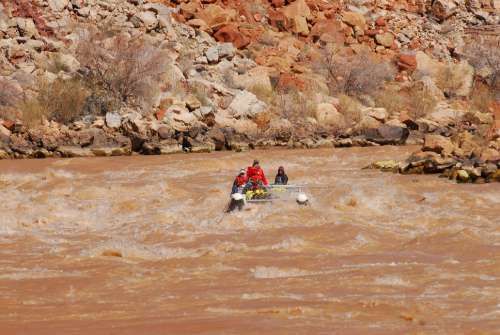 Figure 10 - Scientists monitor the Colorado River downstream of Glen Canyon Dam during the high-flow experiment of May 2008.
Source: USGS

Recent controlled water releases have been conducted to explore the possibility of delta and downstream habitat renewal. In 1996, a seven-day-long experimental release of 1290 m3/s (that’s about 20 million gallons per minute) from Glen Canyon Dam was conducted to evaluate the prospects for the restoration of stream habitat through the rebuilding of sandbars and beaches. The experiment yielded mixed results – most notably that sand was initially deposited on bars and beaches, but only during the first couple of days of the release. There was not enough sediment load in the released water to sustain deposition, partly because the experiment was not synchronized with the natural seasonal sediment flux from upstream tributaries; as a result, existing bars were eroded and remobilized in the late stages of the controlled flood. In March 2014, a “pulse flow” of 105,000 acre-feet (about 1% of the River’s annual discharge) lasting until mid-May was released from Morelos Dam to bring water to the Colorado River Delta through a joint US-Mexico initiative. You can listen to a brief news story about the experiment: Well, I'll be Un-Dammed: Colorado River (Briefly) Reached The Sea. The pulse flow was designed to mimic natural spring floods that disperse seeds, nourish the delta, and provide habitat for waterfowl. These experiments suggest that partial restoration may be possible, but will likely require a better understanding of the dynamics of stream habitats and sediment delivery and transport processes.

‹ Consequences of Concomitant Reduction up Other Impacts ›
Earth 111: Water: Science and Society