Think about your impressions of dams and the reservoirs behind them that you have seen. Large concrete dams have grandeur, and the huge lakes that they contain are often sited in attractive canyon or valley settings and provide picnic, swimming, and boating facilities. If you had grown up in the arid southwestern U.S., you might have thought of these as oases—providing relief from summer heat and dryness; had you grown up in the eastern U.S., you may have appreciated the dam-impounded reservoirs as camping and fishing spots. It is likely that, when you were young, you did not appreciate the real purposes of these structures or the controversies that surrounded some of them as they were proposed and built.

Dams most importantly provide: 1) dependable water supplies in areas experiencing significant annual fluctuations in precipitation and runoff or lacking other water sources such as groundwater; 2) a flood control buffer for times of excessive precipitation and runoff; 3) hydraulic head for generating hydroelectric power; and 4) recreational opportunities including boating, fishing, and swimming. During the colonial settlement and expansion in eastern North America, dams provided direct hydropower primarily for mills. Later, during the settlement of the semiarid to arid west, small dams provided water storage for irrigation and watering livestock. These two contrasting uses of dams, one in a relatively water-rich region, and the other in arid lands led to different water laws, which have been outlined in Module 1. An estimated 75,000 dams (over 25 feet) have been constructed in the U.S. alone (Graf, 1999), providing water storage of about 4 acre-feet (5000 m3) per year per person. Please go to this video of U.S. dam building since the early 1800s to see the pace and geographic location of dam building.

US dams - Timelapse video of when Dams were built in the United States
Credit: CSDMS

If the video does not play, watch it on the CSDMS website.

Figure 1 illustrates the increase in water storage from 1900 to the present on a global basis. This compilation shows clearly the impact of the U.S. dam building era, beginning in the 1950s as well as the decrease in the rate of water storage beginning in the 1980s with reduced rates of dam construction and the onset of dam removal projects. With an estimated 22,000 large dams China's push to build more dams is creating controversy.

Please take some time to read about it China’s Great Dam Boom: A Major Assault on Its Rivers. 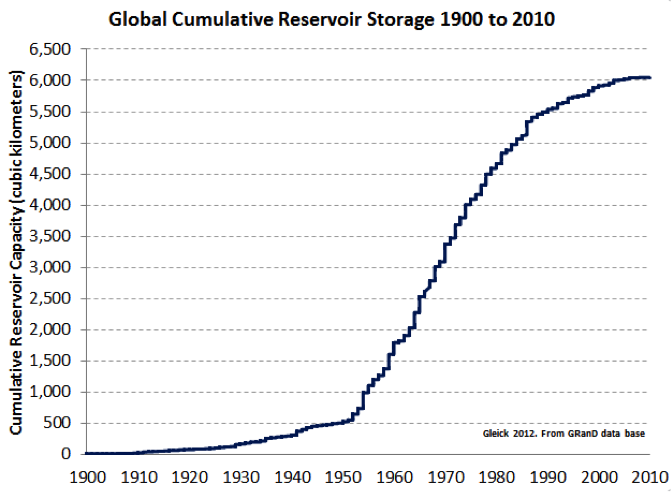 Figure 1. Water storage in reservoirs behind dams from 1900 to 2010. The amount of storage spikes up around 1955 or so.
credit: P. Gleick, The Pacific Institute. Used by permission.

2. From inspection of Figure 1, during what time period was dam construction happening most rapidly?

ANSWER: Where the slope of the graph is steepest, reservoir capacity was increasing most rapidly; this is between around 1955-1990.

3. Globally, dam construction has tapered off since around 1990-1995. Can you think of any reasons why this would be the case?

ANSWER: There are probably several reasons. For the most part, the best and largest dam sites have already been developed. In addition, environmental impacts and concerns have become increasingly visible and led to more opposition and stricter regulation.

Dams are, at times, perceived as being environmentally benign, particularly because the generation of hydroelectric power involves no direct greenhouse gas emissions. But there are impacts of dams that are deleterious to the environment and human health. For example, one of the major impacts of having constructed large dams on active, high gradient river systems carrying large volumes of water and sediment is the buildup of sediment behind the dam(s) and the decrease in sediment supply to coastal regions. Many modern deltaic coasts, including the Mississippi Delta region and the Colorado River Delta in North America, have been receding rapidly as the result of a series of dams emplaced on the Missouri River and the Colorado River, respectively. There are also impacts of ponded waters on human health, particularly in tropical regions where diseases and parasites are harbored by the biota in warm, slowly circulated waters. In addition, dams commonly impede the upstream migration of anadromous fishes to spawn, including shad and herring on the east coast of the U.S. and steelhead and salmon in the west, thus limiting natural populations and reaches of these fishes. Controversy surrounds many older dams that impede fish migration. Dams also alter environmental conditions, including changing water temperatures, oxygen concentrations, and nutrient loads that can substantially alter the ecology of river systems, as can be seen in the case of the Colorado River below Glen Canyon Dam (see below).

Yet, dams do serve human needs and there is a rich history of dam building in the U.S. that has now diminished (Figure 1). Although dams are now rarely constructed in the U.S., other countries have continued to build dams to control floods and provide hydroelectric power. In the U.S. many hydroelectric dams require upgrades and recertification because of newer regulations. Such aging dams, many privately owned, face economic pressures in conforming to modern requirements that include studies of environmental impacts, possible additions of fish ladders that will allow fish to bypass dams, etc. These impacts are weighed against benefits (water storage, hydroelectric power generation) in recertification. Increasingly, dam owners assess costs and find it much less costly to remove a dam than to refit it to conform to requirements. A number of large dams have now been removed or are proposed for removal. Even though dam removal can be beneficial, there are also possible significant environmental issues to be confronted, including the amount and composition of sediment ponded behind the dam.

‹ Goals and Objectives up Ponding the Waters: Impacts of Dams ›
Earth 111: Water: Science and Society