The High Plains Aquifer system consists of Tertiary sedimentary rock, dominantly sandstone and gravel (Figure 45), eroded from the ancient Rocky Mountains and deposited in the Tertiary period (from about 31 to 5 million years ago). The Ogallala Formation is the primary aquifer unit in the system. The aquifer underlies almost 175,000 mi2 and spans eight states, with most of its area in Nebraska, Texas, and Kansas. This region is among the largest and most productive croplands in the U.S. and is the source of almost 20% of our corn, wheat, and cotton production, as well as a significant portion of our soybeans, sorghum, and alfalfa. It is also host to almost 20% of the cattle raised in the US. Because the climate is semi-arid, with mean annual precipitation ranging from 12 inches in the West to 33 inches in the East, growing economically viable crops requires substantial irrigation. If you have ever flown over the Midwest on a clear day you may have seen circular “patches” of irrigated land - the hallmark of center-pivot irrigation systems (Figure 46).

Although farming has been a major part of the economy in the region since the late 1800s, in the 1960’s new technology in electrical pumps allowed access to deeper groundwater and ushered in an era of rapidly expanding irrigated acreage (Figure 47). Accompanying this expansion, aquifer-wide groundwater withdrawals increased from a few million acre-feet (M-AF) per year to almost 20 M-AF. Water level declines began in the 1950s, with the onset of intensive groundwater extraction for irrigation-based agriculture. The total overdraft of the aquifer is almost 250 million acre-feet, from pre-development (ca. 1950) to 2011 – this is almost 17 times the annual flow of the Colorado River. 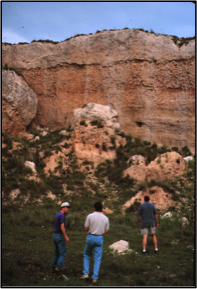 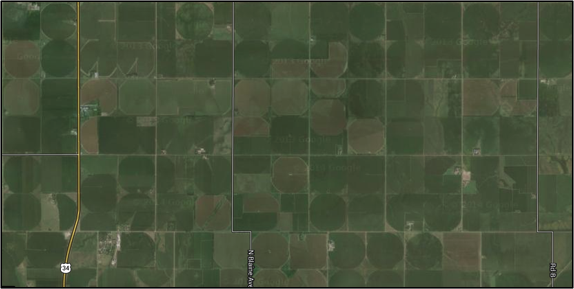 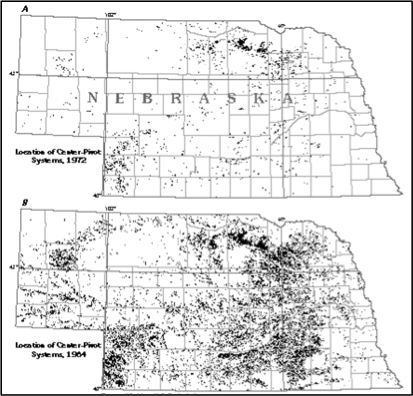 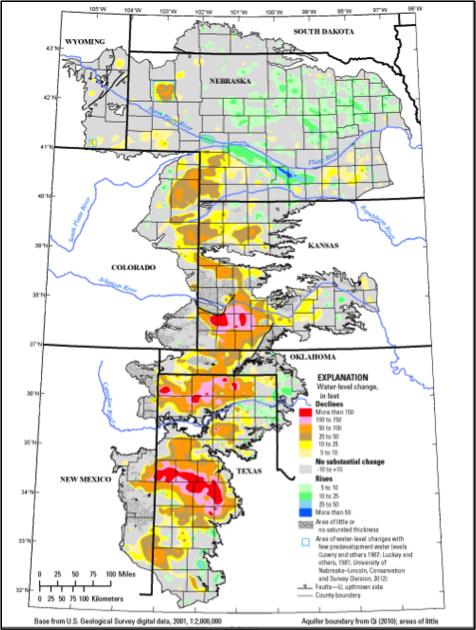 As a consequence of sustained overdraft for several decades (see Figure 42 above), water levels in the aquifer have dropped substantially, by more than 100 feet in many areas (Figure 48). Over half of this decline has occurred since 2000. Water level declines are not evenly distributed, however. The highest rates of decline are focused in the southern reaches of the aquifer system, where recharge rates are low and irrigation demand is highest. In the northern portions of the aquifer system, water level declines are considerably smaller – and in some cases, the water table has actually risen – primarily due to locally higher recharge focused along the Platte River (Figure 48).