If one wants to make the case for global warming, why not start with the obvious and find out what recent temperature measurements have to say? The plot below shows temperature measurements for the ocean surface, the lower atmosphere, and the land averaged together. The x-axis is time, from the year 1850 until the year 2007. The left-hand y-axis is the global temperature anomaly in degrees Celsius. This anomaly is taken relative to the average of the span from 1961 to 1990. We can see that the land, sea, and air were colder before 1961–1990, and they are all warmer now and have been increasing steadily and rapidly over the last few decades. Note that the rate of increase is getting faster, as the fits to the data points for shorter timescales are steeper (compare the slope of the red line that fits the data over the last 150 years to the slope of the yellow line that fits the data for the last 25 years). 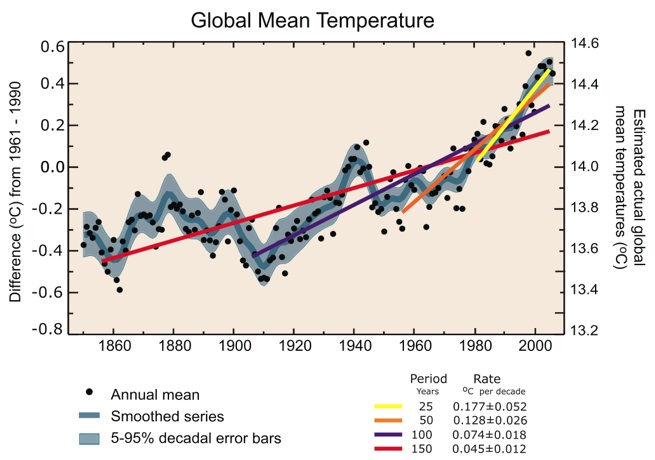 Annual global mean observed temperatures (black dots) along with simple fits to the data. The left-hand axis shows anomalies relative to the 1961 to 1990 average and the right-hand axis shows the estimated actual temperature (°C). Linear trend fits to the last 25 (yellow), 50 (orange), 100 (purple), and 150 years (red) are shown, and correspond to 1981 to 2005, 1956 to 2005, 1906 to 2005, and 1856 to 2005, respectively. Note that for shorter recent periods, the slope is greater, indicating accelerated warming. The blue curve is a smoothed depiction to capture the decadal variations. To give an idea of whether there are meaningful, decadal 5 to 95% (light blue) error ranges about that line are given (accordingly, annual values do exceed those limits). Results from climate models driven by estimated radiative forcings for the 20th century suggest that there was little change prior to about 1915 and that a substantial fraction of the early 20th-century change was contributed by naturally occurring influences including solar radiation changes, volcanism, and natural variability. From about 1940 to 1970, the increasing industrialization following World War II increased pollution in the Northern Hemisphere, contributing to cooling, and increases in carbon dioxide and other greenhouse gases dominate the observed warming after the mid-1970s.

Remember that the overall annual average temperature of something huge, like the ocean, or the land surface, is not directly relevant to daily weather patterns. Therefore, even what looks like a modest increase of less than a whole degree Celsius over twenty years can have a large impact on world climate.

Recall from our discussion of heat flow in the New Madrid lesson that the Earth is a constant emitter of heat, both from the original heat of formation of the planet and from the decay of radioactive elements. The geothermal gradient describes the rate of increase of temperature of the interior of the planet as a function of depth and can be inferred from theoretical geochemical calculations, as well as seismic wave speed. The average geothermal gradient of the Earth is about 15°–25° C per km. This depends on the tectonic setting, as we saw in the New Madrid lesson.

Instrumented boreholes are used to measure heat flow at the surface (upper few kilometers or so) and they generally show a negative deviation from the geothermal gradient in the upper hundred meters of the subsurface because heat loss is greatest where the temperature difference is greatest—at the surface. This leads to a temperature vs. depth relationship that should look like the red lines on the figure below. In fact, boreholes are increasingly showing evidence of recent warming at the surface of the Earth. In the figure below the actual temperature measurements are the black dots and the red lines are just a sketch. The black dots show a positive deviation from the expected geothermal gradient. The observed profiles indicate warming, and the depth of the bend indicates warming in the last 100 years.

Temperature measurements (black dots) and a sketch of the expected geothermal temperature profile (red curves) in three boreholes in eastern Canada. The curvature in the upper parts of the profiles is a response, at least in part, to temperature changes at the surface. The linear increase of temperature with depth in the deeper sections of the holes is the undisturbed geothermal gradient.

‹ Climate Change in the Holocene up Observations of Melting Ice ›
EARTH 501: Controversies in the Earth Sciences