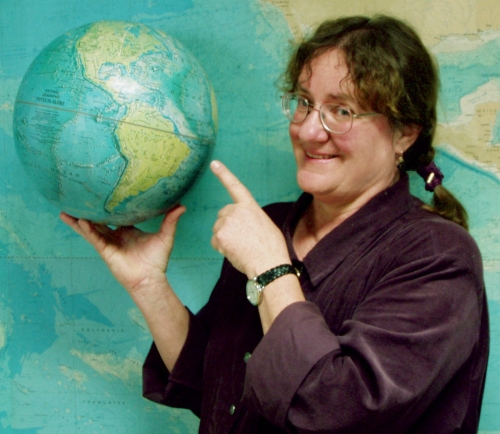 Where in the Plate Tectonic storyline is Tanya Atwater?

Here is an abbreviated timeline placing Tanya Atwater's work in the evolving theory of plate tectonics.

The above three ideas and the many more published works by other scientists about the theory of plate tectonics provided a foundational knowledge base for Tanya Atwater as she arrived on the scene during the late 1960’s.  Dr. Tanya Atwater has been publishing her research steadily since 1968 and her work is so highly regarded that her papers are frequently cited. 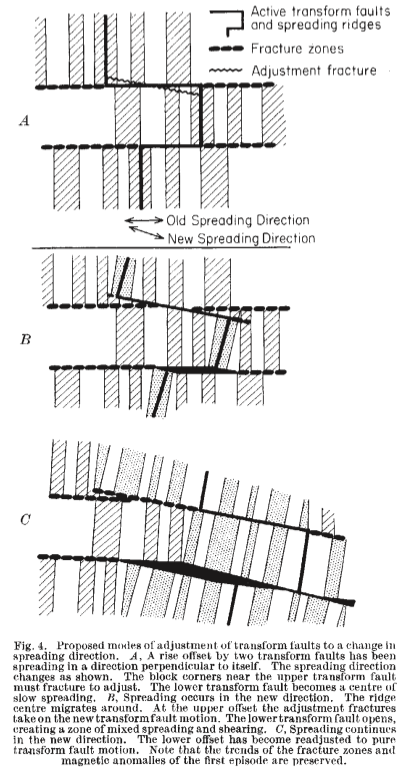 Two big ideas that have come out of Tanya Atwater's research are her work with “propagating rifts” and her famous 1970’s paper outlining the history of the San Andreas Fault that currently runs through California.

In 1968, H.W. Menard and Tanya Atwater published a paper called “Changes in Direction of Sea Floor Spreading” which took the work done by Vine and Matthews a step further.  Sea floor spreading centers would adjust to plate motion and change direction rather than continue on in a straight path in what was known as “propagating rifts”.  As you can see from the figure on the right, (taken from Menard, & Atwater, 1968) their model suggested as the plates shifted and moved, so did the spreading centers.

This idea of propagating rifts explains the complicated patterns on the sea floor.  The work on propagating rifts continues to be refined. Below is a picture taken from an article written by Atwater (Atwater, 1981) that summarizes some of the work that had taken place since 1968.    Figure a is based on the original proposal of sea floor spreading by Vine and Matthews.  Figure b and c are more detailed nuances of how the stresses of plate motion can impact the sea floor and create a much more complicated picture than originally thought.

Dr. Tanya Atwater took what had been an emphasis on ocean floor plate tectonics and applied it to the continental features of the western North America.  Her work provided the history of the San Andreas fault from pre-existence to the present day.   Atwater published her findings in 1970 in a paper known as “Implications of Plate Tectonics for the Cenozoic Tectonic Evolution of Western North America” which essentially became her thesis for her PhD.

Dr. Atwater built on the work done by McKenzie and Morgan in 1969 on what is known as “triple junctions”.  Their work explained how the San Andreas Fault system was formed after the subduction of a plate they called “Farallon”.  Atwater extended this work onto land by describing how this subduction affected the North American Western continental earth.  Forty million years ago, the Farallon Plate was subducting under the North American Plate with the Pacific Plate.  As part of it subducted completely under what is now know as Southern California (about 25 million years ago), the upper half that had not subducted became known as the Juan De Fuca Plate.  Once the southern half of Farallon completely disappeared, the boundary along the southern part of California was now between the Pacific Plate and the North American Plate.  The Pacific Plate is moving in a North-Westerly direction, so it essentially has been pulling the continental crust along its border.  The San Andreas Fault is unusual because it is both a major fault line and a transform border between the Pacific Plate and the North American Plate.  Atwater’s work has been to explain how this motion in the ocean has impacted the continental land/structure and has been refined from her 1970’s paper over time.  You can see this movement and the effects on land in the animation below created by Atwater.  The lighter blue in the water area depicts new ocean crust being formed and as you watch this animation, notice the effects of the movements of the Pacific Plate and North American plate have on the entire western continent of North America. (click on image below) 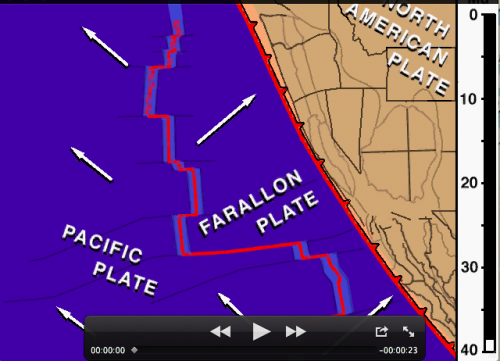 In 2002 Dr. Atwater was awarded the Director’s Award from the National Science Foundation (NSF).  This award was in recognition of the work of Atwater and her graduate/undergraduate students to take geological processes and create computer animations to visually show these processes.  Dr. Atwater used this money to help start the The Educational Multimedia Visualization Center of the Department of Earth Science, U.C.S.B (EMVC) which has taken her work and made it available as an online source for these educational animations. http://emvc.geol.ucsb.edu/index.htm Atwater’s vision for these animation, “is for every schoolchild to be able to look out a window and understand the world.” (Reed, 2002) (click on image below) 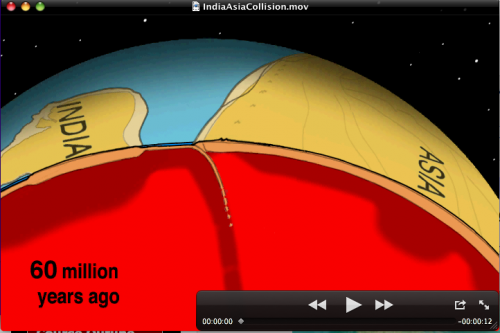 Dr. Atwater came into geology by accident.  She changed her majors several times at MIT and took a geology course her junior year by mistake.  She loved it and transferred to UC Berkeley and graduated with a geophysics degree.

Dr. Tanya Atwater was one of the first women who entered the geological field in ocean floor research.  Women were considered to be unlucky on ships, and as a result,  she encountered what she called “blatant sexism” (Dreifus, 1999) She broke ground for women in many ways.  July 1968 Atwater was the first woman chief scientist of a research vessel and in 1972 she became the first woman faculty member of Scripps. (Day, 2002)

Dreifus, C. (1999, October 12). A conversation with Tanya Atwater;she put the San Andreas fault in its place. The New York Times