The Life of Beno Gutenberg

Beno Gutenberg was born in Darmstadt, Germany on June 4, 1889. He attended the University of Gottingen and earned his PhD in 1911. As a student he chose geophysics as his course of study and eventually joined the Geophysical Institute. Emil Wiechert, whose work would serve as a foundation for Gutenberg’s research, had recently established this institute. Gutenberg’s dissertation was written on microseisms, which he later used to try to track hurricanes and typhoons during WWII (Mitchell).

After earning his PhD, Gutenberg went on to further his study of the Earth’s interior. He made the first correct determination of the radius of the Earth’s core in the year 1913. This same year, he joined the German University of Stroudsburg, which was the headquarters of the International Seismological Association (Mitchell.)

In 1914, WWI erupted onto the world stage and Gutenberg was swept into the German army. He was assigned to train military officers for two years. He could no longer be in the infantry because a grenade caused a head-shoulder injury early in his military career. By 1916, he moved to a position in Berlin, where he worked for the weather forecasting service (McPherson.)

After the war, Gutenberg moved home to Darmstadt to work at the family soap factory in 1918. He was there to help his father who was desperately in need of help running the operation after his other son had been killed in the war. Gutenberg did not allow this family obligation to keep him from his work. He continued to study the thickness of the mantle under oceans and continents and created his own theory on side-to-side movement of the crust (McPherson.) These studies were conducted through the University of Frankfurt-am-main, where he became a professor. During this time, he wrote many impressive research papers and is best known for editing and contributing to the Handbuch der Geophysik (Mitchell.)

By the year 1930, Gutenberg made his transition from Europe to the United States. He joined the renowned Seismo Lab and became a professor of geophysics at the California Institute of Technology. The lab officially became part of Caltech in 1936 and Gutenberg became its director in 1947. It became the leading center for study of earthquake and the deep Earth (Mitchell).

Overall, Gutenberg published three major books and almost 300 scientific articles during his career. He also belonged to several professional organizations including the International Union for Geodesy and Geophysics, Seismological Society of America, Academia dei Lance, and the Royal Society of New Zealand. During his career he was awarded many honors including: election to the National Academy of Sciences, Bowie medal of the American Geophysical Union in 1933, Lagrange Prize of the Royal Belgian Academy in 1950, Weichert Medal of the Deutsch Geophysikalische Gegellschaft, and an honorary degree from the University of Uppsala in 1955 (Mitchell.)

Gutenberg retired from his positions at Caltech in 1958. He was forced to cease his work in 1960 when he contracted a virulent form of influenza. This turned into fatal pneumonia and he died on January 25, 1960 (Mitchell.)

Beno Gutenberg was a driving force behind the acceptance of seismology as an international science of earthquake detection and study. In the year 1913, Gutenberg proved the existence of the Earth's core.  He recognized that the P-wave shadow zone was due to the refraction and reflection of primary waves by the Earth's molten core.  He also found that the S-wave shadow zone resulted from the complete absorbtion of the secondary waves by the liquid core.  This information allowed him to calculate that the Earth's core began at 1800 miles (2880 km).  Eventually, this core-mantle boundary was named after him and is known as the Gutenberg Discontinuity (www.bookrags.com).  He is also well known for editing and contributing to the Handbuch der Geophysik (Mitchell).

During the years of 1931-1939, Gutenberg worked on a series of papers with Charles Richter, a noted physicist after which the “Richter Scale” is named. Their article On Seismic Waves provides basic information on the travel times of several seismic phases through the Earth’s interior. They also described an area of low velocity in the Earth’s upper mantle that is still carries Gutenberg’s name today (Mitchell.) He worked alongside physicist Charles Richter at the Seismo Lab at Caltech. This is one of the world’s most renowned centers for geophysical research. Some of his other notable colleagues were Hugo Benioff and John Buwalda. Gutenberg led the study of teleseismic recordings used to study the Earth’s deep interior (www.seismolab.caltech.edu).

In 1941, Gutenberg published Seismicity of the Earth, which became a major influence in later scientists’ efforts to describe the theory of plate tectonics. His 1959 publication Physics of the Earth’s Interior summarized more of his views on earthquakes and the Earth’s interior. His many publications also included On Seismic Waves, which described the travel times of several seismic phases. Overall, he wrote three major books and almost 300 scientific articles during his career (Mitchell.)

While most of his career was focused on solid Earth geophysics and seismology, Gutenberg did spend a short time studying meteorology. In 1916, he served in Berlin at the weather forecasting service (McPherson.) Later, during WWII, he tried to use his earlier study of Microseisms to track hurricanes and typhoons in the Pacific (Mitchell).  A microseism is defined as "a faint earth tremor caused by natural phenomena such as winds or ocean waves (en.wikipedia.org/wiki/Microseism)."

Gutenberg has two sections of the Earth’s interior that bare his name. First, there is an area at the bottom of the D” layer that is called the Gutenberg discontinuity.  It occurs at 2900 km and marks and abrupt change for seismic waves that are traveling through the Earth.  The secondary (S-waves) disappear and the primary (P-waves) slow down at this transition point between the mantle and the outer core of the Earth (science.jrank.org.)

Section B at 2885 km marks the Gutenberg Discontinuity, also known as the D" layer.

Second, there is the Gutenberg Low Velocity Zone, which is between the lithosphere and the asthenosphere. The velocity of seismic waves slows as they transition between these two layers (www.scienceclarified.com.) 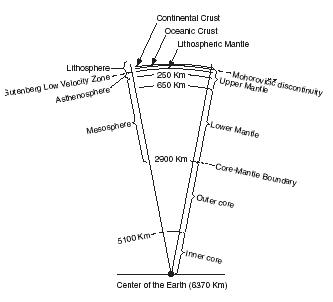 Finally, previous Earth 501 students will probably remember creating frequency-magnitude diagrams for earthquakes in the New Madrid Seismic Zone.  The proper name for these diagrams is actually Gutenberg-Richter Diagrams named after Beno Gutenberg and Charles Richter!  Two examples are shown below. 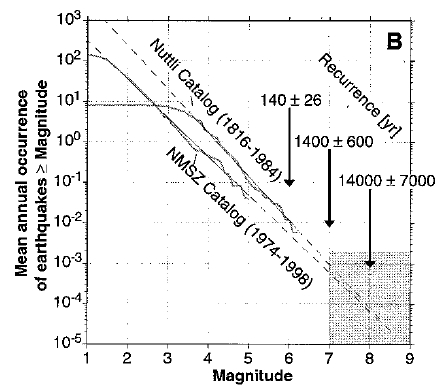 Gutenberg-Richter Diagram showing the frequency vs magnitude of 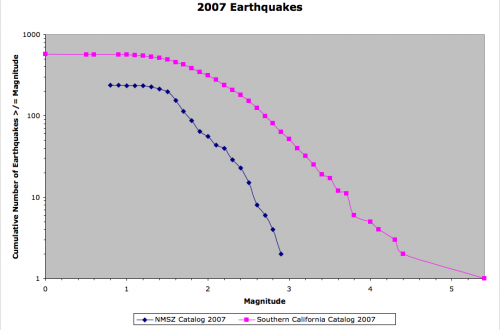 Earth 501 Gutenberg-Richter diagram showing the frequency vs. magnitude of 2007