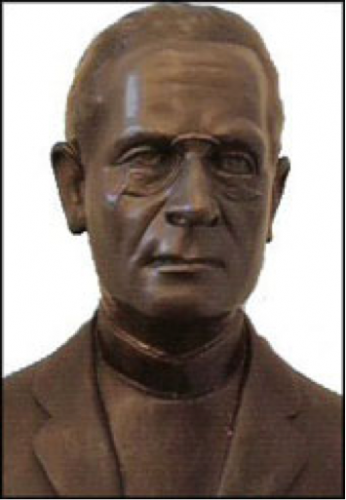 Giuseppe Mercalli (1850-1914) was an Italian seismologist, vulcanologist, and Roman Catholic priest best known for developing an earthquake intensity scale.  He was born and educated in Milan, and upon graduation from college became a professor at the local seminary.  Mercalli was soon removed from his post at the seminary, but the Italian government quickly found him positions at schools across the country (Marconi, 1914).  By 1892, he had relocated to Naples, where he would spend the rest of his life near the volcano he studied most closely: Vesuvius (Istituto Nazionale di Geofisica e Vulcanologia, a).  He died a mysterious death in 1914, burning in a fire in his apartment.  It was initially deemed an accident, but within days speculation arose that he had been murdered ("Prof. Mercalli Murdered?," 1914).

Mercalli's most famous contribution to solid earth science is his work on the earthquake intensity scale.  While studying seismic activity in Italy in the late 19th century, his access to seismic instrumentation was limited.  Some seismographs and seismoscopes (devices that signal that an earthquake has occurred, and sometimes also indicate direction) were available, but most of Mercalli's information came from personal accounts and observations of damage (Davison, 1930).  To provide some consistency to his earthquake analyses, he decided he needed some method to rate the relative effects of each event.  Mercalli developed a scale with six degrees (meaning the most disastrous earthquakes would have had an intensity of 6), but quickly realized that this did not provide enough precision.  Around the same time, another intensity scale called the deRossi-Forel scale was gaining in prominence.  It had the advantage of ten degrees of intensity, but it lacked some detail in the description of each degree.  In 1902 Mercalli modified this ten-degree scale to include the detail he desired, and his new scale quickly caught on among European scientists.  Other seismologists continued to tweak the scale (Cancani increased it to the current 12 degrees and Sieberg further refined the descriptions), but when the English translation was released in 1931 it bore Mercalli's name (Musson, Grünthal, & Stucchi, 2009).  The current scale is known as the Modified Mercalli Intensity Scale (click here for the USGS version of this index).

Another key contribution to seismology that Mercalli made was his detailed cataloging of Italian earthquakes.  Mercalli felt that in order to understand an earthquake, you needed to understand the seismic history of that region.  In his book I Vulcani e Fénomeni vulcanici in Italia, he produced this history for his homeland.  Plotting earthquakes over space and time, Mercalli was able to assemble a clearer picture of where most of the events were centered (Davison, 1930).

Mercalli's exhaustive work on earthquakes built his reputation throughout southern Europe, and he was often called upon to study events throughout the continent.  He traveled to Spain in 1884 to examine the aftermath of the Andalusian earthquake, and in 1887 Mercalli was the lead investigator of the deadly Imperia event along the French and Italian Riviera (Davison, 1930). 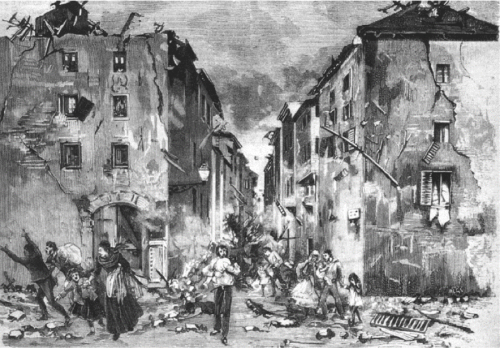 Image of Diano Marina, Italy following the Imperia earthquake of 1887, of which Mercalli was a principal investigator. (Kozák, J. & Cermák, V., 2010)

Beyond his careful work on earthquakes, Mercalli was a lifelong student of volcanic activity.  He published I Vulcani attivi delta Terra, which cataloged the known volcanoes of the world, and developed a scale to compare volcanic eruptions.  Mercalli had a special affinity for Vesuvius, whose activity he tracked with much the same painstaking detail as he did Italian earthquakes.  He served as director of the Vesuvius Observatory from 1911 until his death (Istituto Nazionale di Geofisica e Vulcanologia, 2011).  By the end of his life he had earned international fame as a scientist, with his tragic death garnering page three coverage in the New York Times ("Prof. Mercalli Murdered?," 1914). 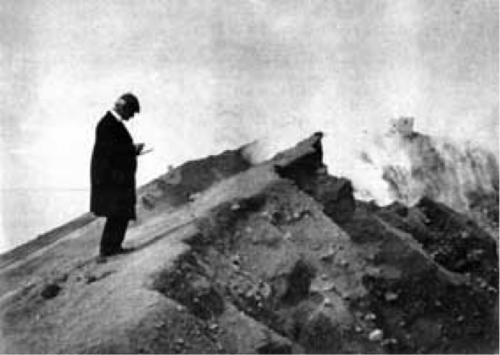 Mercalli at Vesuvius, where he focused much of his vulcanology research. (Istituto Nazionale di Geofisica e Vulcanologia, b)

Mercalli's ouster at the seminary in Milan, which ultimately led to his relocation to the seismically-active Naples, was a result of his support for Antonio Rosmini, a controversial priest and philosopher (Marconi, 1914).  Rosmini, derided by bishops and even the pope in his time, was beatified (deemed "blessed") by the Church in 2007 and is now a candidate for sainthood (Vatican).