The Earth's magnetic field occasionally undergoes a spontaneous reversal in which the north and south poles switch places. The mechanism of reversals is still not completely understood, although simulations on supercomputers have been able to reproduce them. These reversals happen very fast geologically speaking.

How do we know reversals must happen fast? (I mean geologically fast)

Geomagnetic reversals must happen fast in a geologic sense because we do not find much evidence of rocks polarized with an in-between orientation. Remember the figures that show magnetic "stripes" of normal and reversed polarity on the ocean floor. This is a case where the world really is black and white and not shades of grey.

Below are some snapshots from the Glatzmaier-Roberts model of the geodynamo, which was first published in 1995. This model successfully reproduces the intensity of the Earth's field, its dipole character, and its present westward drift. It has also undergone a spontaneous reversal, as shown below (Figures from Glatzmaier and Roberts,1995). 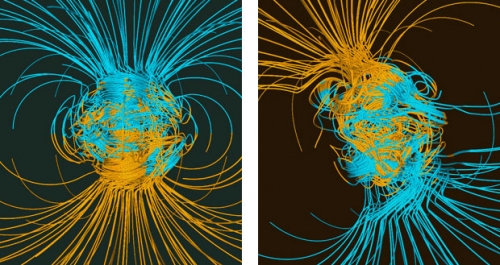 LEFT: A snapshot of the 3D magnetic field structure simulated with the Glatzmaier-Roberts geodynamo model. Magnetic field lines are blue where the field is directed inward and orange where it is directed outward. The rotation axis of the model Earth is vertical and through the center. A transition occurs at the core-mantle boundary from the intense, complicated field structure in the fluid core, where the field is generated, to the smooth, potential field structure outside the core. The field lines are drawn out to two Earth radii. Magnetic field is wrapped around the "tangent cylinder" due to the shear of the zonal fluid flow.
RIGHT: Like in the previous figure, but 500 years before the middle of a magnetic dipole reversal.
Source: Gary A. Glatzmaier 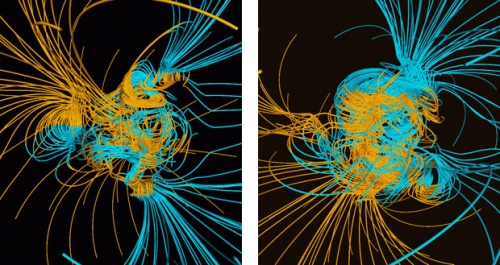 We still don't have a perfect understanding about how the outer core's convection has sustained the field for at least 3,500 million years, but being able to simulate the most obvious features of the Earth's field correctly is an awfully good start.

Below is the 1999 Geological Society of America geologic time scale chart. The main thing I want you to see on this chart is that the periods of normal and reversed polarity have been marked so that they correspond with various ages on the time scale. These periods of time have mostly been set by careful correlation of marine floor magnetic properties. 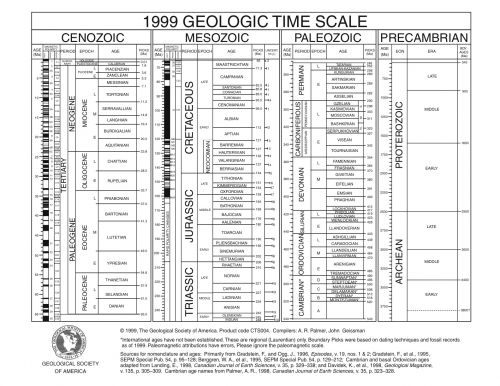 In the screencast below, I point out the markings indicating episodes of normal and reversed polarity as shown on the 1999 GSA geologic time scale.

This is a portion of the Geological Society of America’s version of the geologic timescale. Starting with the Cenozoic Era. This is today. Time goes backward down this axis and picks up again here in the Mesozoic at 65 million years ago. And then time keeps on going backward, down to about 250 million years ago. What I want you to see is that next to these ages — here’s 10 million years ago, 15 million years ago and so on — the direction of the Earth’s magnetic field is recorded. Each of these black bands, like this one, is showing times of normal polarity in which the Earth’s magnetic field is aligned the same way it is today. Then each of these white bands; for example, right here, here, and down here, show times when the field was reversed compared to today’s field. You can see that there are several reversals, many many. They don’t happen in any particularly periodic way, and they happen for different lengths of time.