In this lesson, we'll explore the Earth's interior. We'll find out what materials Earth is made of and determine their properties by making some measurements using seismic waves.

Let's start with a basic description of what's down there. Earth has three major concentric shells of chemically distinct material: the crust, the mantle, and the core. (See figure below and my screencast explanation.) 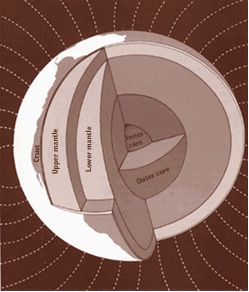 Schematic diagram of the interior of Earth showing its concentric rings of material much like a jawbreaker candy. The crust, mantle, and core are the major layers whose compositions are chemically distinct from one another. Geophysicists also differentiate between the upper and lower mantle and between the inner and outer core.
Credit: usgs.gov/gip/interior/

Here is a schematic diagram of a cross-section of the Earth. You can see this tiny thin part here is the crust. From the base of the crust, all the way to this boundary is the mantle. And from this boundary, all the way to the center of the Earth is called the core. We also distinguish between the upper and lower mantle. That is this boundary right here. And the inner and outer core. That is this boundary here. So how do we decide where to actually place these boundaries? That knowledge comes from observations of seismic waves. In fact, we can use observations of seismic waves to tell us a lot of other things about the composition of the interior of the Earth such as its exact mineralogic composition and the pressure and the density and temperature.

The crust is Earth's outer shell. It's the thinnest layer, but it is still important, mostly because it's where we all live! Also, during Earth's formation, when Earth became layered, the thin veneer of the crust retained some of the interesting metallic minerals that otherwise all went to the core because of their weight. This has been important for people because we've figured out how to extract these minerals and use them for industrial purposes. The crust is just a few kilometers thick at spreading ridges in the ocean, and as many as 50-80 km thick under continental mountain belts such as the Himalayas, but even at its thickest, the crust is quite thin compared to the radius of the Earth, which is about 6370 km. The most abundant rocks in the crust are silicate minerals, such as feldspar, quartz, mica, and amphibole.

The mantle occupies the most volume of the Earth; it extends from the base of the crust down to almost 3000 km depth. It is composed mostly of silicate rock, but denser forms of silicate than are commonly found in the crust, such as olivine, garnet, and eclogite.

The radius of the core is about 3000 km (almost half of the radius of the Earth). Its density is about twice that of the mantle. It is most likely made up of an alloy of iron and nickel, with some other heavy metals thrown in there as well.

The Earth has a dynamic interior

As models and measurements have become more sophisticated, the simple diagram above has been shown to be too simplistic. Instead, geophysicists envision a planetary interior that looks more like the figure below. (Also see my screencast explanation of the same figure.) Alternatively, you can read an approximate text transcript of my screencast of the modern view of Earth's mantle. 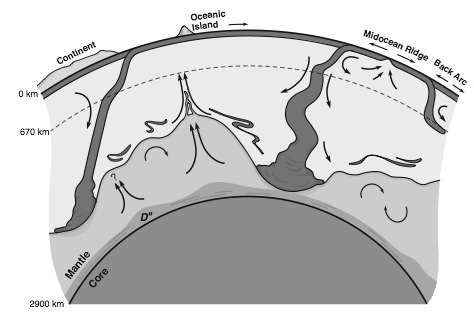 This schematic diagram is a much more up to date version of what we think is going on in the interior of the Earth, at least in the mantle. The take-home message here is motion. See all these little black arrows everywhere. They are showing you that the mantle is not actually just statically sitting there. It is moving around all the time. The thing that drives that motion is internal heat. The core has a lot of excess heat from the formation of the Earth and from the decay of radioactive elements. It needs to get rid of that heat somehow. The way it does it is by convection. That means moving hot material from one place to another where it can give that heat away. From the core mantle boundary up, first of all, you have got this weird D double prime layer where strange things happen to seismic waves that get in there. Here is a plume of material that is buoyantly rising because it is hot. This has been posited to be the source for hot spot volcanoes like this one in the picture here. We also have arrows that show things that are sinking. Right here is a cross-section of a subduction zone and you can see the slab is sinking. A lot of slabs get sort of hung up around 670 km depth. This is where the mantle has an increase in density and so it is harder for a sinking slab to get through there but they do get through most of the time. When they do the material that composes them piles up down here so it can later be recycled into whatever the rest of the mantle is doing. The take-home message here again is motion. But I want you to also remember that we are talking about solid rock here. It is by no means a liquid, so that motion is happening on very long timescales.

Notice all the little black arrows in the illustration above. Those arrows show movement of material in the mantle. The core loses heat to the overlying mantle. This heated material rises buoyantly to the surface. In this model, the core-mantle boundary is posited to be the source for mantle plumes that give rise to hot spot volcanism at the surface. You can also see some arrows showing heat escaping at a mid-ocean ridge. Heat escapes as new hot crust is formed at the ridges. Far away from a mid-ocean ridge, old cold oceanic lithosphere sinks at a subduction zone. Images from seismic velocity measurements show that these lithospheric slabs can sink all the way to the bottom of the mantle, where they pile up. Whether or not this material eventually becomes well-mixed with the rest of the lower mantle or remains in its own chemically distinct pool is still a topic of debate. So, the big idea to take home from this diagram is that the mantle of the Earth is in constant motion, driven by heat. This motion, however, is quite slow because the mantle is not a liquid, but is actually solid rock.

Think about it and then click to read my answer

A lava lamp is similar to the mantle of the Earth because it has material that is heated, rises buoyantly, then cools and sinks. Convection.

A lava lamp is different from the mantle of the Earth because the Earth has an internal heat source, which is the heat of initial formation of the core as well as radioactive decay. In contrast, a lava lamp has an external heat source, usually a light bulb or something else that has to be plugged in or turned on. The mantle is solid rock and is composed of a variety of silicate minerals whose degree of mixing is still debated by scientists. It moves over long timescales. A lava lamp contains two immiscible fluids so that a person can have fun watching them move on short timescales.

‹ Overview up But How Do We Know What's Down There? / Reading & Discussion Assignment ›
EARTH 520: Plate Tectonics and People