But How Do We Know What's Down There? / Reading & Discussion Assignment

The deepest boreholes only go several kilometers into the Earth. A mine is the deepest place a person can go into the Earth (see Eliza, below) and while it's pretty incredible down there, even being deep in a gold mine does not offer much information about what the Earth is like hundreds or thousands of kilometers below the surface. 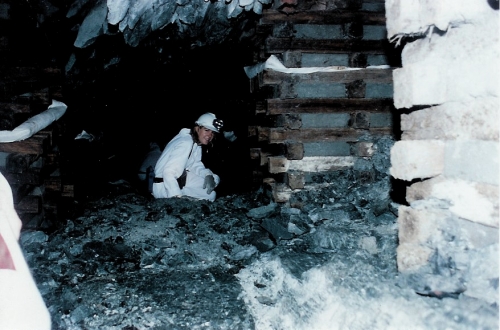 Eliza at about 3.5 km depth in a gold mine south of Johannesburg, South Africa.
Source: S. Webb

Since we can't go to the center of Earth, we have to rely on indirect observations of the materials of the interior. These observations mostly come from seismic waves. When an earthquake occurs, energy is radiated from the location of the earthquake in waves that travel through the Earth and arrive at seismometers at some distance from the source. The speed of these waves through the Earth is controlled by the properties of the material that the waves pass through. By measuring the time it takes for various waves to get from an earthquake to a given seismometer, scientists can back out what the material properties must have been like along the path taken by the wave.

Cool historical side note: The major boundaries of the Earth's interior were discovered by seismologists.

In 1909, Andrija Mohorovičić, a Croatian seismologist, discovered the boundary between the crust and the mantle by observing the sudden increase of seismic waves as they passed from the crust to the mantle. Because of the sudden jump in wave velocity, he was able to infer that there must be a change in the composition in the rocks at that depth. The boundary between the crust and the mantle is generally known as the "Moho" since most scientists had trouble finding the special characters needed to write Mohorovičić's entire last name correctly using a western keyboard. ha ha, only kidding. "Moho" is merely used because it is a shorter word. In 1912, Beno Gutenberg used observations of the sudden drop in P wave speed together with the observation of a "shadow zone" in which direct P and S waves do not arrive at seismograms a certain distance from the source (more on this later in this lesson) to calculate that the depth of the core-mantle boundary must be at about 2900 km. In 1936, Inge Lehmann observed a second "shadow zone" within the core itself to discover the boundary between the inner core and the outer core.

Seismic waves aren't the only way scientists try to figure out the properties of the interior of the Earth. Some geophysicists try to simulate conditions in the deep Earth by heating and squeezing likely mineral assemblages to see how they behave under the intense pressure and temperature regimes of the lower mantle and core. One way this is done is in a diamond anvil cell. The mineral assemblage of interest is squeezed between diamonds and sometimes simultaneously heated with a laser in an attempt to achieve the enormous temperature and pressure deep in the Earth. People are often impressed by the size of a diamond anvil apparatus, and I don't mean because it is so big! Check out the photos of one below.

Diamond anvil cell for conducting high-pressure mineralogic experiments assembled (left) and disassembled with a US quarter for scale (right).
Photos by Mark Fortney of Virginia Tech 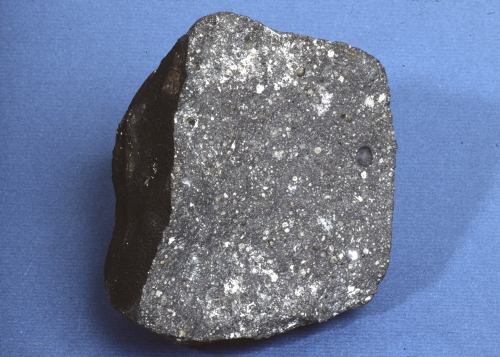 Allende, Mexico, carbonaceous chondrite. This chondrite contains chondrules (note the round cavity left by the removal of a large chondrule). Allende, like many carbonaceous chondrites, contains calcium-aluminum-rich inclusions (CAIs). Unlike chondrules, which are round and composed mostly of silicate minerals like olivine and pyroxene, CAIs are predominantly white to light gray in color, irregularly shaped, and rich in refractory (high- temperature) minerals like melilite and spinel. They are believed to predate chondrules by at least 2 million years. This specimen is ~ 11 cm from left to right.
Source: D. Ball, Arizona State University

The Dubrovinski & Lin article summarizes the state of the art among mineralogists who are studying the composition of the deep Earth. The Anderson & King paper offers a perspective that the asthenosphere is hotter than we thought and may be the source of non-subduction-zone volcanism. When you read them, think about the following questions for discussion:

Discuss in Canvas, starting with these questions

You will be graded on the quality of your participation. See the grading rubric for specifics on how this assignment will be graded.

‹ What's Down There? up Optics / Lab Activity ›
EARTH 520: Plate Tectonics and People