A mineral is a homogeneous, naturally occurring, solid inorganic substance with a definable chemical composition and an internal structure characterized by an orderly arrangement of atoms, ions, or molecules in a lattice.

Wow, that's kind of a mouthful, but each part of the definition is easy to explain.

It is a common urban myth that glass acts like a liquid over long timescales. This myth, mostly perpetuated by tour guides in cities with old windows, is "proven" by pointing out to onlookers that the window glass in old buildings is thicker at the bottom. This is used as "evidence" that the glass flows downward over time due to gravity and has piled up at the bottom of the pane. Actually, the fact that old windows are thicker at the bottom is an artifact of an old method of glass-blowing, called the "crown glass procedure." In this method, still-molten glass was spun on a disc to flatten it as it cooled. This had the effect of making the disc fatter at the edges. Then the panes of glass were cut with an asymmetrical thickness built in to them. These panes were then usually installed with the thick end down because that is more stable. For a more detailed analysis of this topic, check out Plumb, 1989. "Antique windowpanes and the flow of supercooled liquids." J. Chem. Educ., 66, pp. 994-996.

In order to discuss the the classification of various types of minerals, let's take a quick look at the Periodic Table of the Elements and review some simple atomic chemistry. All elements in the periodic table are made of one kind of atom, with a specific number of protons in its nucleus. The number of protons in the nucleus is the atomic number of the element. Below is an image of the periodic table. I assume this is familiar to you from high school and college! 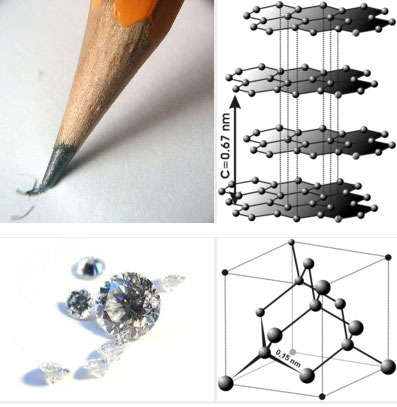 Pencils write because layers of graphite easily slip past each other and can coat another object, such as paper, with just a little pressure (top left). The crystal lattice structure of graphite (top right). Diamonds look a lot different from pencils! They are the hardest mineral known (bottom left). The crystal lattice structure of diamond (bottom right).
Figure source: http://mrsec.wisc.edu/Edetc/nanoquest/carbon/index.html