In order to identify the unique suite of minerals found in the soil on Camarena's body, we must first acquire some knowledge about the tectonic history of the area. Then we can narrow our scope to the actual volcano that produced the minerals in question.

Below is a map of the plate boundaries near the western coast of southern Mexico. See if you can apply what you've learned about plate boundaries and map-reading from previous lessons to make a mental picture of the interactions of all the plates and faults depicted on the map, then watch my screencast to hear me explain what I see when I look at this map.

The map below zooms in on a section of the first map (note that the rectangular dotted line corresponds to the rectangular box on the first map) and gives details about the volcanic history of this region. We can see from this map that this has been quite an active region volcanically. There are two distinct episodes of volcanism mapped. The shaded areas show basalt flows that have been dated between 9 to 11 million years old. On top of that is a younger (less than 7 million years old) deposit of rhyolitic lava. Each little dot is a separate volcanic vent.

The difference between a vent and a volcano is that a vent emits volcanic products (gas, lava, ash, etc.) but is not necessarily a mountain. Vents can be minor and often occur on the flanks of active volcanoes where lava and gas have found a different weak spot to escape from other than the main crater. Another feature on the map below is the number of collapsed calderas. These are shown as ring-shaped normal faults with the dip lines pointing inwards to show a circular depression. Collapsed calderas are formed when a large explosive volcanic eruption has blown away the magma chamber as well as the entire volcano, leaving behind a giant crater-shaped depression. Many of these calderas will still have active vents or resurgent volcanoes at their centers. Follow along with my screencast to hear me describe the details of the map. 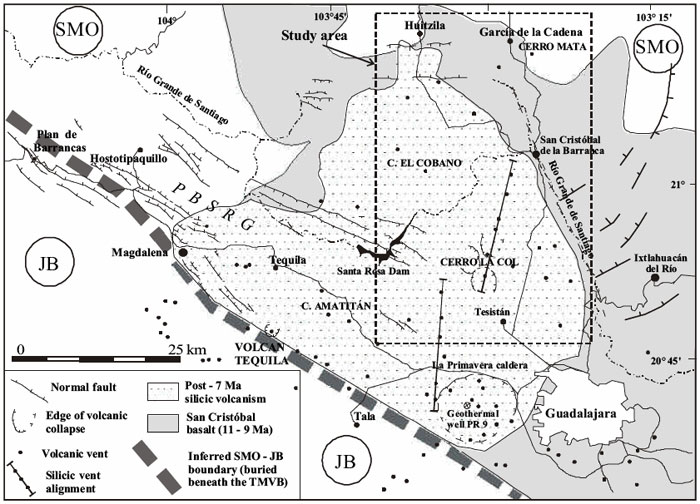 Here is a more detailed map of subduction zone volcanism on the west coast of Mexico in the Guadalajara region. Let us orient ourselves. Here is the metropolis of Guadalajara. Here is the town of Tequila over here. True fact for the day. The Jose Cuervo distillery is actually in this town. To get a volcanic history of this region let us go back about eleven million years. That is when the San Cristobal basalt was erupting. That eruption spread out over everything within this boundary here given by the darker shading in this figures. It goes off the map to the southeast and all the way back around so it covers everything within there. Basaltic eruptions are usually high temperature and low viscosity which means they flow pretty readily. Think of Hawaii. And they cover everything. All this area was covered by basalt. Then about seven million years ago the character of the lavas coming out of these volcanoes changed. They became more silicic. An example of a silicic lava is a rhyolite. The area covered by those lavas is shown by the stippled region and I am outlining it, too. Rhyolites are much more viscous. They melt at a lower temperature, and so they are kind of like the toothpaste of lavas. They are so viscous and they often have a lot of gas trapped in them that they lead to very explosive eruptions. Sometimes they are so explosive that they blow away the entire mountain during the eruption. There is evidence that that did happen here. All these circular features denoted like this are collapsed calderas. These happen when you get a giant eruption that blows away the entire mountain and leaves a little depression behind. Volcanism can still happen in there. La Primavera caldera is one of these little calderas and it is right here. It is in a line of other rhyolitic vents. Here is another one. All these other little dots are other rhyolite vents. So this was a very very active region.

As we were just discussing, collapsed calderas are formed when a large explosive volcanic eruption has blown away the magma chamber as well as the entire volcano, leaving behind a giant crater-shaped depression. Often, calderas are associated with rhyolitic lavas because rhyolite, with its high silica content, is viscous. See the chart below for a comparison of the viscosity of different lavas. Viscosity is a measure of resistance to flow. Lavas with high viscosity tend to form steep-sided volcanoes and often the lava cools right on top of the main vent, essentially plugging it up. Then, pressure builds up in the magma chamber as gases, ash, and lava want to escape but can't. When the pressure finally exceeds the strength of the plug and the eruption happens, it may be so violent that an extremely large volume of ground is blown to smithereens. Historically, large and destructive eruptions, such as Krakatoa and Tambora, happened this way. Note on the map above the sheer size of some of the calderas in the stipple-shaded region that marks the rhyolitic lava flows. La Primavera caldera, at the heart of our story, is shown as one of the many silicic vents in this region. 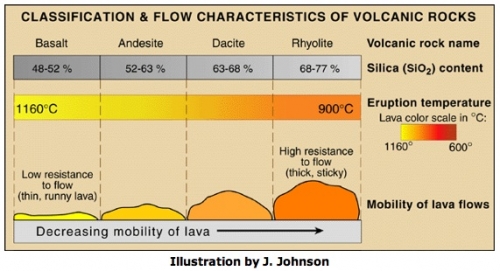 Temperature and composition both affect viscosity. The same substance at higher temperature will usually be less viscous. Think of an ordinary substance like candle wax. When you heat it up it gets more runny, but it is always wax, it has not changed what it is made out of. Two different mineralogies will normally have different viscosities depending on their silica content. The higher the silica content, the higher the viscosity. But note the actual numbers in the classification chart! Geologists talk about basalt as "low silica" but that's only in comparison to other lavas. In fact basalt is about 50% silica!

Below is a photo of the piney, mountainous state park in Jalisco described in "Death of an Agent." 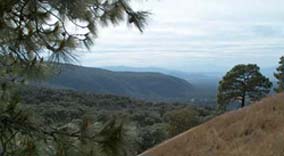 The photo below shows an outcrop of rhyolite tuff. A tuff is deposited as an air-fall ash layer from an explosive eruption. Up close, you'd see that each grain is full of air bubbles that were trapped in the rock particles when the ash cooled as it flew through the air. The scale of this outcrop gives an indication of the massive eruption that produced this ash layer. 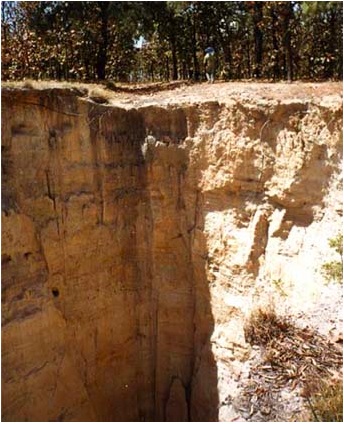